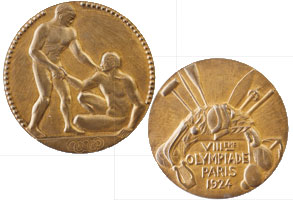 The opening of the 2012 Summer Olympics on July 27 in London, England, brings to mind Lafayette’s Olympic champion, J. Alfred “Al” LeConey ’23. He ran the anchor leg for the American 4×100-meter relay team at the 1924 Summer Olympics, which took the gold medal with a world record time of 41 seconds.

LeConey (1901-1959), inducted into the Maroon Club Hall of Fame in 1976, set numerous sprint records at Lafayette including a 9.7 clocking in the 100-yard dash, which held until 1974. He won the 1922 Amateur Athletic Union championship in the 220-yard race and, as a Lafayette student, the Intercollegiate Association of Amateur Athletes of America (IC4A) championships in the 100- and 220-yard races. 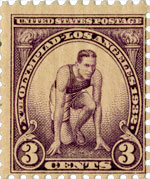 A photograph of LeConey at Lafayette was used by the U.S. Postal Service for a 1932 Los Angeles Olympics commemorative stamp.

The 1924 Olympics is the setting for the 1981 Academy Award-winning film, Chariots of Fire, which tells the story of two runners for Great Britain. One of them, Harold Abrahams, competed on the British 4×100 meter relay team, which won the silver medal to America’s gold.

A number of items related to LeConey’s historic achievement are housed in Lafayette’s Special Collections including the gold medal and accompanying diploma, participant medal, scrapbook, and porcelain Olympic commemorative vase.

The 1924 gold medal (above left) was designed by Andre Rivaud and struck by the Paris mint. The obverse side features a winning athlete helping a fallen athlete and the reverse depicts sport equipment around the legend. The sport and the winner’s name are engraved on the rim. 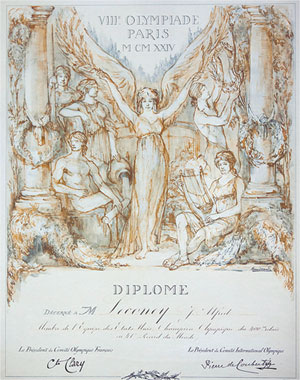