As with all college students, only a portion of student-athletes’ learning occurs in the classroom. But for Division I athletes at Lafayette and elsewhere, opportunities to learn through study abroad are limited by the demands of competing in their sports.

With that in mind, the NCAA permits teams to take trips outside of the United States every four years to supplement students’ educational and playing experiences. Lafayette’s field hockey and men’s basketball teams took advantage this year, each traveling to Europe for 10 days.

During spring break in March, the field hockey team, coming off a Patriot League championship in 2011, went to England. The basketball team was headquartered in Brussels during May.

The field hockey players and coaches undertook fundraising efforts throughout the year and combined that with contributions from alumni and parents to finance their trip. The Leopards spent time in Nottingham, Cambridge, London, Repton, and Liverpool, playing four games.

“Field hockey is such an international sport that we really could have gone to South America, Africa, Asia or other places in Europe,” says head coach Andrew Griffiths. “England made a lot of sense because we had connections and were able to personalize our program’s experience and achieve the right level of competition.” 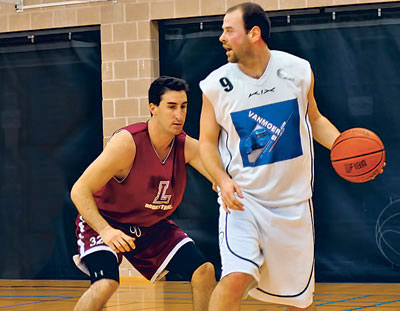 Connections were particularly strong in Repton, in South Derbyshire, where Griffiths attended Repton School as a teenager. He went on to play in 214 games, including the 2000 Sydney Olympics, for the Canadian national team. Griffiths also competed against another Old Reptonian, Martin Jones, now the school’s director of field hockey, in England’s Premier League. A former member of England’s national team, Jones currently plays for the Beeston Hockey Club while coaching his Repton squads to national acclaim.

“I really wanted the players to see the culture of the sport in another country,” says Griffiths. “The club system is prevalent in many countries, including England. On any given Saturday, you might have a youth boys’ or girls’ game preceding a game of older players before the main club team plays.”

Haley Keenan ’14 says, “The cultural respect for the sport of field hockey in England will always stick with me. Its popularity among both males and females starting at a young age was inspiring. On one of the last days, we were able to play after a rivalry day that could be equated to our rivalry with Lehigh.”

Griffiths also wanted the team to experience another culture, since many of the players had not traveled internationally.

One group took a walk along the Thames River. “The weather was perfect, and we had Big Ben as the backdrop,” blogged Keenan and Nicola Coakley ’15. “After crossing the bridge, we explored Trafalgar Square and Westminster Abbey.” Everyone had the opportunity to experience the famous London Theater district. They attended Lady Killers. “The play may have been targeted for a much older crowd but it was still very entertaining, humorous, and a great cultural experience,” blogged Kristen Heaney ’14 and Mara Kish ’13.

“The trip was much more than just an on-field learning experience,” Keenan adds. “We were able to take in England’s sights and history with teammates who have become family. Having lunch with field hockey players at a local boarding school, talking with the students about accents and pop culture, and holding a clinic for the elementary school boys are only some of the experiences that made our trip distinctive.”

For men’s basketball coach Fran O’Hanlon, who has coached, played in, and visited more than 60 countries, international travel experiences have helped shape his life. He hoped to give his players a sampling of international travel normally not afforded due to their academic and athletic time commitments.

“Because our sport crosses two semesters, the team members don’t have an opportunity to study abroad, and these trips supplement their education in a similar way,” O’Hanlon says. “We chose Belgium because it is centrally located, which allowed us to experience a number of cultures and countries in a short time.” Based in the Brussels’ suburb of Mechelen, the team traveled to Antwerp, Bruges, and Brussels in Belgium and took longer excursions to Amsterdam, London, and Paris.

“Lots of my friends have spent semesters abroad and told me how much fun it is, but this trip is something that few can experience, traveling all through Europe with your teammates—playing basketball while having plenty of time to yourself to explore what Europe has to offer,” says Jack Detmer ’14. “It’s a once-in-a-lifetime opportunity. We were able to travel to many towns and cities and experience different parts of Europe.”

During a London day visit, the group happened to arrive at Buckingham Palace in time for the changing of the guard. “Thousands of people were standing at the gates,” blogged Joey Ptasinski ’15. “There was a band, countless metropolitan police officers, and a large number of guards. It was quite the show.”

For O’Hanlon, as for Griffiths, the level of competition was important, and a national-level squad provided tests for a youthful group. The team split a pair of games against the under-20 Belgian national team.

“It was very good for us to play against them. We were a little lucky with our timing because they were preparing for the European championships this summer. In a lot of years, teams of that caliber would not have been practicing together,” O’Hanlon says.

“Beyond being a great cultural experience, it’s a bonding experience,” he adds. When we’re losing so many seniors (six), it gives us a head start for the following season. In 2007, we went 4-0 on our trip to Italy, and we were 3-1 on this trip. Hopefully this will prepare and inspire our team to work even harder over the summer.”

Ptasinski blogged: “Exploring four different countries brought us closer as friends and as a team. We were given the unbelievable chance to learn about ourselves and each other while being immersed in different cultures.” 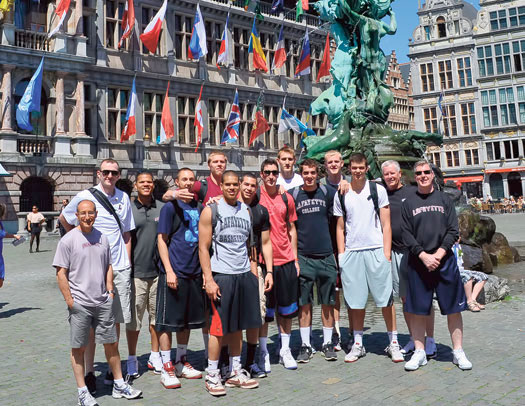 While in Europe the men’s basketball team (above) visited Antwerp’s central square and its monument honoring the city’s mythical hero, Silvius Brabo, and the field hockey team enjoyed time along the River Thames in London. 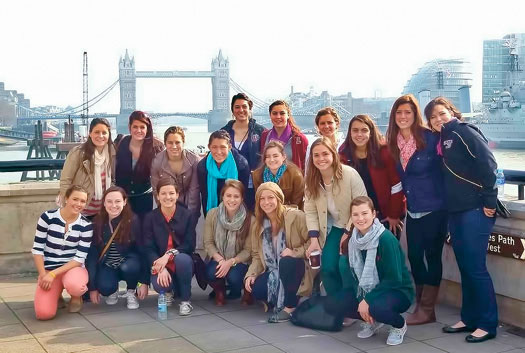