Having the capacity to hear and respect the perspectives of those who are different from oneself calls for awareness and conscious effort. It requires willingness to “walk a mile in my shoes,” as Joe South captured so well in his hit song of 1969.

And Danyelle Smith ’14 agrees, saying that one way to help people understand different perspectives is to role-play. “When you put people in different roles, they are more likely to be at least empathetic to how others may be hurt or offended,” she says.

Smith was selected to serve as a Student Coordinator of Peer Education (or SCOPE) in the College’s new peer-education program called Kaleidoscope, which focuses on issues of multiculturalism, equity, and social justice. She’s among 21 SCOPEs who are working to raise awareness, promote inclusiveness, and prompt genuine celebration of differences across campus.

“One thing that we always touch on in the conversations we lead is ‘we as a human race.’ Although we are individuals and were born into or choose to be part of different groups, at the end of the day we are all human beings with similar wants, needs, and values,” Smith says. Having received training in the complexities of diversity issues and in facilitation and group-leadership skills, the SCOPEs are out on campus facilitating conversations on social justice topics in response to requests from student organizations, athletic teams, and even informal groups of friends.

“I believe that in order to have a socially just world, people must be able to identify with those who are different from them,” says Madeline Gambino ’14, another SCOPE. “There are a million ways to be distinctive, and in some way every person will be a member of a minority group at some point in life, whether through ethnicity, gender, sexual orientation, religion, economic background, political thought, or simply the way in which they view the world.”

Kaleidoscope was launched by John McKnight, dean of intercultural development, in the fall. It builds on a robust multicultural competency-training program for resident advisers (RA) and orientation leaders that was already in place.

“I thought Kaleidoscope would be a natural extension of that training experience,” McKnight says. The initiative is made possible by funding from the Teagle Foundation, which awarded a $300,000 grant to Lafayette, Bucknell University, and Dickinson College for a cooperative project aimed at enhancing diversity and diversity education.

Members of the campus community nominated students for selection as SCOPEs on the basis of their intellectual capacity, leadership potential, and demonstrated commitment to advancing social justice. McKnight also met with academic department heads to explain the program and seek nominations.

“We sought students with diverse academic interests and personal identities, and who possessed social capital on campus as a result of their affiliations,” he says. The SCOPEs’ foundational program, as they call it, is “Social Justice 101.” Groups wishing to have Kaleidoscope tailor a program centering on a specific topic — such as race, religion, gender, sexuality, socioeconomic status, or other — must experience Social Justice 101 first.

“It introduces terms such as individual vs. group identity, dominant and subordinated identities, power, and privilege,” McKnight explains. “It’s important for students to have this language in their lexicon, so they can expand their notions of diversity and multicultural competence beyond simply policing their language and refraining from offending others. Although those are important goals, a truly multiculturally competent person possesses the cultural knowledge, awareness, and skills to recognize systems of inequity or injustice.” 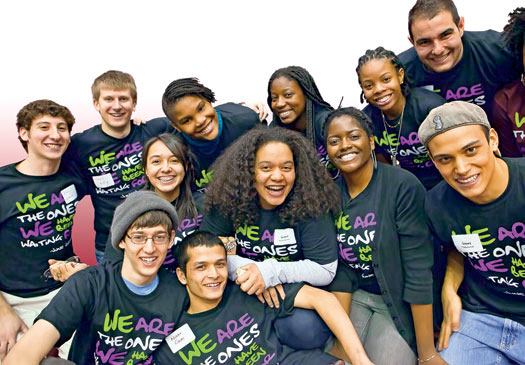 On the Saturday before spring classes began in January, SCOPEs facilitated small-group discussions during a retreat for Lafayette student leaders called “Finding We.” Sponsored by the Office of Intercultural Development, it was attended by about 230 elected and appointed leaders of student organizations of all kinds.

“The retreat was established as a direct result of the Campus Climate Study,” McKnight says. “After multiple meetings with members of every Lafayette constituency, the Campus Climate Working Group decided that the most logical place to start a conversation about the barriers among groups is with student leaders across every area of the campus.”

The aim of the retreat was to promote dialogue among the student leaders and encourage them to build coalitions across their varied interests and campus affiliations. The discussions that SCOPEs led there were similar to the ones they’ve facilitated in other settings.

“We try to raise students’ awareness,” Gambino says. “Doing so requires that we create a safe place for them to explore what they may consider risky or uncomfortable topics. Students are afraid to discuss questions of race, gender, sexuality, religion, and other matters of social justice for fear of saying the wrong words or offending someone. By reminding everyone to expect good intent from others, we teach participants how to protect themselves from fearing that their words might be taken the wrong way and to allow others to voice their concern about words that might be considered offensive.

“We also make it clear that we are still learning as well,” Gambino adds.

Social justice is about more than ensuring equality of legal, economic, and political opportunities for individuals and groups of different backgrounds. It is also about having an awareness of the differences and the privileges, struggles, expectations, and prejudices that come with them.

“Some people have difficulty realizing that a person can be an individual, a member of one or more socially constructed groups, and a human being,” says SCOPE Evan Gooberman ’13. “People want to pretend they don’t see differences in order to defeat their own prejudices, but in reality we should celebrate differences while simultaneously celebrating similarities.”

Already, Kaleidoscope is growing and expanding its reach. During spring semester, SCOPEs worked with student groups to design additional programs.

“For example, if there is a residence hall floor where several students appear to be struggling with body image, the RA can contact Kaleidoscope to design a program to address some of the social justice topics related to that particular issue,” McKnight says. Soon, SCOPEs will team up with residential communities, and most halls will have a live-in SCOPE who is available for one-on-one consultation and for facilitating group dialogues.

“I think we all have been surprised by how quickly we have developed a name on campus and a positive reputation,” McKnight says. “After just one semester the community knew that we were here. My goal with this program was to create more conversation around social justice topics on campus, and we are meeting that goal.”