Congratulations on the story “Play by Nguyen ’15 Performed at Wilma Theater” in the recent Lafayette Magazine (spring 2012). How exciting it must be to have such a fresh and astonishing new voice in American theater on the campus. I know Philadelphia’s Wilma Theater well, and regard highly its mission of providing a most welcoming and essential venue for emergent theater artists in America. It enjoys a national reputation for doing so. That it has tapped Huong Nguyen ’15 is a testament to her achievement and proof of faith in her promise and potential.

The article itself illumines what few people know about a playwright’s creative process — the transition from page to stage, the new light brought to the play by new actors, by time, by her maturity. And yes, there are times when the words we write can, in the new light of day, make us cringe. That she so charmingly and with humility shares all of this is simply astonishing and refreshing. Any and all budding and hopeful writers can take comfort from her words.

Finally, as only a poet can, she lovingly and with great insight makes the connection between science and art — mathematics and the creative process, describing why Lafayette is a wonderful place to pursue her loves, where one nurtures the other.

Lafayette College is simply an outstanding academic institution. The students’ work in the neuroscience field (“Students Present at International Neuroscience Conference”) demonstrates the College’s phenomenal ability to grow and offer its students a wonderful education.

I strongly feel that the field of neuroscience will play a major role in the field of medicine. These students and faculty advisers deserve a tremendous amount of credit and make me even prouder to be a graduate of Lafayette. I am grateful to have had teachers like Dr. Bernard Marklein in chemistry.
— Bob Franco ’75
Ponte Vedra, Fla.

Over the years, I’ve never seen mentioned in Lafayette Magazine an event that I’ll never forget. In November 1940, the year that Lafayette’s football team was undefeated, the last game played was against Lehigh on their home field. Walt Zirinsky ’42 was the quarterback of fame. Before the opening kickoff, the Lehigh fans chanted, “Zirinsky is a farmer.” However, at the end of the first half, after Lafayette had pretty well decided who was to win, the Lehigh fans chanted, “We wish we had some farmers.” You can imagine how surprised the Lafayette fans were at the change of events! 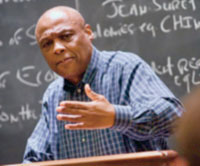 Professor John McCartney (see article) was an excellent teacher and a great man. As a government and law major, I had the great honor of not only taking several of his courses, but also having him on the faculty committee for my honors thesis defense.

Years later, I introduced him before a speech he gave to the Central Connecticut Alumni Chapter. As I noted then, he had a great and positive impact on my academic career at Lafayette and later in pursuing my J.D. in the United States, as well as my LL.M. at a European university. The emphasis he put on exam preparation served me well through my studies for graduate degrees, for bar exams, and even today, in the manner in which I prepare oral arguments for court.

I’m glad that I had the opportunity to let him know what he meant to me, and to express my gratitude. Lafayette is a far better place today because of the impact he had on the College and the many graduates that he mentored and influenced.

Send us your thoughts about this issue of Lafayette Magazine.

Letters may be edited for length and clarity.