If imitation is the sincerest form of flattery, then praise for Lafayette faculty past and present resounds at top colleges and universities across the country. The alumni featured here went on to graduate school and became professors themselves. Many agree that what set them on the track to teach in higher education and, in some cases, conduct research as well, was the influence of a professor who had been a role model. Some teach at institutions very much like their alma mater, while others teach at universities. But they all have one thing in common — a deep commitment to providing their students with the same opportunities and support they found at Lafayette. 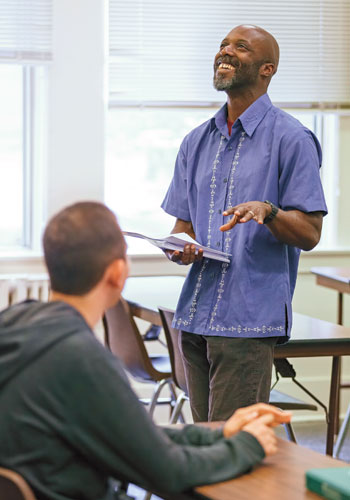 For Ryan Van Horn ’04, assistant professor of chemistry at Allegheny College, relationships with his professors were the biggest influence on his decision to become a professor himself. He credits James Ferri, associate professor and head of chemical and biomolecular engineering, and J. Ronald Martin, professor emeritus of chemical engineering, with inspiring his choice to teach at a small liberal arts college and provide research opportunities to undergraduates.

“My main focus is in the classroom and on using research as a learning experience,” explains Van Horn, who holds a Ph.D. in polymer science from University of Akron. “Close relationships with students are beneficial for my success as an educator. They provide constructive feedback so that I may improve my teaching techniques. If I had not attended Lafayette I would not have realized the value in that type of education.”

One of today’s leading thinkers in business ethics and legal philosophy, John Hasnas ’74 says, “Lafayette provided me with an excellent basis from which to pursue a career of ideas. I received a wonderful education and worked with caring and inspiring professors, including Professor Ralph Slaght, Hogg Professor Emeritus of Philosophy, who taught me how to structure my thoughts, to create persuasive arguments; he taught me the art of reasoning.”

After earning his J.D. and Ph.D. in legal philosophy from Duke University, Hasnas decided his passion lay more in pursuing the questions that lie beneath law rather than the practice of law itself. He earned a master of laws in legal education at Temple University and is now associate professor of business at Georgetown University’s McDonough School of Business and visiting associate professor of law at the university’s law center. He recently launched Georgetown’s new Institute for the Study of Markets and Ethics.

Like Hasnas, James Simmons ’65, professor of biology at Brown University, credits faculty mentors with not only inspiring his love of learning, but with influencing everything from his teaching style to his research interests. An expert in bat echolocation, he seeks to understand the nature of perception. He studied with Burton Cohen, former professor of psychology, who researched hearing for the Navy and who taught a course on sensation and perception that captured Simmons’ imagination, and Howard Gallup, professor emeritus of psychology, who fanned the flame of scientific experimentation.

Recalling the exuberance of his professors, Simmons’ pedagogical methodology sometimes includes, as he jokes, “waving my hands and yelling a lot,” adding, “it’s hard to teach science, but it is part of what you do.” Simmons, who earned his Ph.D. in psychology from Princeton University, adds, “If a scientist is so concerned about his own personal career, rather than teaching students, sooner or later that person’s contributions are going to disappear.”

That’s why Simmons is a strong advocate for and participant in the Lafayette Alumni Research Network (LEARN) program, in which Lafayette students intern with alumni in the neuroscience fi eld. He has hosted a student in his lab each summer for about a decade. Another LEARN cheerleader is Lisa Schrott ’87, associate professor of pharmacology, toxicology, and neuroscience at Louisiana State University, Shreveport, who has mentored undergraduates through the program for the last eight years.

For Schrott, who earned her Ph.D. in behavioral sciences from University of Connecticut, being a good researcher means being a good student. She learns a lot each day — from the high school seniors she hosts in her lab through the Science and Medicine Academic Research Training program, the LEARN students, and from LSU medical school students and residents. Schrott’s research is focused on difficult behavioral dilemmas, most recently seeking a treatment for the learning and memory deficits caused by Alzheimer’s disease.

While Schrott chose to teach at a large university because her research requires certain facilities and a clinical setting, she still gives her students the kind of small-college attention she received from Christopher Wilson, former Lafayette professor of psychology, Lorraine Mineo, retired general biology lab coordinator and lecturer, and Robert Chase, Dana Professor Emeritus of Biology. In fact, Mineo and Chase gave Schrott her first taste of teaching as a teaching assistant in the general biology labs.

“I love when students make a connection between something they’re learning in class and data from an experiment, or integrate material from two classes and see the world in a different way,” Schrott says. “Some of the most exciting conversations I have with Lafayette students are about the implications of the research we’re conducting.” She notes that the students dig right into the research-intensive medical school environment, and is impressed that they are prepared not only by their rigorous coursework, but also by “Lafayette’s approach of interdisciplinary scientific inquiry emphasizing process-driven questioning that reflects real-world problems.”

Professor of anthropology and chair of the department of psychology/sociology at Notre Dame de Namur University, Belmont, Calif., Bobby Vaughn ’93, says, “At Lafayette I discovered that learning, research, and deep thinking are fun and rewarding.” Today, almost 20 years later, he vividly recalls lectures and discussions with Jim Lennertz and the late John McCartney, both government and law professors. “These were not mere lectures, there were more like performances — performances that dramatized the world of ideas. Their enthusiasm for learning and for teaching rubbed off on me in a major way, and they set a standard that perhaps one day I’ll attain!”

Although at a university, Vaughn teaches in the undergraduate program, which has a liberal arts approach. “Like Lafayette, we have very small class sizes, and I get to know all of my students. My Lafayette experience convinced me that I was most at home in the small college environment, and I’m very fortunate to work in one now.”

Vaughn, a government & law and Spanish major and the 1993 Pepper Prize winner, went on to earn his Ph.D. in anthropology from Stanford University.

“A small educational community can afford students greater flexibility and creativity as they figure out their academic direction,” Vaughn says, recalling that although he was not an anthropology major, Professor Susan Niles eagerly agreed to guide him in an independent study. “With her help I began digging into the history and culture of Mexicans of African descent, research which resulted in a Fulbright fellowship. That study led me toward the world of anthropology, and to becoming a cultural anthropologist. I don’t believe this would have happened at a large university. As a first-generation student, I also benefited from a certain nurturing at Lafayette.” 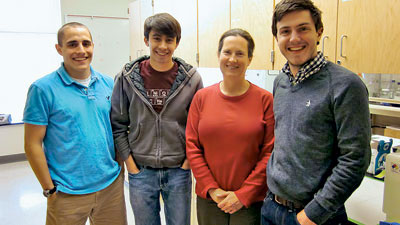 While Vaughn found the “small college” approach within a university, Kristin Fox ’88found a way to continue her research but be in a setting that emphasized teaching where she could get to know her students well. She is associate professor of chemistry and director of undergraduate research at Union College.

Fox first discovered her love of research when using thin-layer chromatography for a project with Joseph Sherma, Larkin Professor Emeritus of Chemistry, and completing an honors thesis in chemistry advised by David Husic, Larkin Professor and head of chemistry. She presented that research at the second National Conference on Undergraduate Research.

Her experience as a teaching assistant while earning her Ph.D. in biochemistry at Cornell University inspired her to go into teaching. “I enjoyed figuring out how to explain information so that other people could understand it. Sometimes I’d spend so much time on my research presentations that it would irritate my Ph.D. supervisor, who wanted me to get back in the lab.

“Cornell has faculty with excellent knowledge and amazing equipment, and I received an outstanding education there,” she says. “All that could not replace the feeling of community that exists on the campus of a small liberal arts college. I missed that, which is why I chose Union. Like Lafayette, it has a vibrant community and emphasizes student-faculty research collaboration.”

The memory of that small-college environment led Jennifer Riddle Harding ’96 from the business world to graduate school and into the profession of higher education. “I wanted to dedicate myself to an intellectual life,” says Harding, assistant professor of English and coordinator of the Professional Writing Program, Washington and Jefferson College. “I wanted a life that included Faulkner.” After two years as a business analyst for an information technology consulting firm, she earned a Ph.D. in English language and literature at University of Maryland.

Harding, who holds an A.B. in English and a B.S. in psychology, says many aspects of her Lafayette experience influenced her decision. “My EXCEL research on metaphor studies with Matt McGlone, former associate professor of psychology, shaped my interest in figurative language that persists to this day,” she says, “and being a Writing Associate taught me how to manage my time and help other writers.” Suzanne Westfall, professor of English, recommended Harding for the program. “She gave me the gentle push that I needed to realize I could not only be a writer, but also a writing tutor.”

Harding learned computer programming through a study with Bill Collins, associate professor emeritus of computer science. Although an unusual subject for an English major to tackle, she says, “This ended up being essential knowledge for my first job as a business analyst.”

“When I was in graduate school, I had excellent mentors, but they all worked at a large research university. They tended to imagine graduate students in similar institutions. Because I attended Lafayette, I could imagine something different,” says Harding. “I don’t have to be too specialized in one niche or field; I love interdisciplinary work. I get to explore my wide range of interests and connect them through my writing and teaching.”

As it turns out, it’s not only Lafayette students that get to reap the benefits of the Lafayette experience.