Built of Vermont granite and Indiana limestone in 1929 and dedicated amid pomp and circumstance in 1930, Kirby Hall of Civil Rights remains a signature edifice at Lafayette and one of the great academic buildings in the United States. The College marked the 80th anniversary of its dedication with new lobby displays and ceremonies Oct. 20. 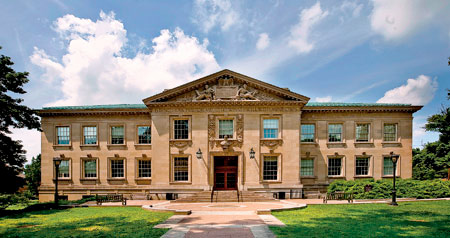 Fred Morgan Kirby, cofounder of the F.W. Woolworth Co., donated $590,000 to construct Kirby Hall. It was his second magnificent gift to the College. In 1920, he had given $100,000 to endow the first professorship in civil rights in the United States. Kirby Hall, the first building in the country dedicated exclusively to the study of government and law, was built to house the department of which that endowed chair formed the nucleus.

The building also is a monument to F.M. Kirby’s commitment to “the study of individual liberty, constitutional freedoms, and the importance of civil rights, a commitment he shared with the College’s leaders in the 1920s,” said President Daniel H. Weiss at the ceremony. “Constructed at a time when communism and socialism were regarded as the greatest threats to the ideals of freedom expressed in the U.S. Constitution, the building reflects those ideals through its exterior and interior design, the paintings and sculpture it housed, and the instruction that took place inside.”

Developed by a working group of students, faculty, and staff, Kirby Hall’s new displays illuminate the building’s history and design and celebrate the advancement of civil rights in America and at Lafayette during the last eight decades. The group was formed after student leaders expressed questions and concerns about the context and meaning of Kirby Hall’s dedicatory plaque, inscriptions on the building’s exterior, and other features of its design and decoration relating to the themes of civil rights and diversity.

“The way in which Americans view civil rights has obviously changed dramatically over the past eight decades. Our students, in particular, were eager to see this building reflect more recent developments and new ideas,” Weiss said. In addition to the displays, a plaque was installed that provides context to the wording of dedicatory plaque. The new inscription reads:

The dedicatory plaque for the Kirby Hall of Civil Rights includes excerpts from Fred Morgan Kirby’s Deed of Gift for the Kirby Professorship of Civil Rights, presented to Lafayette College in 1920, which endowed the first course in civil rights in the United States. At that time, the concept of civil rights was a focal point in a vigorous debate about capitalism and socialism, individual rights to private property, and the right of workers to organize and bargain collectively.

Mr. Kirby’s intention for his subsequent gift of Kirby Hall, dedicated in May 1930, was to provide an exceptional academic space in which students, under the tutelage of the Kirby Professor, would be able to study government and law. Lafayette was the first institution of higher learning in the country to dedicate a building to the study of civil rights, a dynamic field now more inclusive of constitutional freedoms and compatible with commitment to equality and liberty for all.

A series of six prints by Faith Ringgold, entitled The Declaration of Freedom and Independence, is on display in Kirby Hall’s auditorium, complementing the many pieces from the Kirby Collection of Historical Paintings that are housed in the building. Assembled by F.M. Kirby’s son, Allan Price Kirby ’15, the collection includes several portraits of U.S. presidents. Ringgold’s serigraphs, printed by art professor Curlee Raven Holton at the College’s Experimental Printmaking Institute, “tell the story of the forefathers’ declaration of independence from the British, along with the African-American struggle for freedom and equality that one day we hope will become an undeniable reality,” Ringgold said.

Karen LeSage ’10, a member of the Kirby Hall Working Group, spoke for the group at the ceremony. “Within one year of the group’s establishment, the artwork in this building has been updated to better reflect prominent figures in the struggle for civil rights. We have given the dedicatory plaque context so that its message will no longer be misinterpreted. And with the additions to the lobby, the space welcomes guests and provides members of our community with snapshots of the progress made by our predecessors,” said LeSage, who is now working for the U.S. Department of Justice.

S. Dillard Kirby ’81, P’13, a great-grandson of F.M. Kirby and the president of the F.M Kirby Foundation, said, “Kirby Hall is a call from my great-grandfather that the study of government and law and civil rights is no less important than economics or engineering or medicine, but rather at the core of all that we do and say here in America.”

“We are grateful that we continue to benefit from the devotion, service, and support of the family that made this building possible,” Weiss said. “Inspired by a vision of civil rights 80 years ago, it will continue to nurture the broadening, deepening, and strengthening of that ideal in the years to come. But at its core, it remains what it has always been, a place where dedicated faculty inspire bright and eager young people.”

Former attorney general Nicholas Katzenbach, who played a key role in the passage of the Civil Rights Act of 1964, delivered a keynote talk. His father, Edward L. Katzenbach, attorney general of New Jersey from 1924 to 1929, spoke at the dedication in 1930. Pulitzer winning author Taylor Branch spoke on “Myths and Miracles of the Martin Luther King Years,” this year’s first event in the Lives of Liberty Lecture Series.

To provide facilities for instruction in the Anglo-Saxon ideals of the true principles of constitutional freedom, including the right of man to own property and do with it as he will; the right to life, liberty, and the pursuit of happiness, and incidentally the right to sell his labor as he chooses; and to enjoy the fruits thereof without molestation or undue restraint; and the study of the attainment of these rights and the development of these ideals in the history of the human race and to encourage individual initiative and attainment among young men. To assist in the training of leaders for trade, industry, finance, and engineering, as well as for positions of public influence in church and state, and to combat doctrines which minimize the importance of leadership and which would restrict the individual from using all his powers to the full. To the glory of God, the service of his fellowmen, and the perfecting of our own life and liberty.

Every man is free to do that which he will provided he infringes not the equal freedom of any other man. (Herbert Spencer)

Every man is architect of his own fortune. (Pseudo Sallust)

Whatsoever thy hand findeth to do, do it with thy might. (Ecclesiastes 9:10)