Liza Roos Prior Lucy ’74 majored in psychology but found her life’s work in her sophomore year when she made a quilt for her boyfriend’s waterbed from 25 navy blue bandanas. “It was a totally amateurish thing,” she says, “so ’70s!” But Lucy’s aesthetics evolved beyond hippie chic and corduroy, and she’s now a renowned designer and quiltmaker and the owner of Glorious Color Inc., New Hope, Pa. Her vibrant displays of color are considered high art and have graced the walls of museums around the world. She collaborates with another celebrated quilter, London-based Kaffe Fassett. Together they have produced four hardcover books and 13 glossy pattern books that feature the duo’s fondness for traditional patchwork. Quilts in Glorious Color, an exhibition of Lucy’s works mounted in honor of the anniversary of the arrival of Lafayette’s first women students in the fall of 1970, is on view through Dec. 31 in Skillman Library’s Lass Gallery.

It’s no surprise, then, that the committee planning events to mark the 40th anniversary of coeducation at the College asked Lucy, a member of the first coed class, to design a quilt. She eagerly agreed and invited women in the classes of 1972, 1973, and 1974 to submit images, photos, and memorabilia emblematic of their special place in the College’s history. The First Women of Lafayette quilt was unveiled Oct. 16 at a special “Morning Toast to Coeducation” during Homecoming weekend.

“It sort of looks like a bulletin board with different images from our time printed on squares of fabric,” Lucy says. Among other images, it includes a fraternity dance, the cover of a Jimi Hendrix album, Birkenstock shoes, a $1,125 invoice for one year’s tuition, fabric from a table cloth from the dining room in Marquis Hall, Life magazine’s coverage of the Kent State shooting, the book Our Bodies, Ourselves (“practically our Bible”), and a clipping from The Lafayette with the headline “Coeds Bring on a New Period.”

“I’m sure someone thought they were being funny with that one,” she says. There’s even a note from one of the women’s first resident advisers that reads, “Do you know what quiet time means?” Creating the quilt has brought back a lot of memories for Lucy, some bittersweet. After college, she married her boyfriend, the recipient of that first quilt, but he died just after turning 30. “Yes, a lot of it was bittersweet,” she says. “But it was also kind of cool to think about the music and reminisce with my daughter, Alexandra [above left], who’s a junior at Lafayette.”

Lucy didn’t apply to Lafayette because she wanted to make history, but she never regretted her decision to enroll, despite the College’s sometimes awkward attempts to make the women feel welcome — “someone on the coed committee had heard that girls like to swap clothing and wear each other’s stuff, so we were paired as roommates by size” — and the fact that not everyone on campus wanted to welcome the women at all. 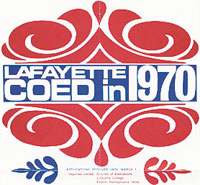 “Keep in mind that the guys three classes ahead of us had intended to go to an all-men’s college,” she says. “Some of the frats pledged never to date a coed, and almost every day for the first few weeks, they’d gather beneath our windows and shout, ‘Panty raid, panty raid!’ That was annoying.”

For the most part, the women ignored the taunts, preferring to focus on more serious issues such as the Civil Rights Movement and Vietnam War. “We just blew them off. In the greater scheme of things, it wasn’t important,” she says. The quilt reflects that era by including a draft card that’s been set on fire, peace signs, and a “Make Love Not War” button.

Quilting has always been considered traditional women’s work, but that doesn’t mean it is drudgery. Like a version of today’s book club, women would gather in each other’s homes and use the art of sewing as an excuse to socialize.

“Quilting provided group therapy and still does in many communities,” Lucy says. “It was their pleasurable downtime and one place they could express themselves.”

That tradition continues with Lucy’s quilt commemorating 40 years of coeducation at Lafayette. “It speaks volumes.”