An experimental black box theater, state-of-the-art film theater, sound stage, and high-tech media and teaching lab are some of the exciting facilities planned for the new Williams Arts Campus in downtown Easton at the base of College Hill.

The College will transform the former Club Mohican and Case’s Tire properties on North Third St. into performing and teaching spaces for programs in theater and film and media studies and construct a new black box theater.

“The Williams Arts Campus will serve as a vibrant gateway to Lafayette and the city and provide exciting new academic and cultural opportunities for students and the community. It will be transformative,” President Daniel H. Weiss said at a news conference Oct. 8. The project has been made possible by a $10 million gift from the Morris R. Williams ’22 family, “which has done so much for the arts at Lafayette and in the community,” Weiss said.

During their lifetimes, the late Morris Williams and his wife, Josephine Chidsey Williams, provided the funding for the Williams Center for the Arts, which opened in 1983 on the College Hill campus. Natives of Easton, they were long-time supporters of civic and cultural life in the city. Their children, Charles K. Williams II and Joan Williams Rhame, an emerita trustee of the College, provided major support for the Williams Visual Arts Building on North Third, which opened in 2001, the first step in the revitalization of the downtown gateway area.

The arts campus project reflects Lafayette’s commitment to make programs in the creative arts an essential feature of the College and ensure that they are known for their outstanding quality, presence, and relevance to both the campus and larger community. It also advances the collaborative efforts of Lafayette and Easton to improve a highly traveled and visible entranceway to the College, the city, and the commonwealth.

“The new arts campus will add a critical dimension to the cultural offerings of our city,” said Easton mayor Sal Panto. “It’s a wonderful example of what can happen when a college and its host city join forces.” 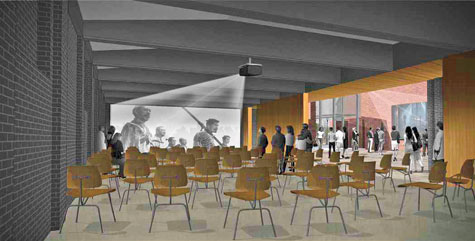 Arts-based development also is supported by Pennsylvania Governor Ed Rendell, who, in 2004, awarded the city a $9 million grant, of which $3 million went to Lafayette for improvements along North Third. “Investing in projects such as this that support arts and education is an important part of what it takes to strengthen our economy and improve the quality of life in our state,” Rendell said at the news conference. “This project is going to transform idle properties into a vibrant center of learning and culture that welcomes visitors to Lafayette’s campus. It will put people to work in the process, and, once completed, it will create a new entertainment venue that will draw more people to Easton.”

The transformation of the Case’s property, on the east side of North Third, will create spaces for a scene shop, costume shop, storage area, rehearsal studio, and a theater to screen students’ work and host film events. A 200-seat black box theater will be built along Snyder St. On the west side of North Third, the former Club Mohican will house classrooms, rehearsal studios, and faculty offices.

“This gives us all the things we need to put Lafayette in the top tier of small college theater programs in the country,” said Michael O’Neill, associate professor of English, who has served as the College’s director of theater since 1992. He and Andy Smith, associate professor of English and chair of the film and media studies program, both said interdisciplinary collaboration is a key element in the vision for the project.

“Film and media studies, theater, and studio art all will inhabit the same area. We’re hoping that a lot of creativity that we cannot even predict yet will take place,” O’Neill said.

“We’re delighted at the prospect of constructing dedicated, state-of-the-art facilities so necessary to quality media production and to attracting the best students,” Smith said. “This new arts campus will be shared physical space that enlivens and enables creative and intellectual collaborations among multiple programs and connects this to the community in vital new ways.” 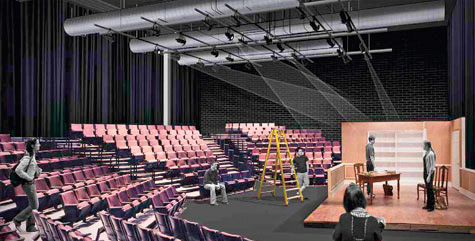 Lafayette’s proximity to major cities also presents opportunities for film and media studies. “We’re interested in creating relationships with artists, filmmakers, and media organizations in New York and Philadelphia. We want this new campus to be a vibrant addition to Lafayette, but also a pathway to other relationships that will benefit the students and community,” Smith said.

The Williams Visual Arts Building, one of the nation’s leading high-tech facilities for art education and gallery exhibitions, not only serves Lafayette students, but offers programs for high school students and local residents.

Last spring, the former Ponulak property, between the Williams Visual Arts Building and Case’s, was transformed into an open-air arts plaza overlooking the Bushkill Creek. This fall, the College demolished the former Hubcap and Wheel Store, eliminating a longtime eyesore along Snyder west of North Third. For now, the site will remain a grassy, park-like area.

Design of the arts campus began this year and is expected to take about 12 months to complete. Construction will begin at the conclusion of the design process and should take about 18 months.

“It’s only a matter of time before the arts campus becomes a hub of creative interaction, where students and local residents can take classes, view films, visit exhibits, and attend shows,” Weiss said. “It’s incredibly exciting.”