Sometimes dramatic performances spur audiences to political or social action. Take, for example, the work of San Francisco Mime Troupe or El Teatro Campesino, in San Juan Bautista, Calif., which began with performances on flatbed trucks to dramatize the cause of farm workers. 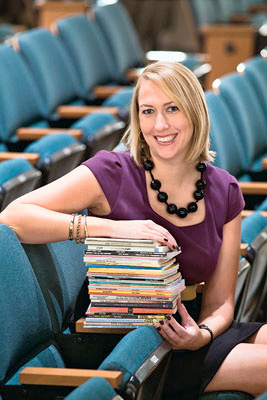 Both companies use theater to highlight social problems and encourage audience participation to solve them, explains Beth Wynstra ’01, who joined the faculty at Babson College this fall as a lecturer in rhetoric.

Wynstra completed her Ph.D. in theater studies at University of California, Santa Barbara, last year. Her dissertation topic was language, persuasion, and action in the modern American political theater. She had the opportunity to be at the heart of the phenomenon she studied. She served as artistic director of Nuestra Voz (“Our Voice”), a writing and performance program that partners Santa Barbara undergraduates with underserved, mainly first-generation, Latino adolescents from the YMCA Teen Center in Isla Vista, near the university.

“In Nuestra Voz, service learning is bi-directional, benefiting all participants,” Wynstra says. The County of Santa Barbara closed the teen center in the spring of 2008, citing structural damage. Amid uncertainty as to whether it would be reopened, Nuestra Voz developed characters and a storyline for a play, Isla Vista: The Video Game, to illuminate the center’s importance to the community and encourage solutions. The company performed it for city council and community leaders.

Wynstra not only sees theater as a vehicle for social change; she views education itself as a social cause. She encourages students to be engaged citizens.

“I want students to leave my classes not only with a knowledge of dramatic theory, theater history, or the rhetorical devices necessary for effective argumentation and oratory but also with an understanding of how such disciplines can work as powerful, transformative agents for social change,” she says. “Citizen-scholarship is at the heart of my pedagogy. I encourage students to think boldly and broadly not only about how literature, theater, and writing intersect with other areas of study across disciplinary boundaries but also how their scholarly work could serve and better their communities, the nation, and the world.”

Wynstra also is a playwright. A reading of her play Always, Gene, about five women who were significant in the life of playwright Eugene O’Neill, was staged in September at the Irish American Heritage Center in Chicago. The play was Wynstra’s Lafayette honors thesis. It debuted at the College in 2001, with a cast that included Wynstra, Liza Zitelli ’02, Rebecca Novia ’02, Kate Edelstein ’01, and Susan Donnelly ’01.

“When I decided to write my thesis on O’Neill, specifically exploring how the women in his life influenced the characters in his plays, my wonderful adviser, Suzanne Westfall, suggested I write a play so that I would not keep the women in O’Neill’s life silent in a research paper,” Wynstra says. Always, Gene also was produced at the 2009 Eugene O’Neill Festival in Danville, Calif.

Wynstra served as a Lafayette Alumni Admissions Representative in Santa Barbara and in San Diego, where she taught high school for four years. “The experience was rewarding and special. It is a great way for alumni of all ages to stay connected with the amazing things happening at Lafayette.