by Barbara Mulligan | photography by Chuck Zovko and Gabriel A. Cooney

During the summer before her first year at Lafayette, Heather Badamo ’03 forged through the incoming class’ common reading assignment, The Odyssey, thinking more about her own journey ahead than about Odysseus’ decade-long trek back to his home in Ithaka. While she didn’t fall in love with Homer’s ancient epic, she was captivated during new student orientation by a much shorter, more modern poem that Prof. Deborah Byrd read. “Ithaka,” by Constantine Petrou Cavafy, begins simply: 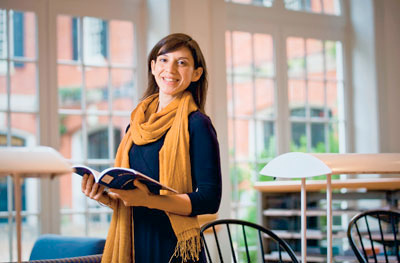 Heather Badamo: “ You learn the most when you don’t expect to.”

As you set out for Ithaka
hope the voyage is a long one,
full of adventure, full of discovery.

“It was a really good introduction to Lafayette,” Badamo says. In the years since, she has been able to link both the epic and the shorter poem to her own life journey.

A double major in art and anthropology & sociology at Lafayette, she is spending the year at Harvard’s Dumbarton Oaks Research Library and Collection in Washington, D.C., on a fellowship, completing work for a Ph.D. in art history from the University of Michigan. Her experience as an EXCEL Scholar working with Ida Sinkevic, associate professor of art, and the honors thesis she wrote under Sinkevic’s guidance influenced her to pursue graduate study. Her research on Medieval Coptic representations of military saints has earned her grants and fellowships that have brought her to Egypt, Syria, and the Metropolitan Museum of Art.

Jacobi Cunningham ’03 confesses that he, too, found Homer long and dense at the time, but has thought about it in the years since and made quite a few connections during his own journey.

“The take-home from that for me is to expect the unexpected,” says the Boston native, who recently joined the life sciences department of Alkermes, a pharmaceutical company in Waltham, Mass., as a post-doctoral fellow.

His path since he began at Lafayette has been circuitous. He switched his major from biology to neuroscience and became fascinated by drug interactions and their influence on disease and illness. In a summer internship at Harvard Medical School, he was exposed to diagnosing and digitally imaging the effects of neurodegenerative diseases. That experience and research he did with Elaine Reynolds, associate professor of biology, helped propel him toward a Ph.D. in pharmacology at Boston University School of Medicine.

His doctoral program included two years of research and study in Toledo, Ohio, before he “came home” to the Boston area this spring to defend his dissertation, which involved the idea of unpredictable stress from MDMA, the drug commonly known as ecstasy. 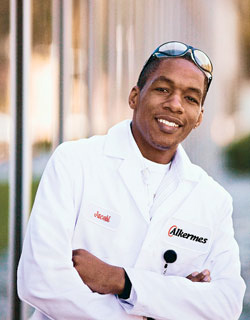 Jacobi Cunningham: “Be prepared to change.”

Laistrygonians and Cyclops,
angry Poseidon—don’t be afraid of them:
you’ll never find things like that on your way
as long as you keep your thoughts raised high,
as long as a rare excitement
stirs your spirit and your body.

Matt Parrott ’03 had read The Odyssey twice before receiving that summer assignment in 1999.

“It was old hat for me,” he laughs. “I skimmed it again before I got to college. It’s a great story.” A government and law major and coeditor of The Marquis literary magazine at Lafayette, Parrott earned a law degree at Fordham and will begin work at the law firm of Cravath, Swaine, and Moore LLP in December.

He says he has carried with him lessons of courage and perseverance he learned from his readings of The Odyssey and from four years on the varsity lacrosse field.

“I had friends and family members and teachers who said, ‘You probably don’t want to be a lawyer. There’s so much menial work that lawyers do.’ I always took their advice seriously, but I learned that it’s the right thing for me,” says Parrott, who wrote an honors thesis examining the relationship between the war on terrorism and civil liberties under the direction of James E. Lennertz, associate professor of government and law. “It takes a lot of patience and a certain kind of personality to really enjoy the law.”

His first year of law school, a “nerve-wracking experience,” called to mind for Parrott the obstacles encountered by Odysseus and his son, Telemachus. “Neither of those men was willing to accept the world as it was,” he says. He learned from early mistakes and maintained his enthusiasm for the law through law school (he made Law Review and placed in the top five percent of his class, graduating in 2008) and two years as a law clerk. This fall, during a stint as an adjunct associate professor at Fordham Law, he’s actively sharing that enthusiasm, including coaching the moot court team.

“I do anything I can to make the law come alive for the students,” he says.

For Ashley Wesmiller Flick ’03, the journey has been well-planned, and she has handled all the challenges with aplomb. A systems engineering consultant with Booz Allen Hamilton, McLean, Va., she brought equal passion to her coursework as an electrical and computer engineering major and her favorite sport, soccer, at Lafayette.

“Soccer was a huge part of my life,” she says. The many practices and games helped her refine her academic goals and focus on her studies, which included research on ways to detect unexploded land mines with Ismail Jouny, Dana Professor of Electrical and Computer Engineering. The focus paid off. The Patriot League named her Scholar-Athlete of the Year in her sport, she graduated summa cum laude, and Lockheed Martin hired her right out of school as a systems engineer in its suburban Philadelphia facility. She completed work for an M.S. degree in systems engineering at the University of Pennsylvania in 2006. 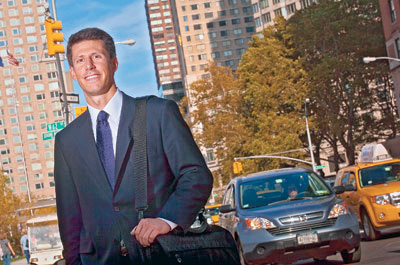 Matt Parrott: “The key is keeping a balance.”

May there be many a summer morning when,
with what pleasure, what joy,
you come into harbors seen for the first time

Flick also studied German at Lafayette. “I was able to be more than just an engineer,” she says, explaining that a semester in Brussels during her sophomore year and the friendships she had with students in many different majors at the College helped broaden her perspective and world view.

In law school, Parrott, too, traveled to Europe with his international moot court team, meeting and competing with law students from all over the world. The experience thrilled him. “You prepare all year and you finally get there,” he says. “It’s your time to shine, to figure out how to put what you’ve learned into practice.”

For Cunningham, new “harbors” were filled with corn, not water, and he did not greet them gladly. Halfway through his dissertation work at Boston University, he moved to the University of Toledo with Bryan Yamamoto, his doctoral thesis adviser, who had taken a new post at the College of Medicine there. “Moving to Ohio was a complete struggle for me,” he says. He felt as far away from his own reality — and his family — as if he were in a foreign country.

Badamo, who studied French, German, and Greek at Lafayette and studied in Greece, Syria, and Egypt, says she ended up feeling at home during her travels — especially during the time she spent in Egypt studying Coptic and Byzantine art, fulfilling these lines from Cavafy: “ . . . and may you visit many Egyptian cities / to gather stores of knowledge from their scholars.”

“I would love to go back there,” she says fervently.

Keep Ithaka always in your mind.
Arriving there is what you are destined for. . . .
Ithaka gave you the marvelous journey.
Without her you would not have set out.

All four graduates say their journeys have been challenging, at times frustrating, and ultimately rewarding. Each describes a different symbolic Ithaka.

For Parrott, Ithaka is not just the honor and respect he will gain from joining a law firm, but the opportunity to craft convincing arguments and reach out to others.

“I think the key to a successful career and life is keeping a balance. While it’s incredibly important to do your homework, you can’t focus on the law completely. Community service is key. I fully intend to do pro bono work,” he says.

For Flick, too, Ithaka means balance: finding success and satisfaction in both her career and her young family, including Jeremy, her husband of three years, and their 11-month-old son, Kellan. She tries to handle challenges as they come and enjoy each moment. Her job involves both technical and business work, and she likes that. “Every day is different. Some days I do testing, some days I do design, some days I’ll help set up a lab. It’s a well-rounded fit for me.” 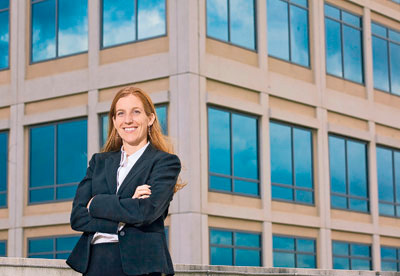 After work, she’s ready for a quick run (there’s no time for soccer anymore) and family time — including her roles as neighborhood block watch captain and frequent baker of cupcakes.

“I don’t know where that came from,” she laughs. “I say it’s my creative outlet.”

For Cunningham, Ithaka is his career researching long-acting therapeutic drugs — and his joyous return to Boston.

“I’m so glad to be back,” he says, pointing out that while Odysseus looked forward to rest in his Ithaka, he’s enjoying the adventure of his cutting-edge research.

“It’s fascinating and challenging,” he says. “There’s no sitting down and relaxing. You always have to be prepared to change and to deal with obstacles.”

Badamo, who first intended to become an archeologist, then came to love art history, says her Ithaka is her current work and the promise of future travels. She’s open to whatever her career and life bring. “You learn the most when you don’t expect to,” she says.