Cradle of American history. Check. Hot spot of the Industrial Revolution. Check. Spawning grounds of cultural and commercial firsts that continue to shape the present. Check. Read history, and it stays on the page: how a Native American village at the confluence of two rivers became the city of Easton as the frontier expanded westward to become the Lehigh Valley, a state, and a nation. Experience the modern technology, interactive exhibits, and unique holdings of downtown Easton’s new Sigal Museum, and the stories spring to life.

“Our goal is to tell the story of American history made in Northampton County,” says Barbara Kowitz, interim executive director of the museum created by the Northampton County Historical and Genealogical Society. 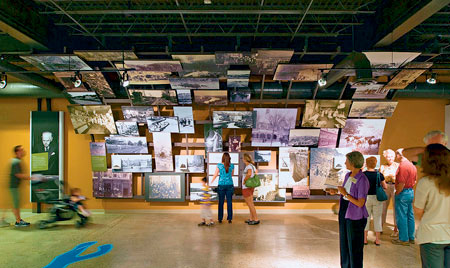 See the word wikewam and think, “Native American house.” See the museum’s realistic wikewam and know how Lenape Indians kept warm and dry. Inside the dome-shaped, bark-covered structure, ears of corn and leaves of tobacco hang from the ceiling. A low platform covered with soft white-tailed deer pelts invites visitors to sit and wait for what might be cooking in the pot suspended above a glowing (simulated) fire.

On nearby museum walls, stone tools and arrowheads collected from the banks of the Delaware are secured behind glass, but a silky, thick beaver pelt is meant to be touched. And the genealogical tree reconstructed from a 100-year-old black walnut hung with metal leaves engraved with names has a bench for sitting under.

The museum opened in mid-August, but its roots stretch back to 1906, when a group of local history enthusiasts founded the Northampton County Historical and Genealogical Society. They met to share their research and interests and started a collection that’s grown to more than 60,000 items today. Before its museum opened, the society had little exhibit space in any of its historic Easton properties, including its former address, the Mixsell House Museum at Fourth and Ferry streets, and the 1753 Bachmann Publick House, which has the last remaining Colonialera court room. Now it has enough space to mount frequently changing exhibits.

“We have a fantastic collection, and it’s so important that people are aware of it and are proud of it,” says Colleen Lavdar, executive director, who took a sixmonth leave of absence in June for family matters.

When the Sigal Building became available in 2003, several doors up from Centre Square’s Crayola Factory, wheels began to turn quickly. The Easton Area Industrial Land Development Co. donated two-thirds of the purchase price with the understanding that the historical society turn it into a museum. Demolition and rebuilding began in 2008.

Much of the 33,000-square-foot, $6-million museum was designed by Spillman Farmer Architects of Bethlehem and features materials produced by the region’s industries. The façade’s slate rain screen is unique, says Kowitz, and there’s lots of cement and steel.

Like an archeological dig, the museum’s location has many layers, some visible, some covered over, and some completely gone.

Listed on a 1752 survey as Town Lot No. 171, the site was “patented” in 1754 to Jacob Meiner. Families named Arndt, Herster, and Mixsell lived there over the next century, and, in 1872, Edward Abel, a carpet retailer, chose the site for his Abel Opera House.

Through the Victorian era and into the age of vaudeville, the venue drew famous stars. After a fire, it re-opened as the Embassy Theater in 1927.

Like its architecture, the museum’s community support is multi-layered, too. Just Born Candy company of Bethlehem sponsored a local industry exhibit in the museum’s lower level, which also contains a large open space suitable for children’s programs. C.F. Martin & Co. of Nazareth, one of the oldest guitar makers in the world, underwrote the museum’s Music Room. In addition to audio features, there are well-used horns and instruments played by Easton’s Pomp’s Cornet Band, disbanded after the Civil War, and rain-stained, hand-written sheet music for marches once played in Easton’s Centre Square.

The Lenape Nation of Pennsylvania, which recently opened a cultural center in the Bachmann Publick House, co-curated several exhibits and presents the Native American perspective in a motion-activated video that greets visitors at the museum’s “Conflict Area.”

“We have hundreds of stories to coordinate with five different levels of maps,” says Andria Zaia, the Sigal Museum’s curator. “Somebody could find their town and find out whether their street was once a stagecoach route.”

The Easton Fire Department loaned a pumper truck. “Through the generosity of these organizations, we’ve been able to create a museum,” adds Zaia. “And none of this could have happened if it were not for Andy Daub,” says Lavdar of the society’s board president who chaired the fundraising.

Like its Lehigh County equivalent, the Sigal Museum is unusual for its size. “These are among some of the largest county historical society museums in the United States,” says Joseph Garrera, executive director of Lehigh Valley Heritage Museum in Allentown, built from the ground up and completed in 2005.

Both museums focus their exhibits on the people of the region. The Lehigh Valley Heritage Museum’s big show on the Pennsylvania Germans opens in November; the Sigal Museum’s second floor, the Decorative Arts Gallery, showcases items made by area inhabitants, including pianos, clothing, textiles, paintings, and grandfather clocks.

Both museums strive to serve their communities with something for everyone and have spaces for public events. Both have genealogical and local history libraries.

The Jane S. Moyer Library & Research Facility, named for its volunteer librarian of more than 70 years, is on the third floor of the Sigal Museum. Titles of its more than 6,000 volumes of local history and family background are now online.

“The Sigal Museum was designed to ‘pop,’” says Lavdar. “We didn’t want a children’s museum, but we wanted to gear it toward children. Nothing pleases me more than to walk into our museum and hear noise.”

Reprinted with permission of The Morning Call. All Rights Reserved.