Seeing Marko Glavic ’04, a Lafayette football all-time great, across the field in a country thousands of miles away from the U.S. helps prove how much of an impact Lafayette has on those who have the good fortune to attend,” says Rob Curley ’10 (above, right), a member of the Carlstad Crusaders of Sweden.

“I have to say it was one of the most surreal things I’ve ever experienced,” says Curley, who was on the losing end of a 17-3 victory by Glavic’s Calanda Bronces of Switzerland in a game played in Chur, Switzerland. 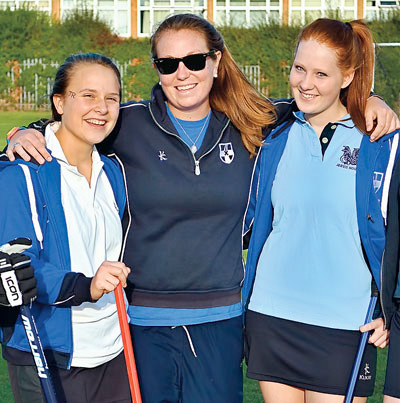 Rob Curley ’10 (photo above) of Carlstad Crusaders competes in a game in Bern, Switzerland. Coach Maddy Booth ’08 (center) with members of her lacrosse team at King’s School Canterbury.

Very rarely do two quarterbacks from the same college face off in a professional football game. Thanks to their openness to unknown challenges, former Leopard quarterbacks Glavic and Curley came face to face in the title game of the European Federation for American Football (EFAF) in June 2010.

They are among a larger group of adventurous young alumni who are continuing their global education and enjoying the opportunity of competing or coaching in professional sports. Other former student-athletes in this group include Meghan Cloonan ’10, Maddy Booth ’08, and Frank Barr ’01.

Glavic has won two European club championships — the so-called “Eurobowl” — during his five years of playing professional football in Austria and Switzerland.

“One thing I learned at Lafayette was time management and how to balance different parts of my life,” says Glavic, an anthropology and sociology graduate.

Those skills also have been essential for former field hockey player Meghan Cloonan, of London, England, who is teaching in the English, history, and biology departments at Epsom College while also writing for various school and alumni publications and coaching field hockey, lacrosse, netball (similar to basketball), rounders (similar to cricket/baseball), and track and field.

“Maintaining the balance between my obligations as a teacher, a coach, and my desire to have the time of my life in one of the world’s greatest cities is difficult,” she says. “But having learned in college to coordinate morning lifts, afternoon practices, and weekend games with an education and social life, I was well prepared to manage my time.”

Cloonan, who graduated with a degree in history and English, also played lacrosse for a while in London. One of her teammates was former Lafayette lacrosse star Maddy Booth.

For the past three years, Booth, an American studies graduate, has helped promote and develop the game of lacrosse in the United Kingdom. She is lacrosse coach and physical education assistant for King’s School Canterbury, a private boarding school, and is working on a master’s degree in international relations at University of Kent, Canterbury.

“Lafayette has proved to be a continuous community that does not end when you graduate,” says Booth, who as a student took a course in Greece and Italy, spent a semester in Australia, and studied Italian in Rome. 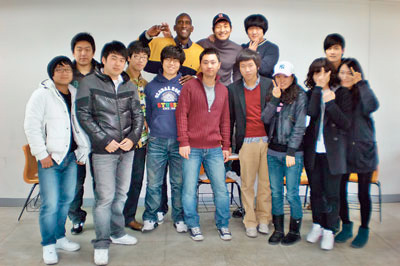 Another student-athlete whose professional basketball career has taken him around the world is Frank Barr. He has played seven years for teams in Dubai, New Zealand, Switzerland, Saudi Arabia, Lebanon, and won a league title in Bahrain.

Barr, who holds a dual degree in American studies and Africana studies, took two years off from basketball to finish his graduate degree in education and worked as a teacher at Woosong University in South Korea. As of September, he was in China to play basketball again.

“My time to play basketball is limited. When my playing career is over, I intend to start my doctorate in education, continue to work with my family’s childcare centers, teach at Church of Christ at Darby, Pa., and open a social studies learning center to assist public school students,” he says. “But since I don’t think I will be able to leave basketball completely alone, I imagine coaching may also be in the mix.”

These former Leopards all speak at least one foreign language — a fact that has helped enrich their experiences abroad.

“The ability to speak the language gives you a different perspective on the culture,” says Curley, a history graduate who speaks enough Swedish to get by, but struggles with German.
“It’s great to communicate with the rest of the population in their language,” adds Glavic, whose fluency in French helped him get a job, assisting with marketing and promotions for a Swiss professional hockey team. He also speaks Spanish and some German.

Although not fluent, Booth gets along with Spanish and Italian. They all urge future Lafayette graduates to take advantage of the College’s resources, including opportunities to study abroad and to network with alumni.

“Lafayette may be a comparatively small school, but I’ve met countless Lafayette grads in my travels,” says Curley. “The Lafayette arm is much more far-reaching than Easton and the surrounding area than I ever imagined.”

Booth added: “I have had many a friend, relative, acquaintance, or stranger say to me, ‘I wish I was doing what you are doing.’ The short answer is, you can.”

“The fact that I was able to play lacrosse and spend time abroad is a testament to the type of well-rounded education that I received at Lafayette.”

And coaching a sport — while unique and special because of the universal appreciation for team activity and sporting culture — is not the only possibility to work or live abroad.

“I recommend taking advantage of any abroad opportunities that arise, whether through a Fulbright, sports, or working in an art gallery,” says Booth, who loves experiencing the buzz around London with the preparation for the 2012 Olympics. “The things that you learn about life and yourself though experiences abroad cannot be duplicated.”

Barr, who has lived in seven different countries says: “I’ve learned that words, at times, are overrated and overused. Moreover, there are certain universal traits such as cordiality, compassion, humility, and respect, which speak louder than well-enunciated words.”

While Cloonan agrees that studying abroad is important, she says it is somewhat restricted and urges students to find a way to live in a country out of the United States to truly become immersed in another culture.

“On study-abroad trips, students often spend the majority of six months crossing nightclubs and landmarks off their international ‘to-do’ list with a similar group of undergrads from the same type of educational back-ground, if not the same actual university,” she says.

“Teaching is one way to obtain a work visa for countries all over the world,” says Cloonan, “and even though I don’t plan to make teaching a career, I have found the experience unbelievably fulfilling and valuable.” She mentioned British Universities North America Club through which recent American graduates can organize reciprocal work agreements with young people from Britain, Ireland, Australia, and other commonwealth countries.

Curley says Lafayette prepared him to deal with the world after college and outside the U.S. “It was truly the entire package of learning how to communicate — a skill I believe is the most transferable, whether it is speaking to a teammate in another language or in a sales position in the United States. It was also about the right way to treat people.”

“Lafayette gave me the tools to be successful,” he adds. “It was up to me how I chose to use them.”