While contemplating a Lafayette student’s request to rate his radical reforms, Mikhail Gorbachev leaned on the lectern in Kirby Sports Center arena. The Soviet Union’s last president could have reviewed how he helped bring free speech to his fellow Russians, or helped unify Germany by demolishing the Berlin Wall, or helped end the Cold War by signing a nuclear-disarmament treaty with the United States. Instead, he delivered a witty evasion reminiscent of the late U.S. President Ronald Reagan, his former foe and friend. 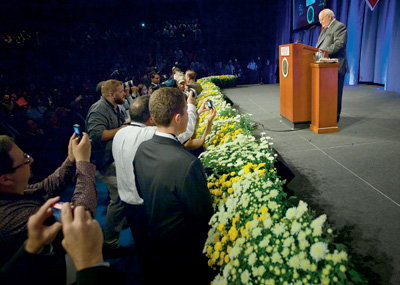 Mikhail Gorbachev gave the inaugural lecture for the Oechsle Center for Global Education before a capacity crowd of 3,600 in the Kirby Sports Center.

“If we answer this question,” he said through a translator, “what will remain for the university to study?”

The packed arena echoed with laughter at a savvy 80-year-old statesman dodging a tricky question and a trickier answer. Yet his statement had a measure of truth for Jacqueline Olich ’92, who considers Gorbachev one of her academic ambassadors. It was his human-rights “experiment” in the late 1980s that led her to study Russian, which led her to study twice in the Soviet Union, which led to her career as professor and associate director of the Center for Slavic, Eurasian, and East European Studies, University of North Carolina-Chapel Hill. Gorbachev’s visit to Lafayette was so important to her, she flew that day from North Carolina to Easton for a close encounter with one of her humanitarian heroes.

Gorbachev exemplifies the visionary, transformative leadership which we hope the Oechsle Center for Global Education will inspire – and prepare – our students to emulate as they engage with the world.” -President Daniel H. Weiss

Gorbachev’s Oct. 19 speech was the inaugural lecture for and celebration of the College’s planned Oechsle Center for Global Education. The new building will include faculty offices, seminar rooms, and state-of-the-art classrooms with international connectivity, with space for public lectures and common areas to encourage dialogue about global issues. Building on the College’s historic strengths, a significantly revised major in international affairs will be the core of the global education program. The curriculum also will include study-abroad courses, a capstone experience, community-based learning, and area studies programs.

In addition, Gorbachev’s visit marked Lafayette’s historic 1988-1991 participation as one of the first six U.S. colleges and universities selected for an exchange program with schools in the U.S.S.R. Endorsed by both Gorbachev and Reagan, the program allowed students like Olich to experience Gorbachev-sponsored freedoms of worship, election, and capitalism. The other U.S. schools involved were Harvard, Yale, Stanford, Williams, and University of Maine.

An overflow crowd of more than 3,600 came to hear a rare combination of revolutionary, entertainer, and icon. Gorbachev was the first Lafayette guest to have received the Nobel Peace Prize, win a Grammy Award for a children’s recording (with Bill Clinton and Sophia Loren no less), and have his face printed on acid-laced blotter sheets. He was also the first world leader to have his face posted on the scoreboard of Fisher Stadium. 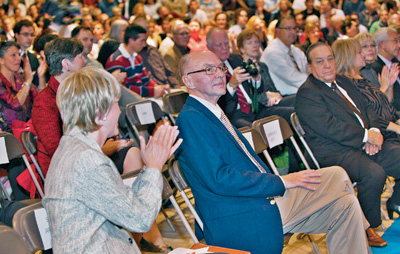 Walter Oechsle ’57, founder of Oechsle International Advisors, and his wife, Christa, provided the support for the creation of the new center for global education. Seated to his right is Sandra Jarva Weiss, partner with Tallman, Hudders & Sorrentino, wife of President Daniel H. Weiss.

In welcoming Gorbachev, President Daniel H. Weiss said, “For his leadership in ending the Cold War and advancing the cause of freedom throughout the Soviet Union and around the globe, and for his steadfast commitment to fundamental human rights, Mikhail Gorbachev has earned the gratitude of the world and the respect of all who value wise, principled, and courageous leadership.”

Several audience members were directly affected by Gorbachev’s reforms. Angelika von Wahl, associate professor of international affairs, attended the Nov. 9, 1989, opening of the Berlin Wall, which allowed residents of East Germany to freely visit residents of West Germany, where she grew up and where she studied. She also studied at Duke University in North Carolina. She discusses her role as an eyewitness to history in her first-year seminar “Overcoming the Wall.” One of her students is Karina Goodman ’15, whose father helped negotiate Germany’s unification as an official for the U.S. Department of State.

Gorbachev’s visit, which coincides with the 20th anniversary of the dissolution of the Soviet Union later this year, was particularly personal for Julia Brodsky ’13, whose parents hail from Belarus, a former Soviet republic in Eastern Europe. Without Gorbachev’s reforms, she insists, her parents probably would not have settled in the U.S., where she was born in 1991, the year Belarus declared its independence from the U.S.S.R.

“I probably wouldn’t be here if it weren’t for Gorbachev,” said Brodsky, a psychology major and Russian minor. “My parents joked that I should thank him by bringing him flowers.”

Gorbachev started his speech with a symbolic olive branch. He recalled a near catastrophe when geese migrating from the Soviet Union to North America were nearly misidentified as strategic missiles. It was a sobering reminder to Soviet and American leaders to end the threat of nuclear war, for the sake of all species. “Whether or not we argue or get along well,” he said, “these geese are still devoted and committed to our countries.”

The statement typically reflects concerns held by Gorbachev, who founded a think tank for Nobel Peace Prize laureates. His earthy earnestness pleases Oksana Tereshchenko, a volunteer with Lafayette’s Russian and East European Studies program. A native of the Russian city of Volgograd, she believes that Gorbachev’s reforms allowed her to read foreign newspapers without fear of being punished and travel abroad without fear of being unable to return to her homeland. Today, she lives with her American husband in Phillipsburg, N.J., and tutors undergraduates about everything from the Battle of Stalingrad to environmental crises. 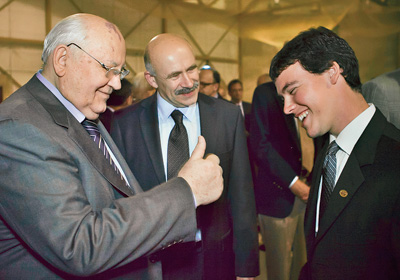 In his lecture Gorbachev recalled that his first nuclear-disarmament summit with Reagan was anything but harmonious. He initially dismissed the American president as an ideological “dinosaur.” A few days later Reagan dismissed his Soviet counterpart as “a diehard Bolshevik.” The superpower leaders overcame these unpleasantries, which Gorbachev jokingly called “pleasantries,” to sign a 1987 treaty that banned their nations’ short- and intermediate-range nuclear missiles. They also became good friends; in 2009, Gorbachev honored Reagan by visiting Eureka College, Reagan’s alma mater.

These back-room machinations fascinated Nicholas DeRosa ’12, a conservative Republican fascinated by Reagan, a role model for conservative Republicans. The government & law/international affairs major was also impressed by Gorbachev’s impressive credentials. In 2011, Gorbachev presented one of his first “Man Who Changed the World” awards to Kenyan engineer Evans Wadongo, who invented a solar-powered lantern. His 80th-birthday gala featured the Scorpions, a German rock band, performing “Wind of Change,” their German-unification anthem.

Gorbachev is “definitely a well-rounded world leader,” said DeRosa. “Most politicians need to be that way.”

Most politicians lack Gorbachev’s courage of conviction. During his speech he attacked America’s “sick” military industrial complex. “Our American friends are exceedingly concerned about their security and trust no one,” he said. “That is not a good thing.” American commanders, he added, also suffer from an arrogance complex. “We are used to America giving advice to everyone,” he said. “America is pushing one model like instant coffee to all countries.”

As we are addressing these challenges, the problems raised by these protest movements, we will gradually find our way toward a new world order.” – Mikhail Gorbachev

Gorbachev saved his harshest criticism for his Soviet rivals. Russia’s economy has been “ruined” by the “shock-therapy” tactics of the late Boris Yeltsin, the first president of the Russian Federation. The country’s political instability has been aggravated by Prime Minister Vladimir Putin’s refusal to respect the independence of Russia’s independent states.

Potent opinions like these have made Gorbachev unpopular among Communist hardliners, said Rado Pribic, Williams Professor of Foreign Languages and Literatures and co-chair of international affairs. According to Pribic, Gorbachev’s Russian enemies blame him for introducing the freedoms of speech and election that led republics to declare their independence, which led to the breakup of the Soviet Union. Some critics remain angry at Gorbachev’s late ’80s campaign to reduce rampant alcoholism by lowering the supply and raising the price of liquor, which led to a boom in black-market distillery, which led to a dramatic shortage of sugar.

“Many Russians are not happy with Gorby because he gave away the empire,” said Pribic, a coordinator of Lafayette’s 1988-1991 Soviet exchange program. “He was too much of an idealist; he wasn’t enough of a pragmatist to defend his own turf. Put it this way: not too many people celebrated his 80th birthday in Russia.” 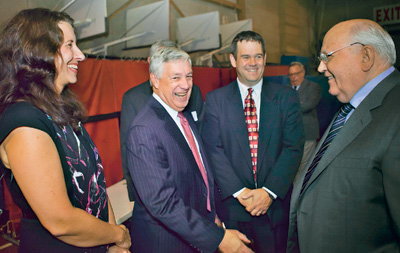 Gorbachev ended his lecture by turning a speech into a commencement address. He advised students to marry well, for love rather than “cold calculation.” His marriage to fellow student Raisa Maximovna lasted 46 years, during which he supported her campaign to improve blood-cancer treatments for youngsters. Gorbachev’s tribute to his late wife touched Olich, who called the couple’s marriage “a strikingly fresh and modern partnership, particularly for a Soviet leader.”

Gorbachev then answered five questions relayed by Weiss and translated by Pavel Palazhchenko, his interpreter for 27 years and author of three Russian-English dictionaries. One student essentially asked if Russia was better or worse off not being in the Soviet Union. Gorbachev pointed to a poll conducted by his foundation that revealed that while 80 percent of Russians regret the dissolution of the U.S.S.R., only 9 percent want to restore it.

By the final question Gorbachev was relaxed enough to lean his elbow on the lectern, a classic debating pose. He debated himself while analyzing last spring’s people’s revolutions in Egypt and Libya. There is no need to “panic,” he said, that tyranny will be replaced by democratic anarchy. After all, didn’t banks bailed out by governments pay huge bonuses to their chief executives? “Was there a crisis,” he added, “for those people?”

After filing his final answer, Gorbachev left the stage to his third standing ovation. Olich didn’t mind that she never got to ask him what children’s books he read, information she could use in her graduate seminar in 20th-century childhoods in the U.S. and U.S.S.R. She received something better: a happy reunion with her Lafayette mentors, an inspiring speech, and a photograph with Gorbachev, the statesman who started her scholarly sojourn. “All that time I spent with my little Russian-lang index-flash cards @LafCol,” she Tweeted a college roommate, “was worth it.”

Enhancing Global Reach across the Curriculum

The New Face of Global Education

In opening remarks at the first faculty meeting of the 2011-12 academic year, Provost Wendy Hill focused on global education. She provided a historical…