A prototype of a portable light that would be powered by water current is tested by Thomas Benjamin ’12 (right) and Elliott Mitchell-Colgan ’12. Their goal is to develop small hydroelectric power systems for use during storm-related power outages.

Imagine being a study-abroad student when a 6.3 earthquake strikes your host country. No family or friends. Unfamiliar surroundings. Emergency relocations. Starting new classes late. That was the situation in Christchurch, New Zealand, last February in which Emily Melvin ’12, a geology and American studies double major, found herself. 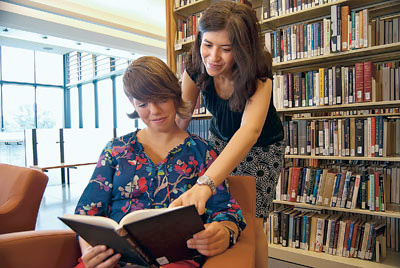 Emily Melvin ’12 (left) is designing a natural disaster response plan for study-abroad directors that will provide guidance in assisting students during an emergency situation. Her faculty mentor is Rebecca Kissane (right), assistant professor of anthropology and sociology.

Relocated to a new university outside the city, Melvin had to adjust to new classes and living off campus. Others in her group returned home, unable to cope with the chaos.

“Everyone in my study-abroad group dealt with the earthquake differently,” says Melvin, of Seaford, N.Y. “Some students returned to America, most struggled to adjust, and some appeared to be unaffected. These different reactions made me think it would be interesting to examine how study-abroad students respond to natural disasters.”

Enter the Grand Challenges Scholars Program. In 2008, the National Academy of Engineering (NAE) identified 14 grand challenges for engineering in the 21st century. Shortly after, the schools of engineering at Duke University, Olin College, and University of Southern California proposed the Grand Challenges Scholars Program as a new educational model to blend curricular and extracurricular components to prepare students to be a generation of problem solvers.

Just as the NAE endorsed the program, Lafayette received a gift from a parent, Sonny Whelen, father of James Whelen ’10, to promote the integration of liberal arts and engineering. Sharon Jones, then professor and director of engineering, capitalized on the serendipitous timing and took the program one step further than Duke, Olin, and USC. Lafayette’s program wouldn’t only be about engineering — students would approach the challenges from engineering as well as liberal arts angles. 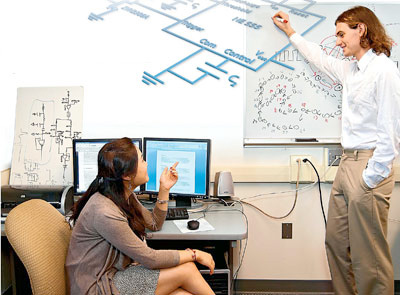 Yue (Luna) Yuan ’12 (left) and Felix Hutchison ’12 designed an artificial neuron — a portion of their full circuit schematic shown here — that mimics a key feature of the brain.

“In the context of the Grand Challenges, which include such things as providing clean water, restoring and improving urban infrastructure, and preventing nuclear terror, it is plain that technical solutions are a necessary but not sufficient condition for solving them,” explains Helena Silverstein, professor of government and law and chair of Lafayette’s Grand Challenges steering committee. “For example, engineering an innovative method for cleaning water does not, by itself, ensure that clean water will be deliverable in an environment where economic, political, or social barriers may inhibit the deployment of that method.”

Yue (Luna) Yuan ’12, a mechanical engineering and policy studies double major from Wuhan, China, and Felix Hutchison ’12, an electrical & computer engineering and mathematics double major from Plainsboro, N.J., immediately recognized that their project stretched beyond engineering’s boundaries. Together, they’re simulating artificial neurons by building electrical circuits in computer software. Their project — brain computer interface — is a direct communication pathway between the brain and an external device. It could have groundbreaking medical implications for victims of brain damage and disease.

“Our project will contribute to the electronic device that can communicate with neurons, the electrically active cells in the brain and nervous system,” says Yuan. “This technology would allow one to control electronic devices using only cognitive strength, an incredible boon to victims of paralysis. Also, if we can accurately simulate neurons and build the artificial neurons at a small enough scale to replace damaged neuron networks inside the brain, we can potentially bring huge benefits to patients suffering from diseases such as Alzheimer’s.”

The combination of technology and medicine always includes a murky gray area, which is where Yuan’s policy studies background comes into play. Because their small-scale model does not yet have direct applications, ethics aren’t an immediate concern, but the team must take them into account as the project grows. Grand Challenges is the perfect training ground for Yuan, who plans to pursue a master’s degree in technology and policy.

Unlike Lafayette’s other undergraduate research opportunities, such as the EXCEL Scholars program in which students assist faculty members with their ongoing research, Grand Challenges places students firmly in the driver’s seat to design and execute their own projects. Each team receives a summer research stipend up to $3,000 per student, a budget of up to $3,000 for project expenses, and summer housing after the junior year. They also receive up to $1,000 to participate in the Grand Challenges Scholars Program national summit during their senior year as they continue their research as honors theses or senior projects. 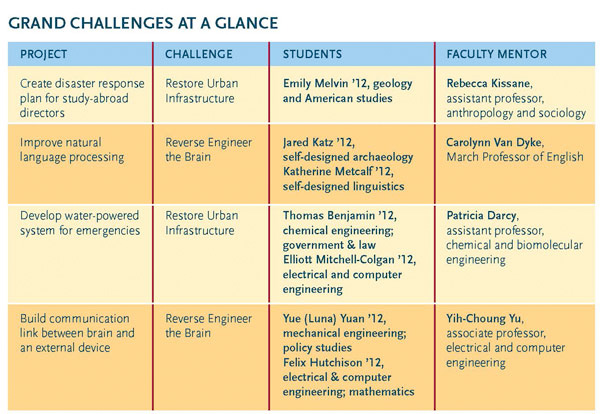 The project itself is only one part of the Grand Challenges equation at Lafayette. In order to qualify, participants must meet rigorous academic standards with an interdisciplinary portfolio demonstrating experience with a variety of coursework and extracurricular experiences that may include study abroad, an international or cross-cultural internship or research, a three-course cluster in a cross-cultural area, or an international or cross-cultural experience. For the interdisciplinary curriculum, engineering and natural science majors must take at least two courses outside of those disciplines, and humanities and social science majors must take two courses that address technical dimensions.

For instance, Melvin’s semester abroad changed her project’s trajectory. Originally, she wanted to explore the human element of rebuilding after natural disaster, something she says was lacking in the NAE’s challenge to “restore urban infrastructure.” After the earthquake, she narrowed her focus to develop a plan for study-abroad directors to provide more support to students affected by future natural disasters, a necessity given that study abroad is increasingly popular in a much more connected world.

Jared Katz ’12, of Stoneham, Mass., who designed his own major in archaeology, worked as a member of Proyecto San Bartolo, a dig that encompassed the pre-classic Mayan site San Bartolo dating to around 800 B.C. and the classic Mayan site Xultan dating to 200 C.E., both located in Guatemala. The digs are crucial experience in his challenge to “reverse engineer the brain.” Together with Katherine Metcalf ’12, of Springfield, Va., who designed her own major in linguistics, he is attempting to improve current natural language processing (NLP) programs by looking for universal aspects of metaphor that can be coded to create more advanced programming. The disciplinary divide is a major hurdle in their challenge. 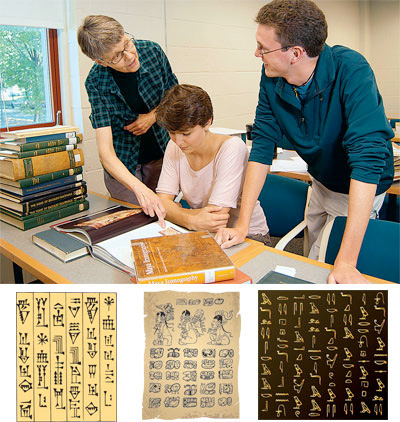 Katz and Metcalf’s project falls under the same category as Yuan and Hutchison’s challenge, showing just how diverse and creative Grand Challenges allows students to be. While Yuan and Hutchison are coming from a decidedly more technical angle, they’re keeping policy and ethical issues in mind. Katz and Metcalf are taking a more humanities-based angle within their goal of creating better technology.

“Metaphor is present in all parts of human language, as it’s used anytime something abstract is being talked about,” explains Metcalf. “Current programs rely on lists of known and established metaphors.” To enable programs to decipher both literal and figurative language, they are studying ancient Mayan, Egyptian, and Sumerian languages to discover patterns used to create and comprehend metaphor. “For example, when people talk in reference to time, they are speaking metaphorically. So, it’s important to understand metaphor if one wants to understand half of human language. One of the most common uses for NLP programs is language translation. The more efficient translation devices become, the easier it will be for people to communicate and collaborate on a cross-cultural, cross-national scale.”

The global scope of Grand Challenges is not lost on any of the student research teams. In fact, it’s one of the program’s most appealing qualities. They know that their work won’t just impact one community but instead may impact communities and people from all walks of life in all parts of the world.

Thomas Benjamin ’12, a double major in chemical engineering and government & law of Norristown, Pa., and Elliott Mitchell-Colgan ’12, an electrical and computer engineering major from Henderson, Nev., set out to develop a waterpower system for emergency use. Floods and water damage wreak havoc in bustling American cities like New Orleans as well as remote rural villages in third-world countries. Like Melvin, they are working on the NAE challenge to “restore urban infrastructure.”

“Water is the world’s most abundant resource, and in some areas of the world, the scarcest and most sought after,” says Benjamin. “In our time, electric power is considered a vital part of shelter, a basic human need. Providing electric power to very remote areas by using the world’s natural, renewable resources is a humanitarian goal that transcends nations.”

While Benjamin is a “practical, hands-on kind of guy,” Mitchell-Colgan considers himself the more theoretical partner. The pair is creating a lightweight (only 22 pounds), portable hydropower system to enable rescue teams to continue work in situations where the lack of electricity would make their work impossible.

“Imagine the power going out during a flood when a rescue team needed to find someone being carried away by the current in the night,” says Mitchell-Colgan, who, like Melvin, was a member of a Tech Clinic team that created an electric golf cart. “If there is no other source of power, there will be no light, and most probably no rescue. If there is a floodlight, the chances increase reasonably. We’re trying to mitigate the drastic changes that come from power outages in normal conditions, or during storms or floods when power is needed most.”

Silverstein points out that Lafayette’s approach to the Grand Challenges fits nicely with a goal in the College’s strategic plan: “to strengthen the integration of the engineering division’s offerings into the educational experience of non-engineering students and of liberal arts programming into the experience of engineering majors.” It’s an uncommon approach to these as-yet unsolved problems, but one that without which none of these scholars could imagine accomplishing their goals.

Maybe overcoming disciplinary boundaries is the grandest challenge of them all.