The French government has honored Morris Metz ’50 for his personal contribution to the liberation of France during World War II. On Oct. 13, he was named a “chevalier” of the National Order of the Legion of Honor (Ordre national de la Légion d’honneur). 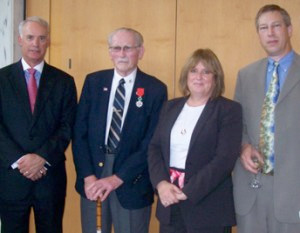 Established in 1802 by Napoleon Bonaparte, First Consul of the First Republic, the order is the highest decoration in France.

Metz was previously honored by the French government in 2002 with a French letter of commendation during the country’s “Thank you America” campaign to recognize veterans who served in France in 1944 and 1945.

“We’ve been called the greatest generation,” says Metz. “In my opinion, our memorial is a legacy — we did a job that had to be done, and came home and raised our families, and didn’t talk about it.”

Metz and his unit — 3rd Battalion, 301st Infantry Regiment, 94th Infantry Division — received a Presidential Unit Citation in 1998 for their role in winning the Battle of the Bulge.

A psychology graduate, Metz enrolled at Lafayette after the war. He is retired director of quality control, Mack Printing Co., Easton, Pa.