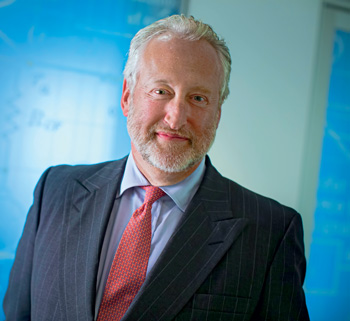 Tom Loughlin ’83 doesn’t see engineers as clipboard-toting white coats in laboratories. Instead, the executive director of the American Society of Mechanical Engineering believes engineers should be technological citizens focused on human needs. The big challenges of the next century—providing access to clean water, securing cyberspace, and finding clean, renewable energy—as well as small ones, will be tackled by engineers.

“Engineers at their root are problem-solvers,” he says. Need a brighter light, a better kitchen faucet, or a faster car? Turns out, guys related to Loughlin have been helping for the past century and a half.

His father, Robert Loughlin ’53, and grandfather, Julius Naab ’19, were both Lafayette engineers. That means there’s been at least one member of the Loughlin family tree providing answers to humanity’s problems since men were hunkering down in trenches across Europe during World War I.

The current Loughlin iteration, a Lafayette mechanical engineering graduate who has headed ASME since 2008, created the patents for five different lock-and-key systems and has been published numerous times.

In celebration of Lafayette’s 150th anniversary of engineering this year, he sat down with us to talk shop.

Rated as one of the Best Undergraduate Engineering Programs by U.S. News & World Report, engineering at Lafayette not only provides an outstanding technical education, but also prepares students with the ability to think creatively, imagine broadly, communicate effectively, and influence change.

Give me your one sentence pitch to an 18-year-old considering engineering.

The only way 7 billion inhabitants of our planet can enjoy life with a safe, reliable food supply; clean water and sanitation; ubiquitous energy; housing; and steady economic stability and growth is through engineering. It is a pretty compelling story.

How will this pitch attract more minorities and women to engineering?

There are many, but I would say safe, abundant, reliable, renewable, cheap energy is the biggest engineering challenge. Through achieving the above, we can address other human challenges
facing humankind ranging from water to food supply to education and economic development.

Did you think it will be solved in our lifetime?

Yes, and probably sooner than later. For example, the advancement of electric vehicles essentially creates an almost unlimited energy storage infrastructure that greatly enhances our ability to access renewable energy sources. For example, solar energy generated in Arizona or wind power from South Dakota can show up in the national grid with the increased capacitance associated with the new batteries. Think of the increased capacity for energy storage in the same way that you think of reservoirs for water storage.

Is multidisciplinary engineering a new concept?

How do the liberal arts benefit engineers?

Solutions need to be appropriate to the community in which they are being offered. For example, when you’re offering a cook stove solution as a clean alternative to charcoal fires within homes in Africa, you need to consider that there may be cultural, economic, and social reasons people are cooking in their homes. So where one solution might be, well we can build this great stove outside if they work in a central space. You have to understand that community doesn’t behave that way. The cultural norm for the community is to cook indoors, and so you need to have appropriate solutions for the communities in which you are serving. I think that a school like Lafayette that is cutting edge both in terms of its liberal arts and engineering education, understands the right kind of solution that makes sense and the world in which we live. You need to not only understand engineering but the anthropological and other aspects of the solution.

How did your liberal arts education benefit your engineering career?

I’m a third-generation engineer at Lafayette. My father went to Lafayette; one of the reasons was because of the understanding and the appreciation of the liberal arts education alongside of engineering. So that you have the privilege and access to learn and understand about the areas of the arts outside engineering. As an undergraduate at Lafayette, I took art history; I took studio art classes; I took other liberal arts courses. I think that made me a more rounded person and a better leader because I understand how the disciplines interact and all operate within a balance.

It brought you access to a fantastic curriculum, resources, and people—a community of folks. Professors, students, and so forth. It’s really a microcosm for the greater world in which we live.
So, I’m an engineer in a world full of people with diverse interests. I can communicate and interact more effectively if I understand how the economist thinks or how the historian thinks or the anthropologist or artist. And that’s really fun and interesting, and that’s what makes the world go round. It also helps problem-solve because you can bring different perspectives to the table.

How has engineering changed since you graduated from Lafayette?

When I was there we did a lot of machine shop work and just a little bit of computing. I had a programmable calculator, but we didn’t have computers. Programming was done in a center
using FORTRAN. The idea of computing and personal computing has completely transformed engineering and engineering education.

Engineers are problem-solvers. They want to make things better. If you think back to the roots of engineering, it’s always been about improving the quality of life. The Archimedes screw is an engineering device. It efficiently moved copius amounts of water 1,000 years ago. I’m speaking to you in New York where we have one of the most complex infrastructures in the world, really. We have millions of people living in a confined space with clean and reliable water, energy, food, and transportation. We get back and forth to work daily in a reliable and safe manner. That’s all rooted in engineering. As the world gets more complicated and moves at a greater velocity and is dealing with big challenges such as climate change and ensuring reliable and food security, the role of engineering will become more important than ever.

What differences do you see in the newest generation of engineers?

My generation of engineers were introverts and not terribly well-adjusted socially. I’m recovering from that, and I think my peers are too. We were more things oriented. That is we kind of like to withdraw into providing solutions and talking to nerds like ourselves in terms of how we can do things.

We waited to be called upon to solve a problem.

I see engineers now and particularly Lafayette engineering students leaning in with clear eyes and saying, “I’m here to solve a problem, I can create durable energy solutions for humankind. I can provide safe drinking water. I can provide sanitation. I can do this.” It’s that “can do” spirit and optimism that’s reflected in Lafayette engineers and is going to make the world a better safer place. It gets to this idea that engineering is much more of a people skill today than it was perceived a generation ago.

What long-term advantages do you see these enhanced skill sets affording this new generation of engineers?

I’m very eager to see the result and the impact of the leaders who are coming through the new curriculum and entering the workforce and where they end up. Not just where they end up after they graduate but where they end up 15-20 years from now. Hopefully they’ll be in Congress. They’ll be sitting at the head of board tables. They have high integrity and understand the complexity of the world we live in. They’ll be helping shape the conversation so that we can get beyond the political and empty rhetoric of today and get on to making the world a better and safer place.

What is the focus of ASME?

The American Society of Mechanical Engineers promotes the art, science, and practice of multidisciplinary engineering and allied sciences around the globe. Our focus is on technology
and how it can be a servant to humankind to ensure public safety.

What’s the future of engineering?

There are two concepts that are really important right now. One is practical singularity, which is when the processing power of computers and human interaction become one, and we can no longer tell the difference between the two. My interpretation of this is there’s going to be a practical integration of engineering, and we’re seeing it now in how we interact with our phones, our automobiles, and in the seamless immersion of technology in our day-to-day lives.

The next concept is practical alchemy. 3-D printing has been around for about 20 years, but what’s happening now is we’re taking printing to a whole new level. In the next step you’ll be able to make almost anything you can conceive of. If you want a diamond ring, you can make a diamond ring. We’re at a point where we’re actually making soft tissue; we’re making food.

So how does that translate into decisions we have to make for humankind?

If we’re in a period of singularity and alchemy, material things no longer have value because we’ll be able to make anything we want. The final step is how this converges back to improving the quality of life. There are 7 billion people on the planet; there are finite resources. We have to figure it out, and it’s our job as engineers and citizens to be part of the conversation.