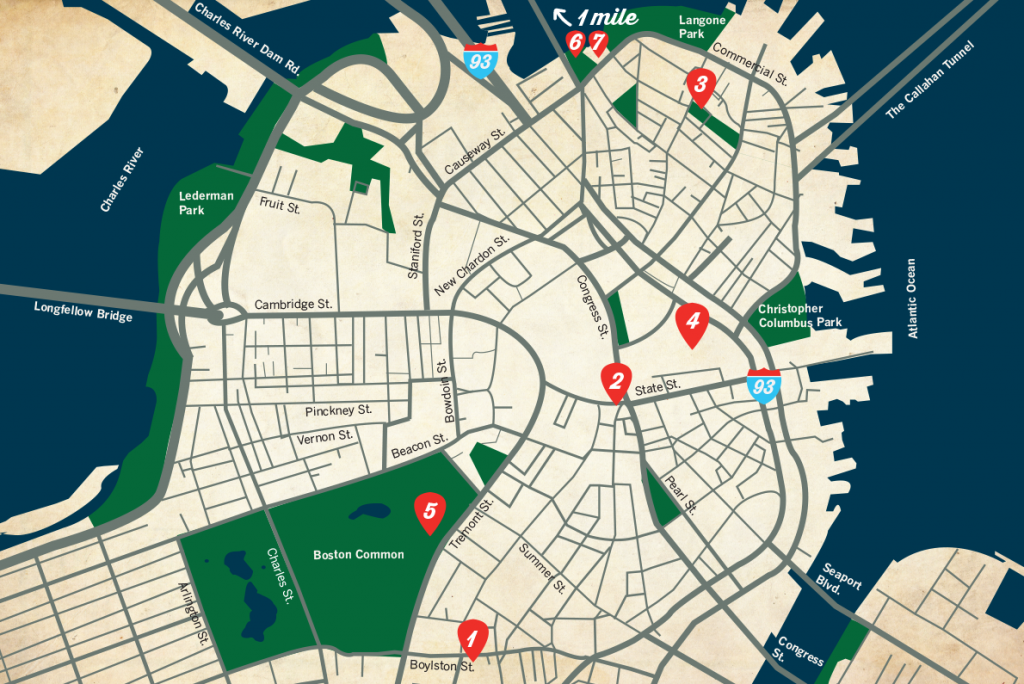 The Tree of Liberty was more like the botanical equivalent of a Facebook group than an ordinary elm when it stood proud on the corner of Essex and Washington streets. For many years, the tree served as an unofficial meeting place and communications center for rebellious Bostonians. The tree also was used to hang effigies of men who supported the detested Stamp Tax and served as the starting line to the tar and feathering of a few Loyalists. It’s no wonder then when the British laid siege to the city in 1775 one of the first things they did was join with Loyalists to chop it down. That didn’t stop the Marquis from paying homage to the stump in 1824. “The world should never forget the spot where once stood Liberty Tree, so famous in your annals,” he declared.

The stump is long gone, but a tablet embedded in the wall of the office and apartment building at 630 Washington St. bearing the inscription “Sons of Liberty 1766; Independence of  Their Country 1776” marks the historic site. 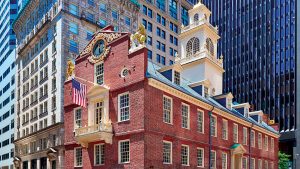 The Marquis “reviewed” the Massachusetts militia in front of the Old State House, now the oldest surviving public building in Boston, and then headed to lunch for 1,600 under a large marquee. The building is now a history museum, but there’s nothing stuffy about the artifacts on display. Check out a surviving vial of tea from the Boston Tea Party (consume with eyes only), John Hancock’s red velvet frock, and part of a flag that flew above the Tree of Liberty. 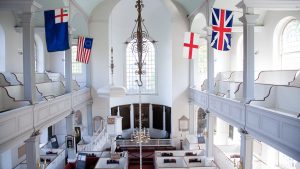 Remember “One if by land, and two if by sea” from Henry Wadsworth Longfellow’s poem immortalizing Paul Revere’s ride? This is where the lanterns hung that night, ablaze in the belfry-arch of the church tower to signal the British were coming by sea. When the Marquis arrived on Aug. 27, 1824, he was less enamored with the historic steeple than a marble bust of his old friend George Washington, dead then for 25 years. “Yes, that is the man I knew!” he exclaimed. “And the best likeness of him I have ever seen.” 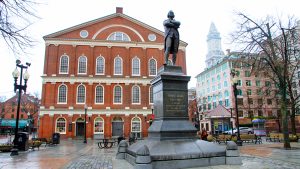 The hall’s second-floor assembly room was a popular gathering spot for colonial patriots who advocated liberty from Great Britain. After the Revolutionary War ended, Faneuil Hall continued to be at the center of patriotic celebrations.

When the Marquis visited in 1824, he headed to the top floor to view the Ancient and Honorable Artillery Company’s collection of swords, uniforms, firearms, and other memorabilia. The artillery company is the oldest chartered military company in North America.

Designed by sculptor John Francis Paramino, this simple memorial was installed Aug. 24, 1924, to commemorate the 100th anniversary of Lafayette’s return to Boston. It’s located in Boston Common along a footpath Lafayette traversed during a procession in his honor. Bostonians couldn’t get enough of the Marquis, and more than 60,000 of them, including schoolchildren wearing ribbons printed with his visage, lined the streets that day. The path is now called Lafayette Mall. 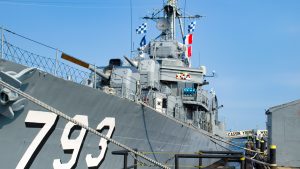 What’s a tour of Boston without a trip to what was then known as Charlestown Navy Yard, one of six yards originally created to support the fledgling United States Navy?  Lafayette, who knew his way around ships as well as any salty sailor, toured the 30-acre property on Aug. 27, 1824.  The facility stayed open for another 150 years before it was officially closed and transferred to the National Park Service. Now part of Boston National Historical Park, it’s open to visitors year-round. 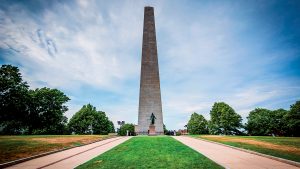 The Battle of Bunker Hill on June 17, 1775, was the first major battle of the Revolutionary War and the one where colonial Col. William Prescott uttered, “Don’t fire until you see the whites of their eyes.”  Technically a British victory, Bunker Hill proved colonial forces could hold their own against the redcoats. On the 50th anniversary of the battle in 1825, Lafayette laid the cornerstone of the monument with the help of some masons. The ceremony featured a 2-mile procession from Boston Common with the 40 survivors of the battle following in eight carriages and a rousing speech by Daniel Webster. Dinner for 4,000 was then served.