A dad, a daughter, and a dorm room fluke.

“‘Are you serious?’” Grace recalls saying in response to the collegiate convergence of time and space. “I was horrified for a second.”

For Jay, memories of living in South College 30 years ago came flooding back.

He talked about how he and his roommate built a loft in their room (which was allowed in those days), and how they created an open floor plan that became a popular destination for fellow students.

“The ceilings in this historic hall are 13 feet high, so we had plenty of space to build the loft,” Jay recalls. “It was a great place to come and hang out.”

“It was overwhelming walking through the hallways again—such fond memories from my freshman and sophomore years. I remembered the view of Kirby Hall (of Civil Rights) from the window,” he says.

His daughter’s reaction at sharing her father’s old room was not nearly as ebullient. 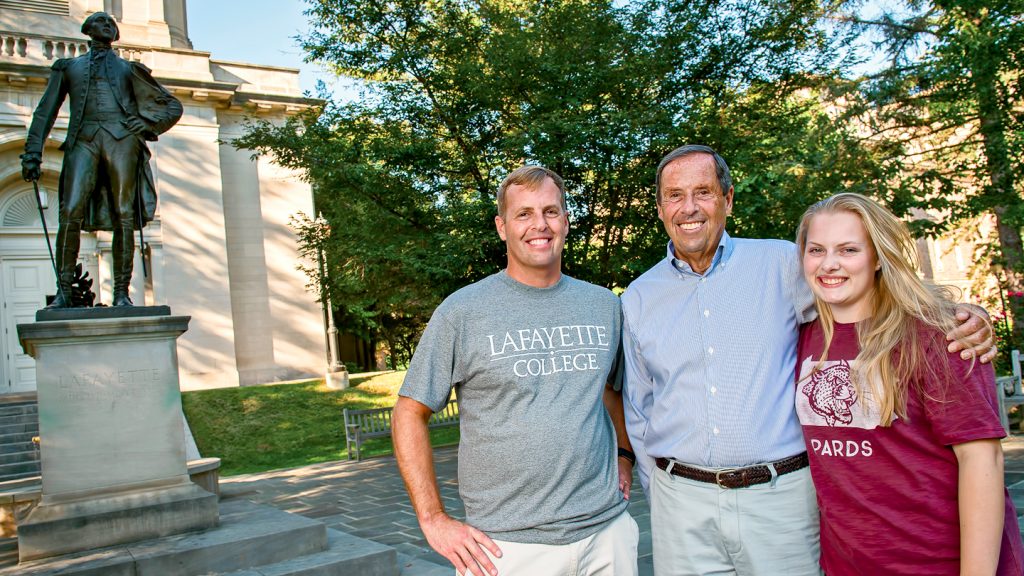 For the Cornell family, Lafayette connections, customs, and coincidences are commonplace. It’s been that way for generations, dating back to the original member of the family to attend Lafayette, Joseph Fetherman Stier 1880. He practiced law in New York City at No. 11 Broadway and became vice president of Broadway Realty Co., which was involved with the Bowling Green Building in Manhattan, one of the finest buildings of its time.

His brother, Walter C. Stier 1884, an Easton music teacher, organist, and director of the Lafayette Glee Club, wrote the words and music to the College’s alma mater, inspired by the student tradition of gathering to sing after dinner.

He did not receive rave reviews for his work. He apparently shrugged off the rejection and stuffed his manuscript into a piano bench in Pardee Hall auditorium.

When he heard of a fire at Pardee in December 1897, he rushed there to rescue the music, charred slightly, and the Glee Club soon embraced it as the “new campus song.”

The Cornell side of the family can’t summon the tune or lyrics, but the pride runs deep.

“Walter would be disappointed—we even have ‘Stier’ as our middle name,” Joseph S. Cornell Jr. ’62 says with a wry chuckle. “But we’re happy that at opening convocation every year, the freshman class makes its entry onto campus by singing the alma mater. I hope future generations will come to know the alma mater.”

Not to be completely one-upped by the Lafayette convergence of the younger Cornells, Cornell Jr. and his father, Joseph Stier Cornell ’36, both resided in Easton Hall during their respective underclassmen years.

With each succeeding Lafayette generation and the alma mater legacy, the question had to be asked: Is there an expectation among Cornell family members to attend Lafayette?

Lafayette was certainly one of my top choices, but there was no pressure

“Lafayette was certainly one of my top choices, but there was no pressure,” says Grace, who plans to major in international affairs with a minor in art.

“But in a way, I grew up here and remember coming to campus for football games and homecoming weekends,” she adds. “My grandfather always gave me Lafayette sweatshirts and rain jackets. It was subtle, but I like that my family has been here for so long.”

Her father feels the same way.

“There was never a push to go,” Jay says. “It just fell into place after visiting other schools. I originally wanted to go to

Lehigh, like my sister, but that didn’t pan out. Lafayette accepted me and came in first.”

Grace, he says, wanted a small liberal arts college and looked at several in addition to Lafayette.

“As a father, I sat back and let her work it out,” Jay says. “But she enjoyed the social side of Lafayette and my close friendships made here. Over the years, she met her ‘uncles’ from my fraternity, Zeta Psi, and saw the close connections made on this campus. We always went to football games and weekend trips with Dad to see old friends.”

Jay’s father, Joseph, thought Lafayette would be the last college he’d attend, because he didn’t want to follow in his father’s footsteps.

“My father, who was raised by Joseph Fetherman Stier, loved the city and Lafayette College his whole life. All my grandparents lived in Easton while I was attending Lafayette,” he says. “I remember spending a weekend at my father’s fraternity house and afterward knew Lafayette was it. I applied and was accepted.”

So Fair, So Dear to Me

The Cornell family tries to temper its enthusiasm for Lafayette. But it’s not easy to rein in all the Pard pride that’s been accumulating for more than a century.

“We also have a number of relatives who attended Lehigh, including my daughter, but we no longer speak to them,” Joseph says.

Back in Grace’s room, a closer look around reveals no evidence from her dad’s stay there.

“It’s a little more frilly than when my dad was here,” says Grace, her room decorated with  strings of photos of friends and family, blue draperies framing the tall window, and some of the comfy pillows she carried up the stairs in August. “But it feels like home.”

We’ll gather by the twilight’s glow
In front of old Pardee,
In all the world no other scene,
So fair, so dear to me.
O Lafayette, O Lafayette,
To thee our voices raise!
While loyal lips and loyal hearts
Unite to sing thy praise.

Chorus
We’ll gather by the twilight’s glow
In front of old Pardee,
In all the world no other scene,
So fair, so dear to me.

And future years shall not erase
These gems of mem’ry rare,
But oft we’ll live the scenes again,
Impressed so firmly there.
O Lafayette, O Lafayette,
O joyous college days!
E’re while these loyal hearts shall beat,
We’ve loyal lips to praise.