Wearing a royal blue dress and long silver earrings, Susan Cassin Wilson ’80 fox-trots with her instructor across the sun-dappled floor of Fred Astaire Dance Studio in Doylestown, Pa. Forward and back, forward and back, as the rhythm of “Fly Me to the Moon” guides the tempo of their feet. Then, instructor Igori Bogatiriov pauses. Slight adjustment. He gently pulls her right hand a nudge higher on his left arm. 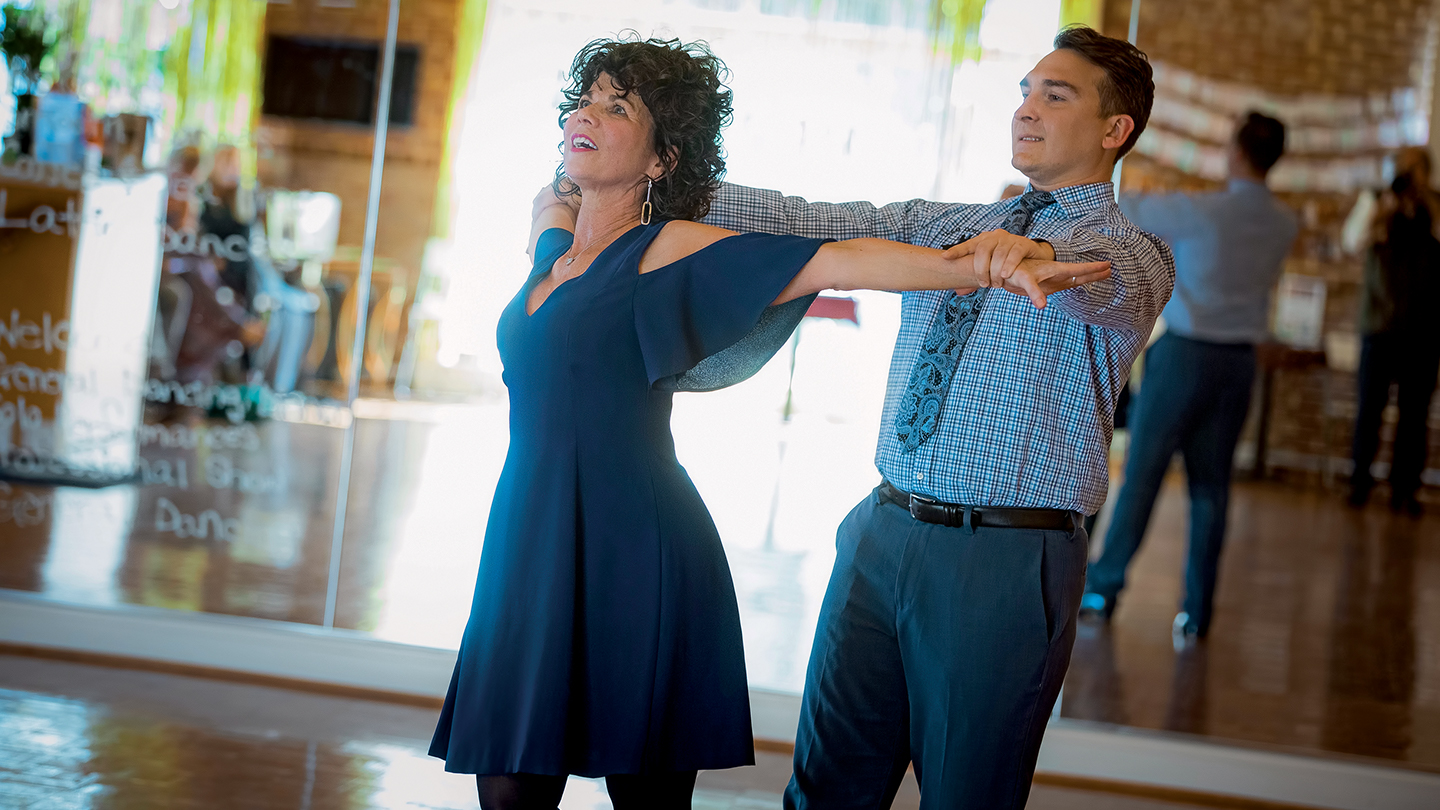 Twenty-three months ago, such movement would have been unthinkable for Wilson, who after undergoing surgery for a tumor on her spinal cord was told she might never walk again.

The news was devastating, but Wilson refused to be defeated, choosing to set off on a journey of recovery that would require a tenacity and humility she never knew she had.

In early 2015, after a couple of turbulent years, life was good for Wilson.

She was living in a new house in Perkasie, Bucks County, Pa., and working in two careers—as an executive leadership coach and as a Pilates instructor. Her children, Lauren and Kevin, had graduated from college and had good jobs. Following an amicable divorce in 2012, she was in a relationship with a man she deeply loved. 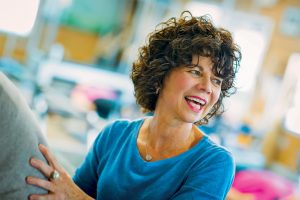 She reveled in her deep connections to close friends, including Susan Whitten Conners ’80, Susan Sheehan Lee ’80, and Daryl Beth Ganss ’80, who called her “Joanie” because Wilson’s black curls reminded them of Joanie in the 1980s TV sitcom Happy Days.

“I was so peaceful and content,” Wilson recalls. “I knew I was on this really good path.”

In March 2015, Wilson began feeling a pain radiating around her ribs. The pain would come and go, and after two rounds of medication she feared it might be shingles. She went to a neurologist, who thought she had a herniated disk, put her on steroids, and told her not to work for a week. “That night, I started to feel numb from my breastbone to my bellybutton,” Wilson says. “I walked the halls all night knowing there was something very wrong.”

The next day she called ex-husband Dr. Tom Wilson ’78, who told her to go to the emergency room. Wilson did as he advised.

“The ER doctor walks back in, he looks at me and says, ‘You have a mass on your spinal cord,’” Wilson says. “I just hung my head in disbelief.”

An ambulance immediately took her to St. Luke’s University Hospital in Bethlehem. Two days later, her family by her side, she received the diagnosis: A ganglion of capillaries, called a cavernoma, which was embedded in her spinal cord since she was born, had started to leak, putting pressure on the nerves of the spinal cord. It caused her to lose control of her lower body, including her ability to walk.

On April 13, doctors operated on Wilson for seven hours to remove the cavernoma and place a rod in her spinal column. It was a tricky procedure, and she spent a week in intensive care.

Her Lafayette friends were anxious to see her, and Lee was intrepid about skirting the “family only” rules.

“I went when she was still in intensive care,” says Lee. “I just kind of walked in with another family and got in. I was on a mission.”

In the days that followed, Wilson kept asking one surgeon if she would walk again.  He balked at making that promise.

“He kept saying, ‘It’s a long, hard journey ahead of you,” recalls Wilson. After two weeks at St. Luke’s, Wilson was sent to Good Shepherd Rehabilitation Hospital in Allentown, where she spent the next two months undergoing intensive physical therapy and trying to come to grips with her situation. Her children and partner, Tom Urso, rarely left her side.

During the first week of her stay, one of her physical therapists wheeled her between two parallel bars and told her she was going to walk.

“How can I walk when I can’t feel my feet or legs?” Wilson wondered.

The other patients cheered. Overcome by emotion, Wilson started to cry. She decided then and there she would walk again.

It was her 57th birthday.

“I could not allow myself to feel fearful and sad at that time,” she says. “If I had, I would not have survived the battle.”

When it was time for Wilson to go home, she could travel 300 feet with a walker. She still had a ways to go, but she was becoming stronger. Her daughter had altered her work schedule to be home with Wilson four days a week. Her son took over on the fifth day and was often there to help his sister. Urso was there for her in the evenings and on weekends.

During her recovery, Wilson had to put her leadership coaching and Pilates instruction on hold. That was difficult because she loves doing both, and her clients love her, says Carrie O’Brien, Wilson’s business partner in New Leadership Distinctions, who also takes Pilates lessons from her. They had been colleagues when Wilson—who majored in economics at Lafayette—spent 18 years working at Johnson & Johnson in the finance and tech departments.

“She’s an amazing, amazing coach,” O’Brien says. “Her clients talk about the impact that she has on them.”

Life is simple, and it’s good. I continue to live from a place of grounded hope—acceptance and confidence in my body, heart, and spirit to heal me and move me forward.

Wilson had shown leadership qualities early on. While Lafayette students in the late 1970s, she and Lee founded what is now Kappa Kappa Gamma, one of the first sororities after the College started admitting women in 1970. They met with college administrators, outlined how their sorority would benefit the community, created rituals and duties, and sewed the banner among other tasks.

“It was really very much Susan who spearheaded the idea,” Lee says. “Those leadership qualities, strong vision and positive energy—she’s always had that in every endeavor.”

In December 2015, eight months after Wilson’s surgery, June Hines, who owns Pilates studios in Doylestown and Jenkintown, Pa., where Wilson taught for 14 years, coaxed her to try teaching again. On her first day back, her students gave her a standing ovation.

“They were just ecstatic to have her back,” Hines says. “She’s a very determined person; she’s a fighter.” 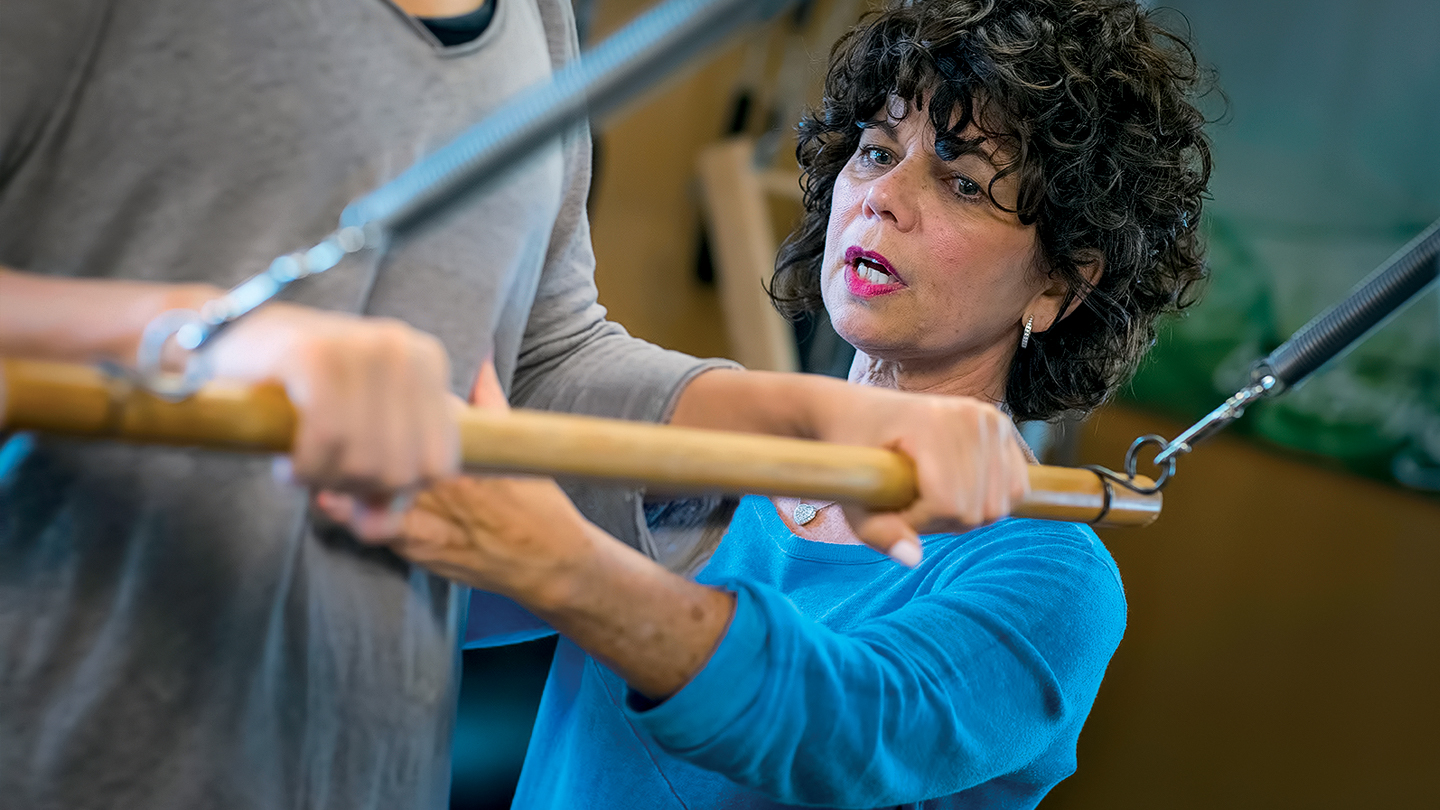 Susan Cassin Wilson ’80 works her Pilates magic with a client at the Doylestown studio where she teaches.

Except for a few bobbles with the cane, Wilson says she was still able to “kick some butt.” With each lesson she taught, she gained confidence. The warrior mindset she had adopted was paying off.

It was time to set her sights on another challenge.

In January 2017, Wilson began taking ballroom dance lessons as part of her own prescription for physical therapy. It was something she had always wanted to do, but in light of her ordeal she now felt a renewed urgency to engage in the art form.

“The first time I waltzed around the room, I started to cry,” she says. “Once I feel the music, somehow my muscles remember.”

Throughout her recovery, Wilson kept a journal that shows a woman veering at times from rage and despair to understanding and acceptance.

On the second anniversary of her spinal cord surgery she wrote, “I often tell others that who I took myself to be died on this day two years ago, and the ensuing journey has been one of literally and figuratively rebirthing myself.”

Today, Wilson lives in constant pain. She still hasn’t regained full control of her bodily functions, and she wobbles when she walks as “if my hips have a couple of scotches in them.”

Nonetheless, she considers herself rich beyond her wildest dreams.

“I can survive, and I can thrive. I don’t have to earn a million dollars a year,” she says.  “Life is simple, and it’s good. I continue to live from a place of grounded hope—acceptance and confidence in my body, heart, and spirit to heal me and move me forward.”

Back at the Fred Astaire studio, Wilson changes into exercise clothes and trades her sensible-heeled dance shoes for sneakers. Her face is flushed from the hour lesson, and she is beaming with joy.

“I’m going to get back in platforms one of these days,” she says.

Country singer Lee Ann Womack has a song called “I Hope You Dance” that Wilson’s late mother used to say reminded her of Wilson. It’s a compendium of wishes for love and life that a mother has for her child, set to the wistful yearning of a country melody. The last line says, “And when you get the choice to sit it out or dance…I hope you dance.”

In the face of unrelenting pain and reason to despair, Wilson chose to dance.