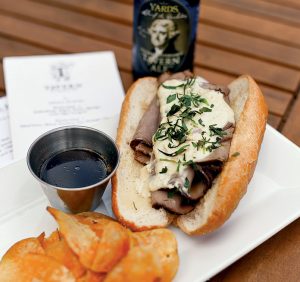 One hundred eighty-three years after his death, the Marquis de Lafayette is engrained in the culture of the nation. Cities, streets, baseball diamonds, and yes, even a certain East Coast college bear his name. During World War I, at the grave of the Marquis, U.S. Army Col. Charles E. Stanton famously yelled, “Lafayette, we are here!” The Marquis has responded thousands of times over—so is he.

We discovered this culinary homage to the Marquis on the menu at Tavern at the Sun Inn in Bethlehem, Pa. Lafayette stayed there while recovering from a leg wound received during the Battle of Brandywine on Sept. 11, 1777. Bethlehem served as medical headquarters for the Continental Forces twice during the American Revolution. Following the Battle of Brandywine, over 900 wagons containing heavy baggage and stores of George Washington’s army were parked in the lowlands to the rear of the inn.

Send us photos of the places you visit that pay homage to America’s favorite fighting Frenchman.