The first 15 miles on the Pacific Crest Trail aren’t much to look at. A hidden backcountry segment of the trail that ascends from Lake Morena County Park, the trailhead is small and narrow, lined with only chaparral and lime-colored boulders.

What Ben Shmaruk ’22 remembers most about those first miles is that they led to water—a rarity and luxury in the desert—and that on his first night camping on the PCT, in California’s Hauser Canyon, he had gotten through the first day of a journey that he had spent months mentally preparing for.

The task ahead of Shmaruk, however, was nothing compared to the fight his father, Alan, was facing with pancreatic cancer. That fight, and the fundraising Shmaruk was doing through PCT 4 PC, a nonprofit organization with funds going toward early pancreatic cancer detection, are what led him to the trail this past March through August. It was a once-in-a-lifetime opportunity that he knew he could accomplish by taking a gap year from classes.

“I had anticipated that a hike like this would destroy me, mentally. And at times, it did. Southern Oregon was really rough,” recalls Shmaruk, whose journey started at the U.S.-Mexico border and wound its way through California, Oregon, and Washington before finishing at the U.S.-Canada border. “I knew that I had enough backpacking experience to find my legs in the desert, and once I did, I continued with that mentality for the rest of the trip.”

The running diary of trail updates that he kept at pct4pc.com brought readers into the mind’s eye of what Shmaruk was experiencing during every leg of his journey.

There was the sticky, cloying heat of Tehachapi, where barren California desert country offered little in the way of views and zero shade or respite from the sun. There were the steep, snowy slopes of Glen Pass, where high elevations and slippery conditions meant a slower, more careful climb that daunted other hikers Shmaruk came across. There were also the jaw-dropping views of Mount Hood, the burn zone of Eagle Creek, the unexplainable beauty of the Columbia River Gorge, and an unforgettable walk across the Bridge of the Gods into Washington state. 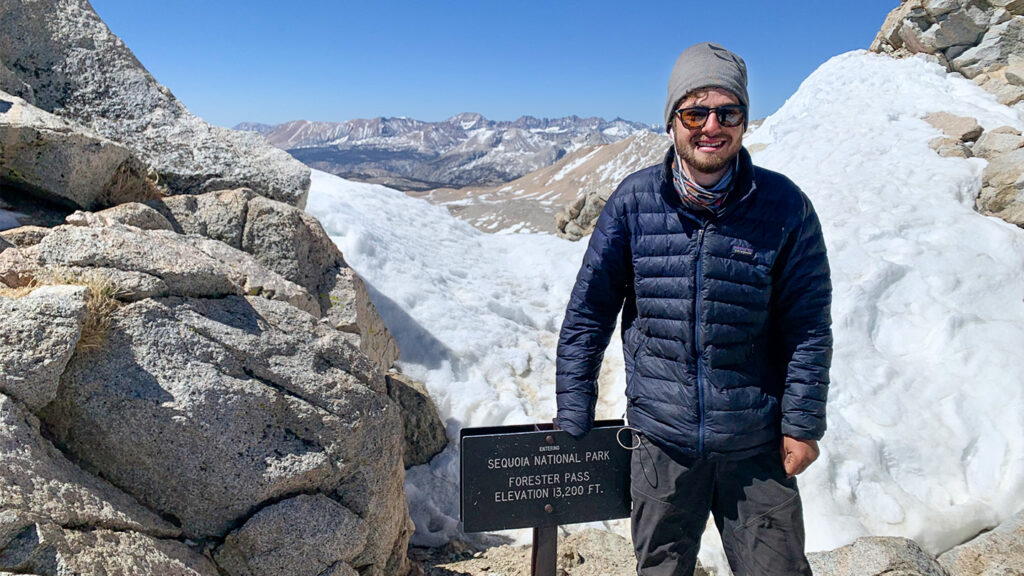 Shmaruk experienced every possible weather condition, wore his way through four pairs of hiking shoes, lost four days to an ankle injury, spotted eight bears, ended up in the ER for a dog bite, and spent most of the journey carrying 4 to 5 liters of water on his back.

Not once, however, did he think about quitting.

“No matter how brutal or tiring a day was, I knew the next one could be completely different. I’d look at finishing a tough day as rewarding, rather than dwelling on how difficult it was,” says Shmaruk, who made it back to Lafayette and rejoined society just in time for the start of the fall semester. “The hardest part of the journey was pushing 95 miles in three days to get to Bend, Oregon, by July 20. That marked 2,000 miles covered at that point. I averaged about 30 miles per day over the nine-day stretch leading up to that. It was physically exhausting and even tougher mentally, compounded by the fact that I saw very few people over those nine days.”

A social, upbeat person who generally has a smile on his face, Shmaruk got to know other hikers on the trail as he passed through certain areas. Just past Lake Morena, he met “Gadget” and “Pop-Up.”. In Warner Springs, he forged on with “Mac” from Vancouver. In Belden, he met up with “Sandstorm” and found a camping buddy for a few days. Every hiker has a trail name, and Shmaruk is known to other hikers as “Pinot”—a name bestowed on him prior to his PCT journey, when he brought a bottle of wine to a shelter in New Hampshire.

Those friendly faces and the camaraderie hikers find on the trail helped keep Shmaruk motivated. So, too, did visits on the trail from a longtime friend, his cousin, aunt, and both of his parents. Due to the length of his journey, Shmaruk would take days off from hiking—or what are known as “zero” days—to rest, recharge, and get access to a shower, clean bed, and decent food. 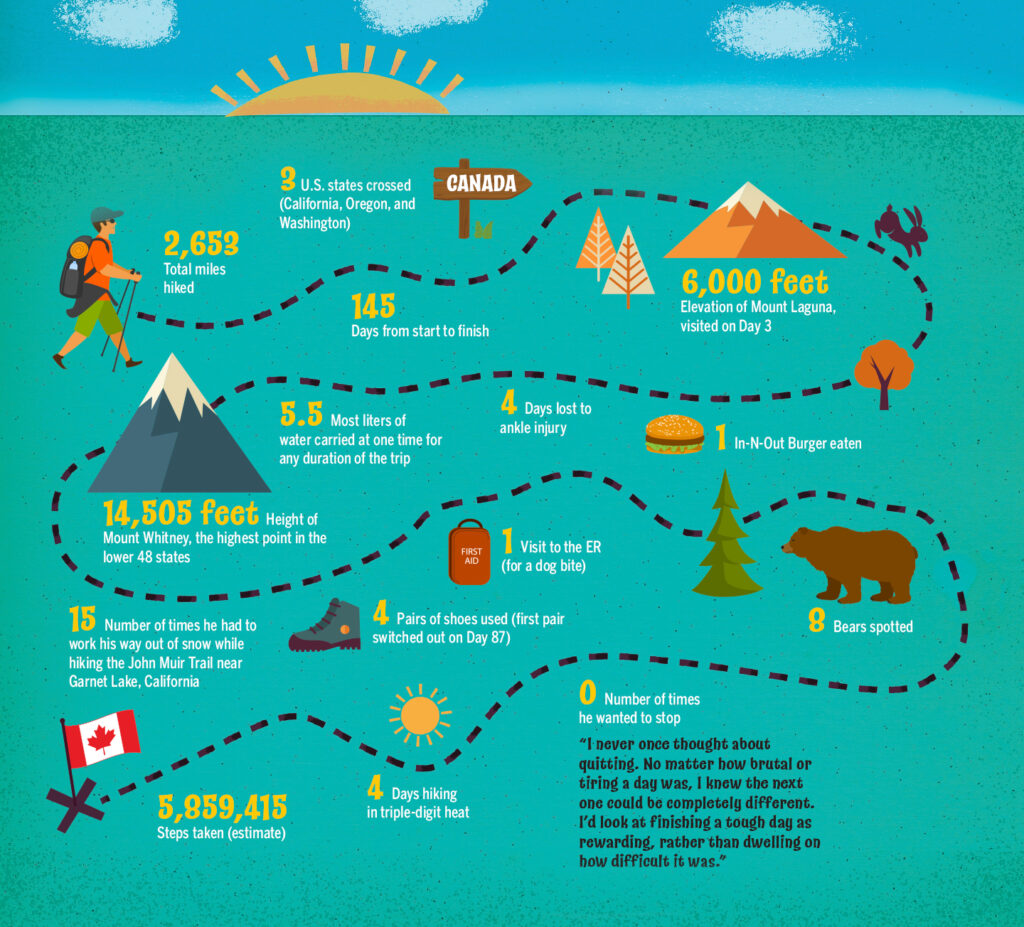 “I actually ended up getting to shower way more than I thought I would,” laughs Shmaruk, who estimates that he took at least 26 showers during his journey. “I won’t count all of the ones when I was on those ‘zero’ days during my [ankle] injury. There were also some really great hosts of B&Bs that catered specifically to hikers. At the Mountain Valley retreat, you get a bed, shower, home-cooked meal, and lots of hospitality.”

By the time he reached the Canadian border, Shmaruk had become a person who could trudge through snow, climb up crumbling rock, endure never-ending swarms of mosquitoes, ignore the sweat pouring down his face, go days without a change of clothes, hitchhike with strangers, and push on for miles when he felt dead on his feet.

What he isn’t, however, is someone who takes this accomplishment for granted. There may be other trails in the future and more ground to conquer. This one was for his father.

“Before I knew it, I was hiking the last mile of the PCT, and then I was at the monument. A confusing wave of emotions hit me. I was proud yet sad and not ready to end. Bittersweet does not fully encapsulate how I was feeling. I hung out for a couple hours, drank my bottle of pinot, and started making my way back to Hart’s Pass. The weather was lousy for the rest of the way out, but at this point I did not really care. The PCT was done,” he wrote in his online diary about that final day on the trail.

“There would be no more dehydrated meals or filtering water. I was just a regular guy again, having just accomplished something pretty special. I’m so glad to have had the opportunity to do something so amazing. This will stick with me for the rest of my life as I navigate my way through society. I would also like to thank all of the friends, family, and trail angels who helped along the way. I couldn’t have done this without your support.”