In my life and career, I’ve been fortunate to have had several influential mentors, teachers, and professors who helped me become the person I am today. Wayne Leibel stands at the top of the list for me, not only for what he taught me, but also for the way he taught me. 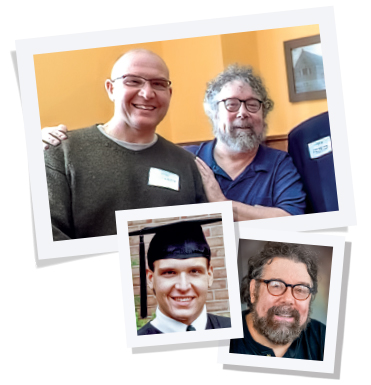 Gontarek (left) with Leibel at a 2015 Homecoming event.

I entered Lafayette in fall 1985 as a biology major with grand plans of going to medical school. I took classes that were part of the pre-med curriculum, and I enjoyed many classes taught by many wonderful professors. I felt part of a special community.

The summer after my sophomore year, I participated in a pre-med internship program through what was then known as Medical College of Pennsylvania. I won’t get into the gory details of my experience working in an emergency clinic in northeast Philly that dealt with work-related accidents and injuries. Suffice to say it left me certain that I did not wish to pursue a career in medicine.

I returned to Lafayette that fall feeling lost. What would I do with a degree in biology if I wasn’t planning to go to med school?

Then I took what turned out to be one of my favorite classes ever: Wayne’s course in molecular biology. It was the late 1980s. Recombinant DNA technology was advancing at a rapid pace, and the world was gripped by AIDS and the virus that caused it.

At the time, Lafayette did not have modern laboratories or expensive lab equipment that Wayne could leverage. Instead, he cited primary literature articles and drew complex data on the chalkboard. We were not able to sequence DNA ourselves in the lab, but Wayne wrote out sequencing data for us to analyze. From the information he provided, we had to piece together various bits of DNA and then decode the protein sequences that would be derived from it. Rather than memorizing and regurgitating information, he taught us how to think as scientists.

I began to develop critical thinking skills that would serve me well throughout my entire life. His class and his method of teaching opened my eyes to the world of science, and I was forever hooked.

Wayne was instrumental in helping me land a research internship that gave me the opportunity to practice the molecular biology and biochemistry techniques I had learned in his classes. He played a pivotal role in encouraging me to apply to grad school.

In addition to enriching my academic life, Wayne provided many fond memories outside of the lecture hall. We shared a deep love of music, and I was fortunate to have seen him play his accordion many times. He was a huge fan of zydeco music, and his face would light up whenever he played. It made me realize the importance of having balance in your life.

I will be forever grateful to Wayne for his mentorship and friendship.

Richard Gontarek ’89 is chief of staff and head of business and scientific operations at GSK Oncology.

Wayne Leibel, Gideon R. Jr. and Alice L. Kreider Professor Emeritus of Biology, remembered as an extraordinary scholar, professor, administrator, and person, died May 16, 2021. He received his Ph.D. from Yale in 1979 and joined Lafayette as assistant professor of biology in 1983. He was tenured and promoted to the rank of associate professor in 1989, promoted to professor in 2005, and was named Kreider Professor of Biology in 2007.