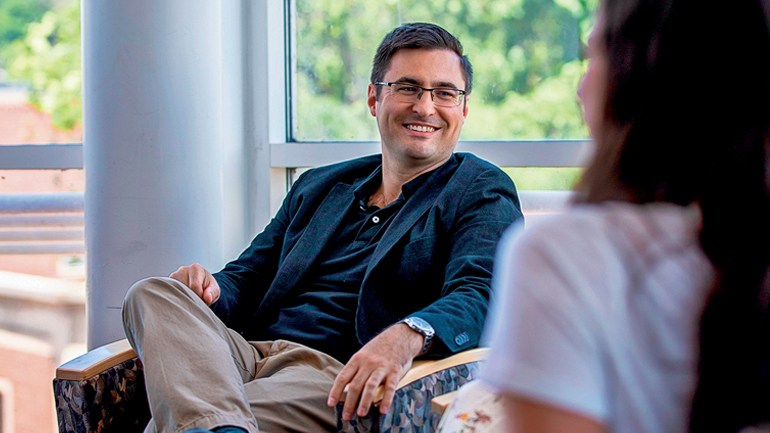 Since joining Lafayette’s faculty in 2011, Hines has accumulated over $1.2 million in research funding to further his study of the complex interaction between proteins—research that could eventually lead to effective treatments for diseases like Parkinson’s and Alzheimer’s. During his NIH grant cycles, he and his students have uncovered important findings about the fundamental molecular processes that underlie these disorders.

Hines and students study yeast proteins. Proteins usually fold spontaneously without issue into their final structure. But sometimes they twist into a disordered form and clump together, which prevents them from functioning properly. This is called aggregating, and it can cause brain damage. There is a special group of proteins called “chaperones” that can fragment aggregates. Hines studies the interaction between chaperones and a specific group of misfolded proteins in yeast. “The hope,” Hines says, “is that someday, once we understand the pathology of these diseases, we might be able to have effective treatments.” 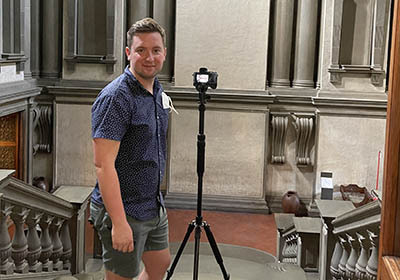 Eric Hupe, assistant professor of art history, is helping students better understand the scope, setting, and details of works of art. Using virtual reality, he is creating an immersive 360-degree experience. This past summer, Hupe collaborated with two student researchers to capture Michelangelo’s architecture in virtual reality. Hupe traveled with Mallory Brown ’22, art history and government and law double major, to Florence where they took digital images of Michelangelo’s Mannerist architecture. Their travel was supported by the Assante-Carrasco Fund for Honors Research Travel, which is part of the Global Learning and Community Engagement Endowment, a program that supports travel related to research in areas that explore current developmental, economic, educational, environmental, political, and social issues with a community-service focus. Back home, Caitlyn Carr ’23, art and English double major, downloaded the images, cleaned them, processed them, and then rendered rough models so that Hupe and Brown could see what other images and details were needed.

“Looking at slides in a lecture hall or a 2-inch photo in a textbook fails to capture so much,” says Hupe. “But to wear a headset and step into a virtual space, students can travel without leaving their room, avoid crowds, costs, and disease, and appreciate the sense of scale, the details, and the craftsmanship of major works.”

Advancing Equity and Inclusion in STEM 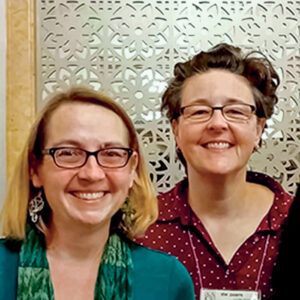 Students who were interviewed for the paper reported that the WGS course increased their awareness of systemic biases and processes, and enhanced their senses of both confidence and agency. Students indicated that the course strengthened their sense of belonging in engineering and empowered them to support peers experiencing marginalization. Several recommended the course be required for all engineering students.

Read more about faculty research at news.lafayette.edu/category/faculty-research
Our Pulse Our People