A teacher who learns and a learner who teaches are the basic roles of classroom participation. That simple declaration by education revolutionary Paulo Freire points to the essential dynamic at the heart of successful teaching, that is, “Education must begin with the solution of the teacher-student contradiction, by reconciling the poles of the contradiction so that both are simultaneously students and teachers.”

And thus, the importance of a dedicated physical space for skilled and dedicated professors — who continue to be learners themselves — to enhance and maintain their teaching skills.

Lafayette’s Center for the Integration of Teaching, Learning, and Scholarship, which opened two years ago, has been welcomed by faculty as a place to discuss issues related to teaching, a practice they hold in common and with which they are fascinated and challenged, as well as to examine the appropriate integration of technological tools.

“The center highlights the strategic plan’s primary mission, which is to support all faculty in enhancing and maintaining their skills as outstanding teachers,” says Provost Wendy L. Hill. The center assists faculty who are new to college teaching as well as those with long experience.

Located on the first floor of Scott Hall, the center includes a seminar room with computer and large-scale display for workshops, a lounge area where faculty members can drop in for informal gatherings, and a library focused on the research of teaching and pedagogy.

While the College has provided workshops, funding for faculty to attend seminars on teaching, and other support, the programs were not administratively centralized. “Having a physical space where people from different disciplines can come to talk and learn about issues they share in common is an important cornerstone in the support of our faculty,” says Hannah Stewart-Gambino, dean of the College. It brings together conversations about pedagogy and curricular renovation/innovation that already flourish across the campus in informal venues.

The impetus for a center devoted to college pedagogy arose from the faculty about 10 years ago, says Patricia Donahue, professor of English. When discussions for the College’s new strategic plan began in 2006, the faculty Teaching and Learning Committee, of which Donahue was a member, prepared a proposal that was incorporated into the 2007 Plan for Lafayette.

A touchstone for inspiration and recalibration of teaching methodology

The center is devoted to providing faculty with the resources to explore pedagogical best practices and nationwide trends in the uses of technology. The center’s director, Alan Childs, professor of psychology, was appointed by Hill, who noted that his experience and leadership make him well suited to working with colleagues across all academic divisions. During his 31 years at Lafayette, he has won numerous awards for teaching including the Marquis Superior Teaching award, and has served as dean of academic services, department head of psychology, and health professions adviser. He also spent a year at Colgate University as an American Council on Education Fellow in academic administration.

A SENSE OF COMMUNITY

The center offers scheduled faculty discussions that examine the teaching-learning interaction and consider how best to apply appropriate pedagogical techniques. Other programs include peer observations, open houses, e-communities, and workshops featuring guest pedagogical experts such as Mary Taylor Huber, scholar emerita, Carnegie Foundation for the Advancement of Teaching, and internationally known author on the scholarship of teaching and learning.

Since the center opened, about half of the faculty members have attended a program. They agree that it is a touchstone for inspiration and recalibration of teaching methodology.

“The conversations there jog the brain,” says Dave Sunderlin, assistant professor of geology. “I feel energized to do something different. For example, a session on using journals as a learning tool inspired us to try it for the January interim course on the geological and paleobiological evolution of Ecuador.” He explained that while a field book is routine for geologists to record measurements, the additional dimension of having students reflect on the “why” taught them to think critically. “It changed the way we teach interim courses,” he says.

Chun Wai Liew, associate professor of computer science, who has given presentations at the center on a mobile application for geology and on problem-based learning, says, “I use the center to learn about issues, and I like to make connections to other parts of campus.” He says some long-time faculty members may not be using the center simply due to heavy demands on time. “Nevertheless, the center is one way to reach out to other faculty with common interests. We want to improve teaching, and it is an important resource for that goal.”

Liew also emphasizes that it helps for faculty to learn the different teaching approaches used in other academic departments. For example, computer science is problem-based and changes constantly. “There’s a lot more emphasis on teaching by doing, but that may not be applicable to other departments,” he says. “I’ve found that sometimes there is a disconnect between my style of teaching and students who are from other majors. So, when I teach a first-year seminar or a computer course designed for non-computer science majors, I change my approach.”

Currently, new faculty members use the center more than long-time faculty. Childs says the difference is most likely the result of the year-long new faculty orientation program, which the center began directing two years ago. Orientation begins with a week focused on the center and its resources.

“That week created a sense of community for our group. We became a cohort right from the beginning with a focus on teaching, working together, and learning from each other’s strengths,” says Brett Hendrickson, assistant professor of religious studies, who arrived in fall 2011.

After talking with some experienced faculty members during panel discussions at the center, Hendrickson incorporated more frequent and smaller assessment tools in his classes, such as quizzes, papers, and tests rather than one or two major assignments. Also, on advice he picked up at CITLS, he had students conduct an anonymous class evaluation after five weeks. “As a new professor with a new group of students it was really affirming,” he says. “It was a relief to know my approach was effective.”

SEEING FROM THE STUDENTS’ PERSPECTIVE

Hendrickson, who holds a Ph.D. in religious studies from Arizona State University, is an example of what the center is meant to do — assist professors with pedagogical issues and support them in their ongoing development as excellent teachers.

For some new faculty members, the center was a factor in their decision. Lauren Myers, assistant professor of psychology, had benefited from the Teaching and Learning Initiative at Bryn Mawr College where she was a visiting professor. The fact that Lafayette had a similar program “showed the college’s interest in supporting and improving quality teaching,” says Myers, who holds a Ph.D. in developmental psychology from Penn State University, adding it was a major factor in her decision to come to Lafayette.

The appearance of teaching centers at colleges and universities across the country was spurred by two key factors. The first was the substantial amount of research in the early 1970s showing that traditional pedagogy was relatively ineffective, says Craig Nelson, first president of the International Society for the Scholarship of Teaching and Learning and one of the founders of the Scholarship of Teaching and Learning program at Indiana University. Professor emeritus of biology, he publishes and lectures extensively on college pedagogy.

“Since then, data supporting pedagogical reform has expanded more or less exponentially,” he says, resulting in the rapid increase in teaching centers in the past 20 years. At the same time, related research by cognitive scientists resulted in major breakthroughs in understanding how the human brain processes and retains information. For example, short-term memory is limited and can only process a certain amount at once, so a lot of information presented in a typical lecture comes at students too fast and is forgotten. In addition, some researchers have found that attention spans are decreasing and brain activity is changing as a result of growing up in a highly technological environment. 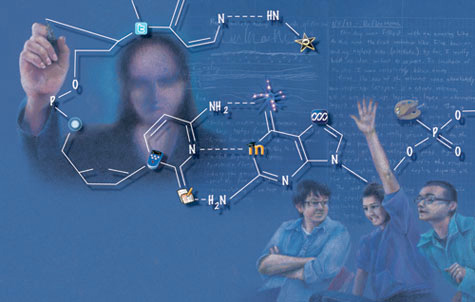 Second, as Childs points out, graduate students in general are not taught “how to teach.” Many members of Lafayette’s faculty hail from prestigious, large universities where the emphasis is on research and development of expertise in a fi eld. He says the built-in assumption is that if you’ve obtained a Ph.D., then you will know how to teach the information that you have learned.

Institutions that have recognized the gap and are providing teaching training as part of their doctoral programs include Harvard University, University of Michigan, and Stanford University.

Having received his Ph.D. from Stanford in 2000, Justin Corvino, associate professor of mathematics, says the mathematics department required a semester-long course on classroom instruction before graduate students could become teaching assistants. Once the course was completed, staff from the university’s Center for Teaching and Learning videotaped and critiqued their classes. “You saw your class from the students’ perspective,” says Corvino, who became a trained center volunteer so he could help other teaching assistants.

Corvino would like to see a similar program at Lafayette. “The center has to personalize its services if it wants to be really effective in helping faculty members improve their teaching,” he says.

Childs says a goal for the center is to be at the forefront of pedagogical research. For example, if a professor has found an inventive way to use Twitter in the classroom, then an evaluation can be done to measure its effect on a student’s capacity for learning.

“I’ve been a consumer of the information, especially about what psychology tells us about teaching methods,” says Chris Ruebeck, associate professor of economics. “It’s good to have a place that focuses on pedagogy and helps faculty become better teachers.”

“The center’s goal is to ultimately improve students’ experiences through faculty training,” Childs says. “It’s like continuing education for lawyers and doctors, not only staying on top of new technology, but also new techniques. We need to think of pedagogy as its own discipline.”

Working with instructional technology staff, the center hosts lunch-time sessions on the use of Word Press, a web-based design and blogging software; Google…