As successor to Hubble, the James Webb Space Telescope will look deeper into space than ever before to see the earliest stars and galaxies that formed in the Universe. 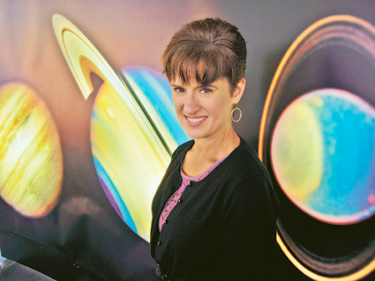 Donahue assembles the teams developing the optical telescope element simulator (OSIM). “OSIM will optically stimulate the scientific instruments on the telescope to verify their operation and performance,” she says. Being constructed at Goddard Space Flight Center, project completion is expected in June.

Donahue holds a master’s degree in computer science from Johns Hopkins University, and an MBA in finance from University of Maryland’s Robert H. Smith School of Business.

At Lafayette, Donahue, who had dreamed of following in her father’s footsteps to become a doctor, says that receiving a poor grade in organic chemistry “rocked the whole perception” of her life.

However, her outstanding performance in an elective computer science class so impressed her professor that he recommended that she consider a career in mathematics and computer science. She took the advice and graduated with degrees in biology and mathematics.

“The fact that I could earn a second degree was literally life-changing,” she says.