I often think back to my days at Lafayette, in the late sixties. It was a heady period, of course, with the Beatles and Vietnam. There was a sense of huge liberation from two decades of Cold War frigidness and cultural as well as political sterility. In any case, that’s what it felt like to me and to many of my generation. I felt this thawing at Lafayette, having arrived in the era of short-cropped hair and button-down collars, having left in a time of long hair and bell-bottomed jeans. And those fashion cues were just a very superficial sign of a transformation that was, in my view, deep and lasting. 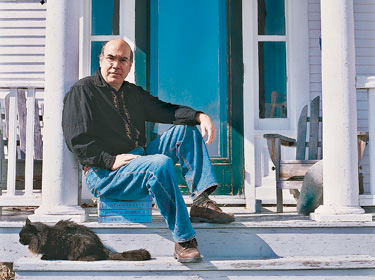 As I look back to my years in college, there are many things I feel grateful about. One of them was the mentorship I received. I was lucky to have two or three astonishing professors at Lafayette. One was Jim Lusardi ’55, a passionate professor of English, who taught me Milton and Shakespeare, who read my early poems with close attention, who offered me friendship and mentoring to the end of his life. I remain permanently in his debt. Another professor who changed my life for the better was Edward W. Brown.

Let me tell you something about Ed Brown. He taught at Lafayette from 1927 until 1973. He was a classicist, with a Ph.D. from Yale, who taught not only Latin and Greek but also history and Russian. He lived in a large house on Lafayette Hill, on Paxinosa Avenue, and it was a house of books. He had a vast personal library that crammed every wall in every room, and his students got to know these books firsthand, as he often invited us to his house for tea and conversation.

You could get to know Ed Brown personally at his Friday teas in Pardee Hall. He held these sessions every week, and half a dozen students would turn up to chat about literature and life under his civilized eye. He had a bright, witty, and wise manner, and he was thoroughly devoted to his students, who loved him. I asked him to be my adviser, and he agreed, and as a result we became especially close. I took every course with him that I could, especially in the area of comparative literature, and his sweeping lectures on Western classics from Homer through Dante and beyond were famous on campus at the time. It was a large class: Dr. Brown was a hero among professors, so he had no trouble filling a large room. And the lectures were astonishing: amusing, informative, moving.

To this day, I remember actually weeping when he read aloud from a famous passage in the Iliad. He did the death of Hector with astonishing vividness, and I’ve often gone back to that part of the epic with amazement. As it were, we moved with alacrity through Homer and Virgil, Dante and Tolstoy. Ed Brown read everything that he taught in the original language, of course, and I still remember him translating on the spot for me as we sat in his office — from Latin and Greek, Italian and Russian, even Dutch and Japanese. His German was especially fluent, and his published translations of Rilke’s poetry are still something I recall with great pleasure. After his retirement, he published a multivolume study of Russian literature that remains important in the field.

The scope of Ed Brown’s scholarship still seems almost impossible to comprehend. He was, indeed, a Renaissance man. He knew everything, as far as I could tell; but he wore his learning lightly, never attempting to dominate in conversation, never forcing a matter or making those around him feel inferior in any way. He was a gentle soul, and yet he somehow managed to communicate that he expected a fi rst-rate performance from every student. I worked hard for him, and he let
me know that he appreciated my efforts. From what I could tell, he treated every student as an adult, never condescending, always reaching for the best. Yes, he knew more than we did. He knew a thousand times more than we did. But that remained a kind of tacit understanding. He never felt superior to anyone. That was not in his emotional vocabulary.

I spent my junior year aboard, in Scotland, and throughout the year I corresponded regularly with him, sending him poems of my own in rough draft. He always replied at once, offering detailed critiques of the poems, giving me suggestions for reading. He knew exactly what I needed to read to advance in my own intellectual path, and I’m grateful for his alertness to those needs. (I was only recently browsing through an old copy of Thomas Mann’s stories, and I found notes that I had made that year in response to something Ed Brown had said to me.)

When I returned for my senior year at Lafayette, Ed and I drew even closer. Not surprisingly, to me, we remained in touch through my years in graduate school, and when I got my fi rst teaching job — at Dartmouth College, in New Hampshire — I remembered thinking: I’ll be close to Ed Brown.

In his late seventies, Ed had retired to a remote farmhouse in Vermont, living only forty minutes from where I had landed, on the New Hampshire-Vermont border. I was invited to dinner within a week of arrival, and I often drove to visit him. He soon came to see me in my little faculty apartment at Dartmouth, and several times he attended my classes at Dartmouth, offering me comments on my teaching that proved immensely useful. In fact, I often think of Ed Brown when I enter a classroom to this day — and I’ve been teaching now for 37 years. He remains a huge presence in my life, a model for what a professor can do for a student.

Mentorship is really a kind of friendship. It’s a directed friendship, one-sided at first, although in time the seesaw finds a balancing point. I found that point toward the end, with Ed Brown, and he stays in my mind and heart, one of the important voices in my head, a living spirit that guides my steps in ways that still surprise and delight me. I only wish he were still alive.