The journey from startup to thriving business is a road well traveled for Rick Klau ’93 of Mountain View, Calif. Now partner in charge of Google Ventures’ Startup University, the entrepreneur is helping others chart a course to success.

At Startup University, “students” from Google Ventures’ growing portfolio of companies tap into the combined business intelligence at Google. 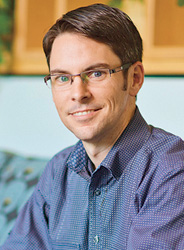 Klau, a French and international affairs graduate, holds a J.D. from University of Richmond School of Law, where he founded Richmond Journal of Law & Technology, the world’s first student-edited law journal to publish exclusively online. He also was involved in several technology startups including FeedBurner, TrialNet, and iManage.

Klau ran the campaign weblog for President Barack Obama’s 2004 Senate race, and managed Google’s presence at the 2008 Democratic National Convention. He created superdelegates.org to help the public understand the role these delegates play in the Democratic Party.

“Lafayette provided a great environment for me to try new things and not be bound by the status quo,” he says. “In fact, my first ‘startup’ was a political newspaper that a number of us formed ahead of the 1992 presidential election.

“Thanks to Lafayette’s early commitment to the Internet I got a taste of the technology that would become an integral part of my career,” he says.