In 1968, the College held a celebration in honor of H. Keffer Hartline, Class of 1923, who received the Nobel Prize in medicine in 1967, Philip S. Hench, Class of 1916, who received the prize in 1950, and their faculty mentor, Beverly Waugh Kunkel, professor of biology at Lafayette from 1915-1952. A year later, the new biology building was dedicated in Kunkel’s honor. 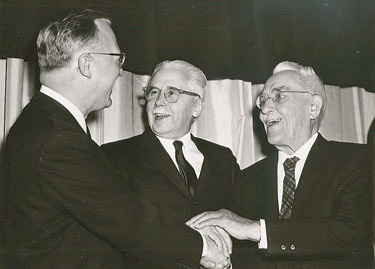 At the time, Lafayette was one of only 13 institutions of higher learning with two or more Nobel Prize winners among its alumni, and the only institution devoted to undergraduates. Kunkel said at the time: “I don’t think Keffer had been in the laboratory more than a month before I began to look upon him not exactly as a student, but as a colleague.”

Hartline won the Nobel for discoveries concerning the primary physiological and chemical visual processes in the eye. He was at Rockefeller University, New York, N.Y., at the time. The Nobel website states: “His college teacher of biology, Beverly W. Kunkel, encouraged him to undertake research. . . .”
More information.

Hench won the Nobel for discoveries relating to hormones of the adrenal cortex, their structure and biological effects. He was with the Mayo Clinic, Rochester, Minn., at the time.
More information.