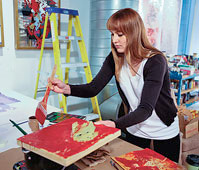 “ My EXCEL Scholars program mentor, Ed Kerns, Clapp Professor of Arts and Humanities, taught me technique and helped me learn to trust my own ability and vision. He has been a huge influence on my art. Working with him gave me the confidence to be an artist and stick with it.” 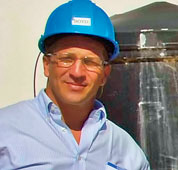 “ In today’s world, processes are everything and, in my experience, the more lateral, the better. I was inspired by quite a few laterals at Lafayette. For example, it always seemed like lateral magic when Arthur Gorman, associate professor of mathematics, related systems of a seemingly incalculable number of components back to an electrical diagram that was solvable. And the passions of Charles Holliday, professor of biology, and Bernard Fried, Kreider Professor Emeritus of Biology, inspired a view into job possibilities in another world. I now torment algae to produce oil and helped design a system to feed the waste to sea monkeys — and it excites me.” 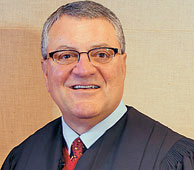 “ As a student, I spent a lot of time with Herm Kissiah [former dean of students], resolving issues affecting the student body. I first realized that I might have an aptitude for the bar as a result of those experiences in negotiating fair outcomes. Later, after graduating from law school, I found my first position through Ed Kirby ’58, who ran the public defender’s office in Essex County, N.J.”

“Two outstanding influences were Rosie Bukics, Jones Professor of Economics, and Michael Benitez, former director of intercultural development. Dr. Bukics taught me the importance of seizing opportunities and the value of community and networking, both professionally and socially. Finally, she taught me to respect and appreciate the journey to my goals, and to not forget the paths I have traveled. Mr. Benitez encouraged me to be insatiable about obtaining knowledge. He urged me to be true to myself, my heritage, and my ideals. His favorite saying was ‘be proactive, not reactive’ — a mantra I follow today.” 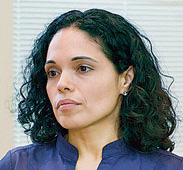 “College should not be an ivory tower where you isolate yourself from the world. John McCartney, professor of government and law, helped me to think about politics as a force that required you to act in the world—beyond simply voting. I was fairly involved at Lafayette, as a member of the Association of Black Collegians and volunteering with various organizations, including a soup kitchen and homeless shelter in Easton. I encourage every student at Lafayette to look beyond campus in order to get a full undergraduate experience.” 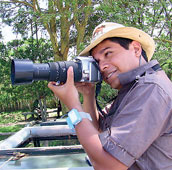 “What contributed most to my success was the EXCEL Scholars program. It prepared me for graduate research better than any coursework ever could. I completed two projects, the first with Andrew Dougherty, associate professor of physics, on the emergence of dendritic crystal growth, which merged my interests in computer science and physics. Later, I worked with Chun Wai Liew, associate professor of computer science, on improving genetic algorithms to produce the best possible solutions. You only realize how unique this program is when you talk to undergraduates at large universities and hear stories about them struggling to get the attention of faculty.”