In his autobiography It’s Not About the Bike, cyclist Lance Armstrong wrote: “Anyone who imagines they can work alone winds up surrounded by nothing but rivals, without companions. The fact is, no one ascends alone.” Armstrong didn’t win seven Tours de France without the dedicated support of a team. Truly successful people have help.

College students in America may have more in common with Armstrong than most of them imagine. In a recent study of the value and impact of the undergraduate experience, 89 percent of liberal arts college graduates reported finding a mentor in college, compared to only 66 percent at public flagship universities. The national study, released in November, was commissioned by the Annapolis Group, a consortium of leading liberal arts colleges, including Lafayette.

Indeed, many students choose liberal arts colleges because they recognize the advantages of individualized attention made possible by the smaller size, excellent faculty and administrators, and residential setting in helping them prepare for success. 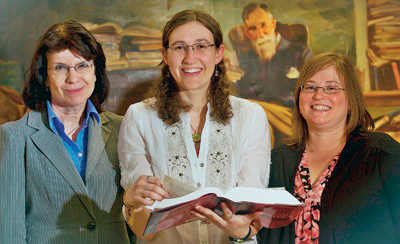 Lafayette students have remarkable opportunities to build a strong team of faculty, administrative, and alumni mentors. Take Jessica Frey ’12, a double major in chemistry and English who has been accepted to four medical schools. She plans to work in pediatrics. Thanks to her mentors, she may add author to her résumé as well. For her honors thesis in English, she wrote Operation Hippocrates, a 450-page novel. Alix Ohlin, associate professor of English, and Lee Upton, professor of English and writer-in-residence, both accomplished authors, helped Frey break the project into manageable pieces and soldier through 22 drafts.

“I came to Lafayette wanting to be independent, and it took me a while to realize that being independent didn’t mean that I couldn’t ask for help,” says Frey, of Pittsburgh, Pa. “Professors Ohlin and Upton have inspired me to be a better writer, better student, and better person. I would not have been able to write this novel without them.”

Frey also conducted nanotechnology research with Tina Huang, former assistant professor of chemistry, which they presented at PITTCON, a premier annual international conference on laboratory science, in Atlanta. Huang and Jennifer Rutherford, assistant professor of chemistry, helped Frey navigate the MCATs and medical school applications, but most important, gave her confidence when she doubted herself.

“The two-semester physical chemistry course challenged me, but I learned so much from it,” Frey says. “Sometimes you need a mentor to remind you to believe in yourself. Because of Professor Rutherford’s patience and willingness to answer all of my questions I was able to tackle subjects that were difficult for me, and I have gained confidence both in and outside of the classroom.”

Searching for confirmation that a career in medicine was the right decision, she found a mentor in Nancy Keller Shumeyko ’80, a gynecologic surgeon in Binghamton, N.Y., and assistant professor, Department of Obstetrics and Gynecology, SUNY-Binghamton Clinical Campus. They discussed the challenges a doctor faces during an externship experience tailored by Shumeyko to fit Frey’s specific interests.

Asking for help is only part of the equation. Jeff Snell ’12 didn’t hit campus thinking, “Okay, I need to find some mentors.” They found him.

A double major in international affairs and Spanish, Snell has looked to Michelle Geoffrion-Vinci, associate professor of foreign languages and literatures, for guidance. Finding the right career path can be hard, and she helped him realize that he needs to be willing to take chances. Geoffrion-Vinci had never considered becoming a teacher until she discovered a passion for it while participating in a student-teaching opportunity. Learning about her experiences opened Snell’s mind to taking an internship teaching Spanish to elementary school children.

“I wasn’t sure if I wanted to do it because I didn’t see myself becoming a teacher,” says Snell, who has accepted a job as a financial adviser for ING in his native Chicago after graduation. “She said that if it’s interesting to me and I enjoy it, then why not go for it. Doing the teaching internship didn’t mean I’d have to become a teacher. It was a great experience in itself. Even though I’m not going into education, I’m glad I took the course, and I thoroughly enjoyed it.” 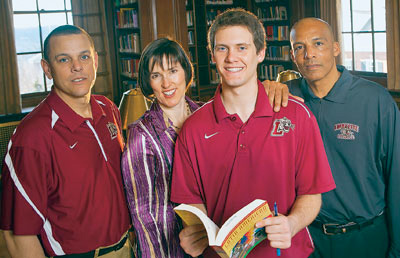 As an athlete, Snell transformed from a walk-on to a co-captain of the Division I Leopard baseball team and winner of the Harold “Moose” Hageman ’39 Award as Most Valuable Pitcher. He meets regularly with head coach Joe Kinney, who is helping him develop his leadership skills. Kinney’s advice has evolved from how to make it to the next level as an athlete, when he was earning his spot on the team, to how to nurture young talent as a co-captain. Assistant coach Gregg Durrah reminds Snell not to force something that isn’t there or try to do too much from the start, good advice on the mound or in life.

Having someone who also attended college as a student-athlete to talk to can make all the difference. Snell reached out to Kevin McKernan ’98, a former player involved with Friends of Lafayette Baseball, for advice on how to succeed in the classroom and on the field simultaneously. McKernan, senior manager of oncology at Cephalon Pharmaceuticals in Frazer, Pa., also has helped Snell network with other alumni.

“You can be the smartest person in the world, but the fact that you don’t have that firsthand experience yet means everything,” says Snell. “Talking with people who’ve been in your shoes and now have experience is more beneficial than assuming you have all the answers.”

When he arrived from Lahore, Pakistan, Asad Akram ’13 planned to stay under the radar, get his education, and move on. But that approach shifted when Akram, a chemical engineering major, began working with Tom DeFazio, coordinator of chemical and environmental engineering labs, as a lab assistant for an experimental design course. Looking to earn some pocket money and get to know the faculty better, Akram thought he’d just be putting beakers away, but DeFazio took the student under his wing and began teaching him what chemical engineering looks like behind the scenes.

“My mentors have shaped me into who I am today. I’m a different person from who I was when I came to Lafayette.” -Asad Akram ’13

“In engineering, I’ve learned there’s a disconnect between what’s written in a book and what happens practically,” explains Akram. “It’s people like Tom DeFazio who bridge that gap for us. He made me a lab assistant for a class I hadn’t even taken yet because he was confident in my practical skills.”

DeFazio introduced Akram to Joshua Levinson, assistant professor of chemical and biomolecular engineering, with whom Akram worked as an EXCEL Scholar, setting up the new micro and nanofabrication lab. Akram considers his experience with Levinson pivotal in shaping his skills as an engineering student and in helping him to think creatively.

Akram also began working with Jodie Frey, director of recreation services and acting dean of students, last year. Frey quickly recognized his potential and promoted him to associate facility supervisor. Having a mentor in administration has given Akram a unique perspective on the responsibility that comes with managing projects and people and has developed his leadership skills. 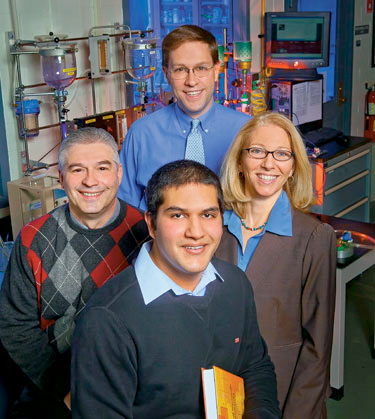 McKernan and Shumeyko illustrate that the tradition of mentoring remains strong even after students leave College Hill. As Snell and Frey learned, members of an extensive and deeply committed alumni network allow students to explore careers and learn from people who sat in the same classrooms not too long ago.

For Joelle Neilson ’12, an engineering studies major from Philadelphia, an internship with Curt Allen ’79, vice president of operations, Clark Construction, Bethesda, Md., paid big dividends. One of several mentors who have guided Neilson, Allen helped her land a job as a fi eld engineer with Clark after graduation.

Sharon Jones, former professor and director of engineering, encouraged Neilson to take concrete steps toward her goals. Jones steered Neilson to the externship program coordinated by Career Services, through which she shadowed Jim Fusco ’79, executive sales engineer for Boland Trane in Gaithersburg, Md., last January. It was Fusco who connected her to Allen.

“Curt Allen is filled with wisdom and charisma. He made sure I was on my toes and doing the work efficiently and correctly,” says Neilson, who also plans to pursue an MBA. “He instilled in me the right work ethic and told me I could do anything if I put my mind to it. He helped me through the process of deciding what the right job was for me.”

Another person who helped with that decision is David Veshosky, associate professor of civil and environmental engineering. “Professor Veshosky has helped me with my post-graduation plans, giving insight and expertise about working in the engineering industry. My mentor since freshman year, he has always been there for me and has been a great influence in my life. He helped me with material that was relatively diffi cult to grasp, giving multiple examples until I completely understood.”

Neilson says Veshosky’s support has extended to her athletic endeavors as well. “Being a former pole vaulter, Professor Veshosky has also been very supportive of my athletics; he has come to many of my track meets and has cheered me on every time I competed. He is a hardworking, dedicated, and passionate teacher, and a great person.”

Like Snell, Neilson juggles her studies with athletics — she specializes in the long jump and triple jump. She calls Bob Farrell, assistant coach of track and field “more than a coach.” He has helped her become more competitive and successful on and off the field.

Neilson “felt defeated and wanted to quit” after placing third in the long jump at the Patriot League outdoor championships last May. “But Coach Farrell told me to never give up and go after what I wanted,” she says. “The next day, I won the triple jump championship and broke the school record! Coach Farrell tells me I should always believe in myself and trust in my abilities.”

Knowing how important her mentors have been, Neilson is giving back as a Participation, Academics, Campus Life (PAC) mentor, a social peer-mentoring program that pairs underclass and upper-level students. Neilson shares advice that Jones, Allen, Veshosky, and Farrell have taught her so well — no one ascends alone.