There’s nothing ivory tower about the Poet Laureate of Philadelphia’s approach to writing. That’s because Yolanda Wisher ’98 loves playing with words, singing them, slapping their rhythm on the skin of a drum, and riffing with other artists to create something fierce and new.

This is how she lives her art. It’s also how she teaches it.

Not long ago, she was asked to conduct a poetry workshop with young people ages 12 to 15 from the Center for Grieving Children at World Café in Philadelphia. She had been invited by the founder of LiveConnections, an arts organization that inspires learning and community building through music making.

The session’s theme was percussion, and Wisher introduced poetry’s relationship to rhythm by reciting “Cat Scat,” her voice firing the words like a nail gun. 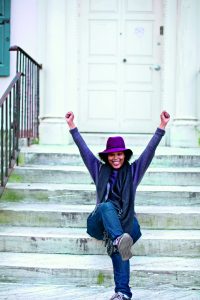 Then she asked the group to pick a color from an array of paint chips and write a memory or feeling triggered by the color about the person they’re grieving. The exercise was pure Wisher; employing tactile creativity to dislodge ideas from the inner heart to the physical realm.

It’s also one of the many ways she’s engaged with the community since being appointed Philadelphia’s Poet Laureate by Mayor Jim Kenney last year.

The two-year position was created in 2012 after the previous mayor, Michael A. Nutter, attended an event featuring poet and activist Sonia Sanchez, a major voice in the Black Arts Movement. Inspired by Sanchez and wanting to recognize the vibrancy of the city’s poetry community, Nutter created the Poet Laureate program and named Sanchez as the city’s first Poet Laureate. She was succeed by Frank Sherlock in 2014.

The position involves spreading the power of poetry through acts of service, workshops, and readings as well as mentoring the city’s Youth Poet Laureate.

“It’s about trying to reach people. A lot of organizations already know that poetry is empowering and healing, that it’s also about literacy and self-expression,” says Wisher. And given the current state of our nation, the need for poetry is more urgent than ever.

Wisher believes poetry is a public art that can be shared among “lovers or strangers” and experienced in catalytic and healing ways. “As poet laureate, I’m trying to nurture new poets and audiences to help people claim personal power and agency through creative voice,” she says. “In my own poems, I’m trying to reclaim and retell family narratives shattered by and lost to slavery, poverty, and injustice.”

Over the past year, she has visited schools, libraries, and performance venues, like the one at World Café. She also collaborates with artists in various disciplines.

Last summer, artist Mat Tomezsko was inspired by Wisher’s poetry collection, Monk Eats An Afro, and created a mile-long mural titled 14 Movements: A Symphony of Color and Words, which incorporated text from her poem “My Name.”

It was installed along South Broad Street during last year’s Democratic National Convention. MING Media then created a video of Wisher reciting the poem while walking along the mural; Philadelphia’s Mural Arts Program distributed it through social media channels as a kind of welcome mat for the DNC.

In another collaboration, Automatic Arts, a local performing arts company, projected her poem, “the ballad of laura nelson,” on a wall of the Cliveden House, a national historic landmark. The words, set to music scored by Brent White, appeared and disappeared in a rhythm that dictated how the audience read the poem.

Wisher is interested in giving everyone access to poetry and, by extension, art from all angles. “I like to think about how poems fit into different physical spaces. I’m interested in seeing how people read a poem being projected on a screen—it presents a different kind of literacy.”

These ambitions are keeping her busy. She just performed at the Rosenbach Museum and Library as part of Black Heritage Month for an event called Blues for Black Opals, which celebrated black Philly voices that are not included in the library’s collection. She also was recently named a finalist for the 2017 Knights Cities challenge, for which she proposed opening a cooperative coffee house in her neighborhood of Germantown to build community agency and collective leadership.

And sometimes it’s freedom. The history of black people in America has always interested and inspired her, she says. When her African ancestors were brought to America and sold into slavery two centuries ago, they were not allowed to read and write. “Because of this history, my act of writing poems about my life or the lives of other black people–our real lives, not the stereotyped TV lives—will always be a political act, will always be a struggle against voicelessness and injustice and dehumanization. And what I can’t achieve in my writing, I feel compelled to do in person through teaching, performing.”

But her life wasn’t always poetry.

She started out at Lafayette as a basketball player with a partial scholarship and plans of becoming an international affairs lawyer. But she wasn’t happy with either choice, so after a year she quit the team and changed her major to English. Her mother worried: How would she afford Lafayette’s tuition? What would she do with an English degree? But Wisher had faith.

With the help of Carolynn Van Dyke, Francis A. March Professor Emerita, and a work-study position in the English Department, Wisher was able to complete her A.B. in English/Black Studies from Lafayette. 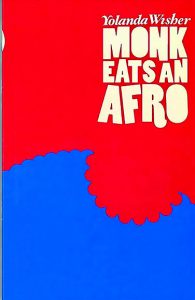 When she recalls her time as an undergraduate, she credits other English professors for having a significant impact: James Woolley for sparking her interest in satire and Alexander Pope; she wrote her own version of “The Rape of the Lock”; Beth Seetch, who took her to her first Dodge Poetry Festival; David Johnson, whose method of teaching poetry inspired her own classroom pedagogy; Suzanne Westfall, who gave her the confidence to perform (“Back then, she saw something about me on stage that I didn’t know existed yet.”); and of course, Lee Upton, the current Francis A. March Professor of English and Writer-in-Residence. “She guided me to create my first collection of poems for my thesis, and she didn’t complain about my bad font choices, i.e., Papyrus. She was so compassionate and respectful in her mentorship and tutelage. And she continues to support my work, like all of these Lafayette profs.”

After graduating from Temple University with an M.A. in Creative Writing/Poetry, Wisher spent 10 years as an English teacher and then became director of art education for the City of Philadelphia Mural Arts Program.

In 2015, as Wisher was approaching her 40th birthday, she applied for a Pew Fellowship. She worked extensively on its application by creating new work, including some recordings, a video, and photographs. “At the end of it, I came out thinking: I can’t go back. I felt I had outgrown that role, that kind of living,” she says.

So she asked herself: What do I want to be doing when I’m 40 that makes me feel like I’ve earned these 40 years? And that I’ll earn the next?

In that context, it was an easy decision. She quit her job at Mural Arts, causing her mother to worry once again, to practice her art full time.

The risky move paid off. Not only was she awarded the $75,000 Pew Fellowship but months later, she was appointed Philadelphia’s Poet Laureate. Now, in addition to the work she’s doing, she’s created the Outbound Poetry Festival, a series of pop-up readings by poets and writers curated by Wisher that will take place on multiple days in April at the 30th Street Station.

Back at World Live Café, after the young workshop participants finished writing, Wisher invited them to share their work. They were reluctant at first, but grew increasingly confident as they heard each other’s stories, realizing they shared the same feeling of grief.

And in this commonality, they connected.