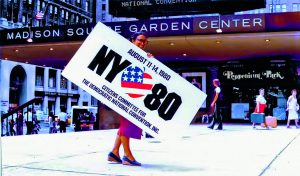 Lisa Kassel poses in 1980 with signage for the Democratic National Convention. The photo originally appeared in
U.S. News & World Report.

Lisa Kassel ’79 had a newly minted bachelor’s degree in government and law from Lafayette College when she applied for a job in the office of New York City Mayor Ed Koch in 1979.

“I had to prove how fast I typed,” says Kassel, now president of the Lafayette Alumni Association. “I wasn’t a secretary, I was never hired as that, but yet that’s how I entered. That’s what got me in the door.”

It was a year before the secretaries’ revenge fantasy movie 9 to 5, starring Lily Tomlin, Jane Fonda, and Dolly Parton, would satirize the sexism of office culture. Fortunately for Kassel, the man who interviewed her decided she was over-qualified for the typing pool, and she went to work for an assistant to the mayor. A few months later, she transferred to the city’s Commission on the Status of Women.

Kassel started working there in 1980, the year President Jimmy Carter declared the week of March 8 to be the first National Women’s History Week.

Since then, the week has become a month. This year on its 30th anniversary, schools, community groups, and others around the country will join with the National Women’s History Project in celebrating female pioneers who have been overlooked.

When the idea of celebrating women’s accomplishments was first hatched, Kassel’s job was to help produce materials on notable women in history for schools, and she worked to encourage and publicize celebratory events around the city.

“It’s not an understatement to say there were hundreds of events happening,” she says. “It was an exciting time to be involved.”

She lobbied on women’s rights issues at the New York State Assembly in Albany and joined marches in Washington for the Equal Rights Amendment, which still has not been ratified by Congress.

“It’s so important to teach women about who came before them and what they were able to do,” Kassel says. 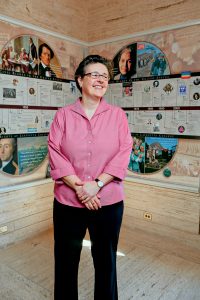 “In typical fashion, people chipped away at it. First you get a week and then you get a month and hopefully it will be every day of the year. ” Mary Armstrong, professor and chair of Women’s and Gender Studies

In the early 1970s, Molly Murphy MacGregor, cofounder and executive director of the National Women’s History Project, was teaching social studies at a California high school.

She came up with an idea to teach a summer class on women’s history and told a male colleague about it.

“He said, ‘Molly, you’re going to teach a class on women? That should take you about an hour,’” MacGregor recalls. “That was the prevailing attitude at the time: Women had done nothing.”

The seeds for this annual celebration were planted in the 1970s when the growing feminist movement touted the mantra “the personal is political.”

At the time, issues such as gender pay gap and matters once deemed private, like domestic abuse and rape, were finally being discussed in public, according to Mary Armstrong, professor and chair of Women’s and Gender Studies at Lafayette College.

“What characterizes this period is a recognition that these are social problems and not the problems of individual women,” Armstrong says.

The movement, which had been centered on white women, also started to change.

“Feminism of this period was deeply influenced by the Civil Rights Movement and early LGTB rights movements as well,” explains Armstrong. “The racism and homophobia that have characterized some of early feminism were sharply—and rightfully—critiqued.”

Where Did All the Women Go?

By the mid-1970s, MacGregor was teaching a women’s history class at a junior college and volunteering for the education task force of the Sonoma County Commission on the Status of Women. As part of a research project, she surveyed children’s libraries and found that only a few books made mention of women’s contributions.

“Boy, was it a wake-up call for me,” she says. “Women are written out of history. It’s about invisibility being the No. 1 form of bias. As Virginia Woolf said, ‘Anonymous was a woman.’”

In light of that imbalance, she and other activists worked to create a “Women’s History Week” in 1978, timed around International Women’s Day March 8. Organizers provided county schools and community groups with lessons about women who played important roles in history. They also held a “Real Women” essay contest, and the celebration culminated with a parade in downtown Santa Rosa.

The following year, MacGregor was invited to a conference at the Women’s History Institute at Sarah Lawrence College in New York where she shared news of the successful week with participants. Soon after that, support for an annual celebration spread across the country, culminating with President Carter proclaiming the week of March 2, 1980, the first National Women’s History Week.

By 1986, 14 states were devoting an entire month to redressing the historical narrative, and in 1987–the year Kassel left the New York City Commission on the Status of Women–Congress declared March would be National Women’s History Month permanently. 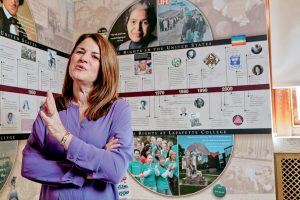 “In typical fashion, people chipped away at it,” Armstrong says. “First you get a week and then you get a month and hopefully it will be every day of the year.”

Efforts to teach women’s history often rely on writers and historians recovering stories from dustbins of the past. Armstrong, who taught a course called Gender and Science, Technology, Engineering, and Math (STEM) this past fall, says students these days seem more informed about pioneering women.

“They know about Marie Curie, but they also know about Rosalind Franklin, the woman who helped Krick and Watson discover DNA,” Armstrong says. “She was basically excluded from the Nobel Prize and fame, but there was a recovery project around her discussing how she was marginalized in science and why she didn’t get credit. Students know that story because there are men and women writing that story now.”

Armstrong says she emailed her Gender and STEM students weeks after the class ended last semester to give them one last assignment: See the movie Hidden Figures.

The blockbuster film tells the true story of African American women mathematicians at NASA who were vital to the effort to launch men into space in the 1960s, calculating by hand the complicated equations needed to chart trajectories for early space flights. All the while, they faced racism and sexism typical of the time.

Among memorable scenes in the film are those of genius mathematician Katherine Johnson running across the NASA campus at Langley Memorial Aeronautical Laboratory in Virginia, to use a “colored” bathroom because the women’s room in her building was for whites only.

Audiences are moved by the terrible indignity and how she no longer can contain her anger when her boss chastises her for being away from her desk so long. It’s a lesson that resonates today, Armstrong says.

“We see that now with restrooms relative to issues currently facing many trans-identified people,” she says. “Restrooms are not small things, they really matter. In the case of segregation, it affected her work. In the case of trans people, it affects their work. There’s a lot about the past that women’s stories bring forward that aren’t just about women.”

Women’s history is also about lives of ordinary people who helped build civilization.

“What we’ve really learned is it’s about heroes, but it’s about everyday heroes too,” Armstrong says. “So if no one is raising children and no one is doing domestic labor, no one’s eating. It’s not that they didn’t really have the chance to be famous, it’s that we haven’t recognized the important work they were doing.”

Studying women’s history can be an exercise in setting the record straight and removing the rosy film of nostalgia from the Good Old Days. It’s also about viewing major events through the perspectives and experiences of the other half of the country’s population.

For example, people tend to think of the 1950s as a time of “Leave it to Beaver” families where the husband went off to work and the wife stayed home to be a homemaker. But historians such as Stephanie Coontz, who wrote The Way We Never Were: American Families and the Nostalgia Trap, show that the family model has only been “traditional” for short periods of time and only for certain economic classes. 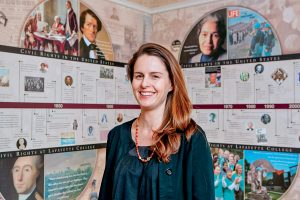 “It’s important for everyone to have individuals from the past they can relate to, people who aren’t simply “victims or side notes but rather central to the story of human history. ” Rebekah E. Pite,associate professor of history

Rebekah E. Pite, associate professor of history at Lafayette, says women went to work in large numbers during World War II when American men went off to fight. The standard narrative was that after the war, most women left the workplace and became full-time homemakers. In fact, women’s participation in the labor force increased after the war.

Deconstructing myths about families and domesticity allows men and women to look past stereotypes and recognize the complexity of women’s experiences, Pite says. It’s important for everyone to have individuals from the past they can relate to, people who aren’t simply “victims or side notes but rather central to the story of human history,” she says.

Consider Sandra Day O’Connor who graduated third in her class from Stanford Law School in 1952 after completing her degree in two years. She couldn’t find a job in the private sector, though reportedly some firms offered her work as a legal secretary.

Eventually, she got a job as deputy attorney for San Mateo County, Calif., while her husband was finishing his law degree. Several years later when they moved to Arizona, she still couldn’t find a job in the private sector and had to open her own law firm, says Susan Averett, Charles A. Dana Professor of Economics and co-author of Women and the Economy: Family Work and Pay. Such were the career obstacles faced by Day O’Connor, who would become the first woman U.S. Supreme Court justice in 1981.

Knowing the struggles of women who broke barriers has borne fruit in the attitudes and expectations of young people today, says Lafayette Alumni President Kassel.

“They’re growing up with the expectation that women can do whatever they set their minds to,” says Kassel, who sees that in her daughter, Rebecca Winter ’13 and son, Jason and Xander Winter.

“I think there’s no question that when a young person has a dream and can look toward somebody who’s living that dream, it’s inspiring. It opens up a whole world of what could possibly be.”

Highlighting heroes is part of the mission of the National Women’s History Project, which accepts nominations and selects women to be recognized each March. This year’s theme is “Honoring Trailblazing Women in Labor and Business.”

Despite strides in writing women back into history, the work is far from over, says Armstrong.

She tells them: “That’s the other 11 months of the year.”

Next time you clean and polish your car’s interior with antibacterial wipes or choose a dinner menu without worrying about carcinogens that might be in grains and nuts, Deborah Dixon ’79 is the one to thank.

Elizabeth Federici ’86 and Kathleen Squires ’88 have teamed up to produce a documentary of the life of the American food legend James Beard. Titled “James Beard: America's First Foodie,” the documentary will be aired on PBS May 19, 2017, kicking off the American Masters series, Chef’s Flight.