Would The Who’s “Baba O’Riley” sound as sweet without Pete Townsend’s frenetic intro hammered out on a Lowrey TLO-R organ?

That was the question Dan Sabatino, Adenbaum Scholar and associate professor of mechanical engineering, and a team of students set out to answer last year. Or more specifically, could a digital synthesizer, the kind popularized in the 1980s, match the sound quality of an analog synthesizer? 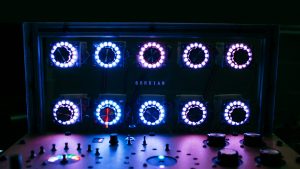 That led the team to invent Spirit Guide, a digital interface on the old analog models. In the belly of Acopian Engineering Center, more than a dozen students from majors as diverse as music and electrical engineering perspired over tangled cables and lighted knobs. Anthropology and sociology majors soldered wiring; music majors developed an iPhone app. A new team took over this year, and additional refinements have been added.

Lafayette has agreed to finance a U.S. patent that will list the names of all the students who contributed to the project as inventors. Plans call for the Spirit Guide to be installed in a sound studio in California once it’s complete. The next song with a cool synth track you hear might have a Lafayette connection.

The project is part of the X-Trained Engineering initiative funded by the Kern Entrepreneurial Engineering Network. Engineering faculty receive a stipend to develop experiences that foster thinking beyond the technical challenges of a problem to consider its humanistic, artistic, economic, and social dimensions.

There’s an App for That? 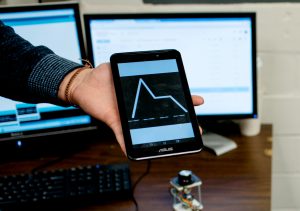 Johnny Gossick ’18, an anthropology & sociology and music double major, became hooked on electrical engineering last year, working with the Spirit Guide team, soldering wires and poring over circuit boards. The team called him the music guy, because he was one of the few members of the team who actually played synthesizers and wrote his own music.

Among his innovations was the development of a smartphone app. Theoretically, musicians could draw a sound wave on the screen of their phone. Bluetooth technology connected the phone to Spirit Guide. With the press of a button, the knobs and switches would move to create the sound.  It was a great idea, and the new team has inherited it. At the moment, the app can show a graphic representation of the volume of a tone, so you can see and change how the sound grows and fades when keys are played.

Last May, working out of two labs in Acopian, more than a dozen students pulled an all-nighter, sweating over a silver box that was Spirit Guide in those days. They were to present it to faculty and their peers first thing in the morning. It didn’t work. It happens. The learning is the important thing, not necessarily the end result. Engineering projects sometimes come and go without students seeing the full merit of their work.

Some members of the team graduated. Others moved on to new projects.But Spirit Guide didn’t die. Gossick applied for and obtained a digital humanities summer scholarship and created a web page on the synthesizer, its history and the development of Spirit Guide. 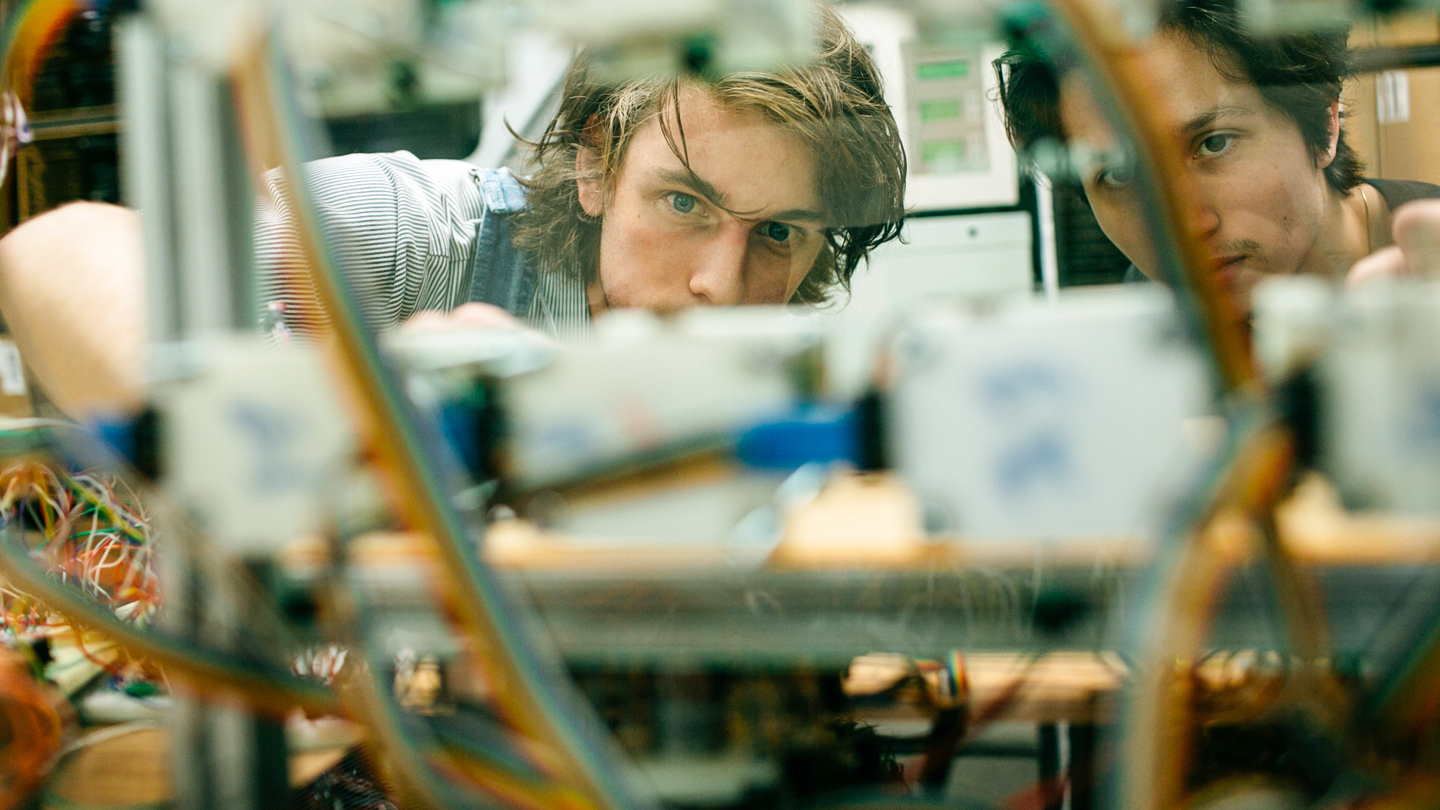 In the fall, mechanical engineering majors Calvin Murr ’17, Mitchell Abramo ’17, and Jack Hillman ’17 took over the Spirit Guide, adding their own refinements. The heavy lifting, Murr says, is done.

The joystick feature and programmable recall features are working. This spring, they’re tinkering with Spirit Guide and working out whatever kinks arise. For a guide, they’re using Gossick’s web page.  “They went to his web page to learn about synthesizers because they had never worked on one before,” Sabatino says. “So it’s like a beautiful story of people wanting to learn stuff and help each other out.”

In 2014, Sabatino visited a musician friend in California, who showed off a ’70s era analog synth he’d just bought, because he liked the sound quality better than the digital kind. Sabatino challenged his students—Can you prove sound from an analog synthesizer is of a higher quality than digital?

That didn’t happen, exactly. Instead, Lafayette mechanical engineering students decided it would be better to try to create a synthesizer that has the benefits of digital while still producing analog sound.

The trouble with the old analog units was that in order to recreate a sound you had to remember the positions of every knob and cable patch. With Spirit Guide, musicians simply press a button, and tiny motors return the settings to their previous locations.

A Joystick— But It’s No Game

A new enhancement to the Spirit Guide project this year is the addition of a joystick. For years, digital synths have included a dial or something joystick-like to their control panels, giving musicians the ability to alter the sound in simple ways—like a wah-wah pedal or a volume control.

But the Spirit Guide joystick can manipulate as many aspects of the sound as the player wants. The player defines the space, Sabatino says, and it’s never been done before, giving a musician previously unrealized control of the sound. “The dimensions are hard to imagine,” he says. “It’s totally awesome.”