ROTC at Lafayette hits stride with record number of recruits.

It’s one of those frosty November mornings when if you stir enough to read 4 a.m. on your bedside clock or smartwatch, primal instincts order you to pull up the comforter and fall back to sleep.

But this predawn morning feels different. 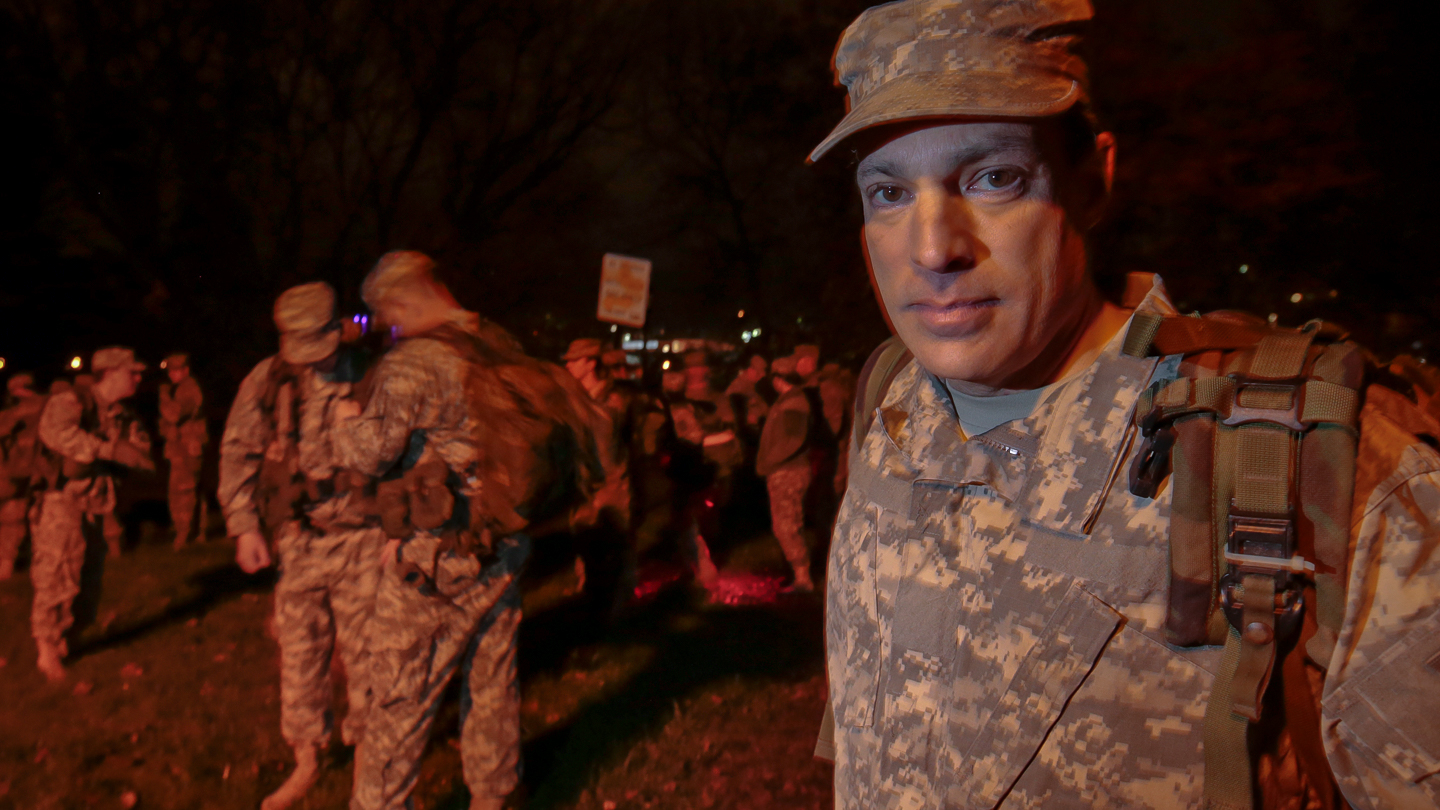 For weeks I’ve been looking forward to trying on my new set of work clothes, making it much easier to shake off any temptation to stay in bed. Forgoing a shave, I splash enough cold water across my face to bring me to life and reach for my ACU (Army combat uniform)—khaki T-shirt, heavy-duty camouflage trousers, and shirt. A camo patrol cap completes the look. I’m ready to join my Lafayette ROTC comrades for a training march along the Lehigh River.

Since the beginning of the academic year, senior cadet Dave McGriff ’18 (Flemington, N.J.) has been teaching me about the rigors of Army ROTC training, a combination of academics, military science, and physical fitness.

Now it’s time to put all that to the test.

We meet in the parking lot at Sand Island, a riverside park in Bethlehem, where McGriff provides me with an overview of what to expect along the wet, dimly lit towpath. He produces a 35-pound steel-reinforced backpack stuffed with metal plates, rocks, and military gear and helps hoist it across my shoulders. In my mind I hear the distinct bugle calls from the soundtrack to Patton fade into the morning darkness.

While most Lafayette students are still sleeping in their warm dorms, this group is enduring bone-chilling conditions that no amount
of caffeine can overcome.

“Fall in,” orders David Sadvary ’19 (Wilkes-Barre, Pa.), who is majoring in mechanical engineering. Cadets quickly form straight lines for one last accountability check. In an instant, khaki-clad cadets set out into the darkness.

This is one tough way to earn a scholarship.

This academic year there are a dozen dedicated ROTC students with a desire to serve their country, hone their physical strength, and earn a scholarship to help pay for their degree.

It’s the College’s largest roster of ROTC cadets since the program has been affiliated with the Lehigh Valley Steel Battalion. Hosted by Lehigh University, the program has attracted 71 students this semester from area colleges and universities. 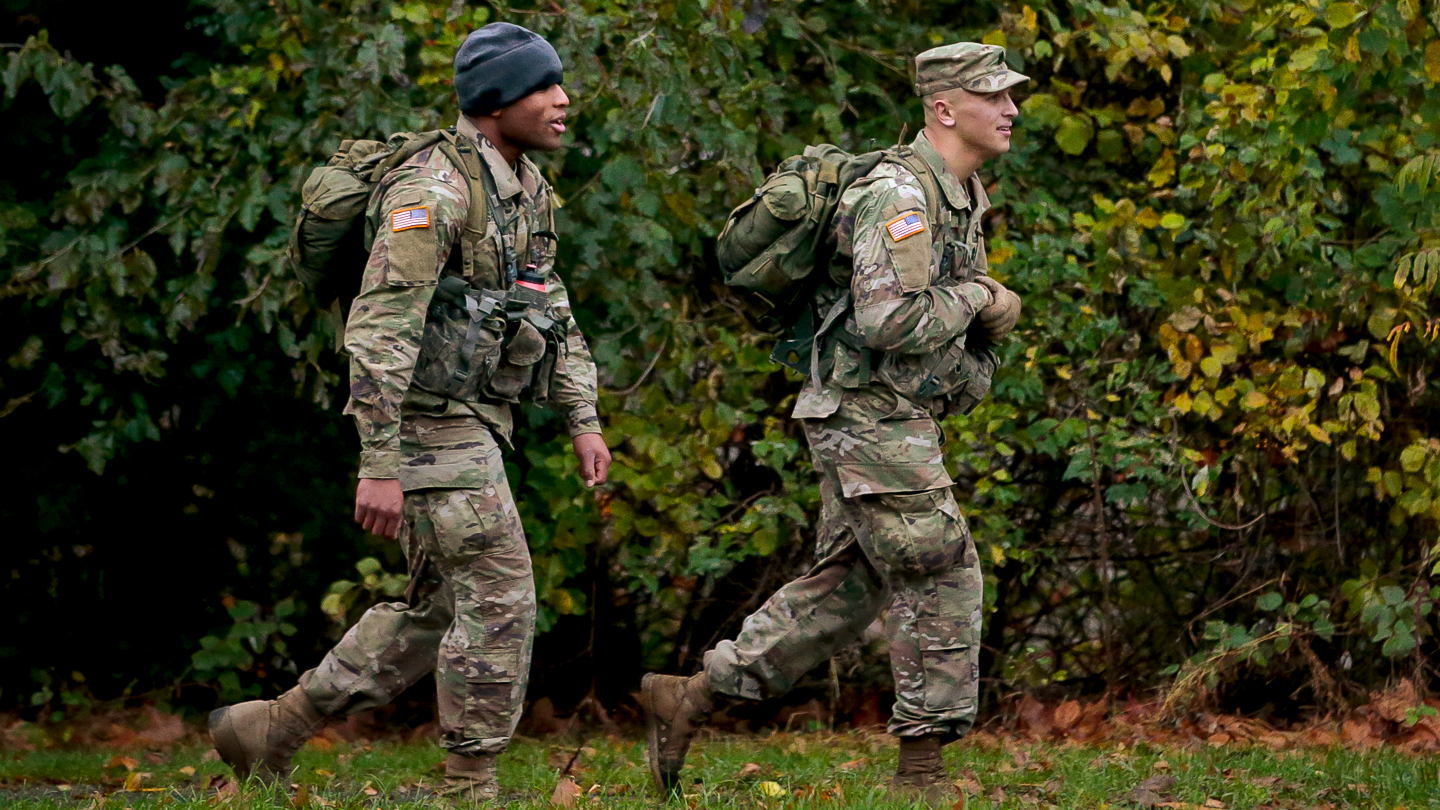 Increased participation at Lafayette is due in large part to McGriff’s efforts in bringing more of the required physical training—early morning calisthenics and long-distance ruck marches—to campus so students no longer have to drive to Lehigh several times a week for training. He recalls entering ROTC with three other first-year students, all of whom dropped out of the program because of the 18-mile commute to Bethlehem.

“I think having programs here on campus has helped attract more cadets and bring a Lafayette identity to the ROTC experience,” he says.

With ever-rising costs for higher education, there’s even more interest in ROTC. Cadets receive full tuition and allowances for books and other fees to the college or university they are attending in exchange for either a four-year active-duty commitment after graduation or eight years in the reserves or National Guard.

Successful cadets emerge from the program as commissioned second lieutenants. ROTC produces more than 70 percent of the second lieutenants commissioned each year into active Army, U.S. Army Reserve, and National Guard, says Lt. Col. Michael Farmer, chair and professor of military science and leadership at Lehigh, who oversees the Steel Battalion. The other commissioning sources are the U.S. Military Academy and Officer Candidate School.

A Desire to Serve

Tuition assistance isn’t the only reason cadets enlist in ROTC.

Maria Elizabeth Giambruno-Fuge ’21 (Ripley, W. Va.) was inspired to join because she wanted to serve her country.

“My father was in the Navy, and my older brother went through the ROTC program at Ohio State University, so they both played a role in my decision,” says Giambruno-Fuge, who plans to major in chemistry. “I like that with ROTC I am both earning a college degree and preparing to be an officer in the Army.”

“I knew I wanted to join the Army in my sophomore year after a visit to West Point—my dad is a graduate of West Point—and the best part about it has been the camaraderie with the other cadets, to be part of a group,” he says. “It helps you to become a team player and makes you mentally tough.”

“First, it opens up our financial aid resources and makes a Lafayette education more accessible for students who receive national or campus ROTC scholarships,” she says. “It also gives students an immediate avenue to get leadership experience on campus and the knowledge that they will graduate with the likelihood of a career in the Army.”

“I felt that I had the capability to be a leader as an Army officer, and ROTC allows you to develop those skills,” he says. “My hope is to become a helicopter pilot and establish a military career.”

ROTC Through the Decades

Lafayette’s military history dates back to its founding. However, its first proposed academic program, “a course of practical military science with the course of literature and general science,” was scuttled in 1832 when a mechanical and agricultural program with manual labor took the place of military training.

Military training returned in 1919, and ROTC became a regular and permanent part of Lafayette’s curriculum with courses offered as electives to all students. That changed in 1950, when ROTC was made a requirement.

Lafayette students demonstrated against it during the Vietnam War era, as did other students on campuses across the country, and in 1970 the College once again made it an elective. The program was offered jointly with East Stroudsburg University, then a state college, and later with Lehigh University, as it is today.

Alumni who were involved in ROTC say its benefits have served them well in positions of leadership.

“My time in ROTC taught me a lot about responsibility, leadership, and myself,” says Charles “Chip” Bergh ’79, president and CEO
of Levi Strauss & Co.

“I graduated from Lafayette one weekend, was married the following weekend, and off to Texas for officer’s basic training the next,” he recalls. “After five months, I was stationed in Germany for three and a half years. I had a platoon of commissioned and enlisted men, many of whom were Vietnam vets. They may have to salute you and call you sir, but it doesn’t mean they respect, trust, or follow you. I had to earn that.”

Bergh says the ROTC instincts kicked in. He rolled up his sleeves and served as a role model, performing every duty of those in his command.

“I got my hands dirty. I had gone to jump school prior to basic training. The first person out of a plane with a parachute is the most vulnerable,” he says. “Maybe you jumped too soon to hit the target. Maybe the enemy will shoot you first. As a leader, you have to be first out the door. And the last person to eat at meals.”

Back on the towpath, there’s a hint of morning light.

“Are you OK, sir, everything alright?” McGriff asks me as I trot down the trail, trying to balance the 35 pounds of rocks on my back and take notes at the same time.

He’s been addressing me as sir since the first time we met last semester. “Dave, it’s OK to call me Bryan,” I tell him. “Or, if you prefer, reference my ‘L’ number and staff writer–Communications Division. Has a nice military ring to it.”

Esprit de corps is all around, even as the young men and women pull ahead and out of sight along the path.

Throughout the exercise, I patrol the rear flank, an important position to maintain, to guard against a surprise attack; at least that’s what I’ve learned from movies and history books.

About 10 hours and at least a quart of coffee later, the whole experience seems like a surreal blur.

I bump into McGriff on campus in the late afternoon.

A mid-50 recruit for part of a day, I’m already growing sore, with a diminished gait, but regaining some measure of deportment as he approaches me.

By contrast, McGriff is heading to track and field practice, has a bounce in his step, and looks fresh and full of energy.