The national shortage of women in STEM-related fields has fostered a movement to spark girls’ interest at a young age.

STEM products like Space Scientist Barbie, GoldieBlox construction toys, and Project Mc2’s lab kits (lip balm, anyone?) are marketed with the goal of inspiring the next generation of female scientists, engineers, and mathematicians. 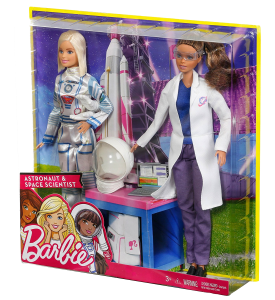 For Jenn Stroud Rossmann, professor of mechanical engineering, it’s a welcome addition to store shelves. “Representation matters,” she says. “I’m one of many women in STEM who had to wait until I was a working adult to buy a Lego figurine of a female scientist.”

Rossmann and colleague Mary Armstrong, professor and chair of women’s and gender studies, believe that efforts to bridge the gender gap also need to target boys. Creating gender-neutral STEM products—ones that include female role models—could be a step in that direction.

“These toys matter for boys as well as girls,” Rossmann says. “They expand our shared notion of who gets to be a ‘doer of STEM.’ They correct the record that has valorized only the straight white men who sat in the rockets. Boys who grow up understanding mathematician Katherine Johnson and astronaut Mae Jemison as heroes will also be part of building our STEM culture.”

The professors note that toys alone won’t accomplish the job.

“While all these neat and inclusive toys do likely help, they are limited in impact and only part of a larger strategy,” Armstrong says. “If a girl builds a rocket in Girl Scouts, but the school she attends has a hostile culture for girls and one that emphasizes the value of what boys do, you’ll only get so far. There has to be a social change.”