In June, the city unveiled plans for a proposed new $20 million intermodal transportation and commercial complex in downtown Easton. 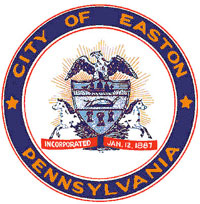 Envisioned are a bus terminal with eight bays and a three-level parking garage with about 400 spaces. These facilities would be located behind a three-story, 16,000-square-foot building fronting on South Third St. In addition to bus depot offices, the building would include space for retail, a restaurant, an athletic training center, and the National High School Sports Hall of Fame Museum, a project of the National High School Coaches Association, which is headquartered in Easton.

The proposed building features an open-air terrace on the third floor. A 5,000-square-foot courtyard, providing space for outdoor dining, also is planned. The city-owned complex would create a more attractive entrance to downtown Easton for visitors coming from Interstate 78. The city’s planning commission was scheduled to review the plans in early July.

Easton also plans to use a $3.5 million grant from the Pennsylvania Department of Transportation to widen sidewalks and install traffic-calming elements along South Third St. to narrow the wide thoroughfare and make it safer for pedestrians. Plans also call for enhancing the streetscape by lining the street with trees, adding decorative crosswalks, and installing streetlights with a historic look like those elsewhere downtown.