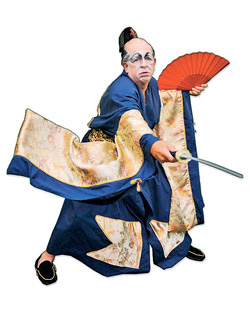 Being a character is a favorite pastime of George Jarden ’58, a pediatrician who lives and performs in Las Cruces, N.M. His one-man show called Gee ’n Ess ’n I (“G and S and I”), featuring a medley of Gilbert and Sullivan tunes, debuted in April at the Rio Grande Theatre in Las Cruces.

“I grew up listening to Gilbert and Sullivan, and I never stopped singing those songs,” he says. The show features excerpts from 11 of the 14 comic operas written in the late 1800s by librettist W.S. Gilbert and composer Arthur Sullivan, including such favorites as The Mikado, The Pirates of Penzance, and H.M.S. Pinafore. He sings, dances, and plays 70 different characters by interacting with recorded versions of himself projected on a screen.

Jarden shares his musical talent by singing with the children during his frequent visits to pediatric wards. He is also a member of The Graduates alumni choir and founded a male chorus in his hometown in 1970.