“Those stories really moved me because everyone has family that they care about,” says Rachel Ingber ’11, a coordinator of the therapy sessions. “I learned to look beyond a crime and see a person who may have been screaming for love, attention, and help by committing that crime. It could have just been a misunderstanding or one tiny decision that led to extraordinary consequences.”

The 90-minute sanctuary sessions were sponsored by the College’s Landis Community Outreach Center, under whose auspices students run more than two dozen sustained service programs each year. The center specializes in breaking boundaries and building partnerships. Volunteers and staffers aim to help themselves by helping others help themselves and others.

Charity as a four-way street was popularized on campus by two ministers of social justice. Seeking new ways to help students put faith into action, the Rev. Gary Miller, chaplain of the College from 1973 to 2004, began energizing student volunteerism in the ’70s. When Father Tom Hagan, O.S.F.S., came to campus as Catholic chaplain in 1983, he supported student efforts to feed Easton’s hungry, tutor prisoners, and “adopt” senior citizens. Miller helped Hagan turn a makeshift homeless shelter in a fraternity basement into Safe Harbor Easton, a shelter for homeless single men and women now operated by the Community Action Committee of the Lehigh Valley. Miller secured grants, hired the College’s first director of community outreach programs, and recruited more students to service through a First-Year Seminar.

In January 1996, Miller wrote in the Christian Science Monitor, “More than 700 of our 2,000 students are active in 25 programs of sustained voluntary service. In 1975, there were only two community service programs here.” He called the movement a “quiet revolution of compassion” and was very clear on this: “the impetus is coming from the students themselves—not faculty, not administrators.” 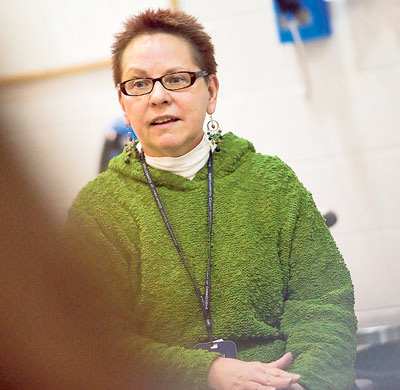 “We help students find out how they can make a difference in their community,” says Bonnie Winfield, the Landis Center’s director since 2006. “What are the real needs? Why do we have to have a Safe Harbor? Babies are drowning in the river, but sometimes it’s overwhelming, and we have to go upriver to fi nd out why they’re drowning.”

Babies guided Winfield to her activism baptism. In the ’80s, she traveled with a humanitarian group to witness poverty in Nicaragua caused in part by economic sanctions against the country’s oppressive government. As the mother of two children, she was particularly disturbed by malnourished infants. She asked how she could help. Teach democracy and global citizenship, she was told.

So, at age 35, she went to college for the first time, earning a B.A. and M.A. in sociology and a Ph.D. in peace studies at Syracuse University. “I went right through,” she says. “I fi gured becoming a professor was the most effective way to reach people.”

“The thing that most separates Bonnie from the pack is that she strives every day to make community a priority in her life,” says Amber Zuber, assistant director of the Landis Center. “For her, service isn’t just a requirement in her course or an avenue for co-curricular leadership for students. Service is a part of her life. She gets her hands dirty.”

Winfield and her Landis colleagues have added wings to the house built by Miller and Hagan. They’ve started student leadership teams for America Reads and Habitat for Humanity. They’ve planted trees, designed a cultural center, and surveyed problems door-to-door in Easton’s West Ward. They’ve transformed Kids in the Community, a program started in 1995 by three Lafayette students, into a soup-to-nuts, soul-to-soul mission.

Caitlin Flood ’12 has taught conservation and pollination to youngsters in public housing neighborhoods. The youngsters, in turn, have taught her to be a more compassionate leader. “The kids have a ton of energy and so many really funny things to say,” says the government and law/philosophy major. “They jolt me out of the Lafayette bubble into real life. I learn a ton from them, important and surprising lessons. These kids are just like us when we were kids. Yes, we’re here to help them with their homework, but also because they’re worth our time.”

Bonnie Buncher of the Easton Area Community Center describes Landis volunteers as motivators. By tutoring and entertaining young kids, they free staffers to serve older kids. They not only help youngsters with their lessons, they teach them to be better citizens—to tend bean plants while reading Jack and the Beanstalk, to make holiday cards for soldiers. They also give children something intangible: a new desire to attend college and learn how to reach out.

Landis volunteers are equal opportunists here and abroad. Through Adopt-a-Grandparent, Emily
Bernzott ’10 helped Bernice and Walter Smith handle the difficult move from their home to an assisted living
facility. Through the Alternative School Break program, Flood traveled to Ecuador to assist the Shuar Indians, who are politically disenfranchised for blocking development of their Amazon acres. She helped build a more convenient volunteer reception area to reinforce the tribe’s belief that trees house their ancestral spirits.

Landis volunteers have had a particularly profound impact on prisoners. Consider the case of Jodi Holtz,
who was jailed after marijuana was found in her car. The Easton native participated in the Landis Center’s arts and literacy program for prisoners, a natural for the holder of an associate’s degree in art therapy.  She discussed her legal dilemmas in Winfield’s course on women and the U.S. criminal justice system, in which Lafayette students and inmates had the same assignments, and classes were held inside the prison.

Holtz is so impressed by Winfield (“Miss Bonnie”) and her volunteers, she wants to be one. She’s willing to do anything, even drive inebriated students to their dorms. “I don’t want booze or drugs to damage their life forever. I don’t want to have to tell them: ‘The only thing that separates me from you is a brown jump suit.’”

Like volunteers everywhere, the Lafayette students occasionally hit brick walls of bureaucracy and apathy. Bernzott discovered that community service isn’t always prized in the community. She was tossing garbage into a dumpster outside an Easton apartment building when a kid asked her, “What, did you get in trouble?”

“I guess he thought I was in some work-release program,” says Bernzott, a civil engineering major from Babylon, N.Y. “It struck me as strange that working for your community seems strange for some people. For me, being a part of the Easton community is just as important as being part of the Lafayette community.”