While visiting his sister in a German hospital, Tom Heimhuber noticed a sign asking for bone marrow donors. With nothing to do but wait, he added his name to the list. Little did he know, that decision would change the life of someone halfway around the world. 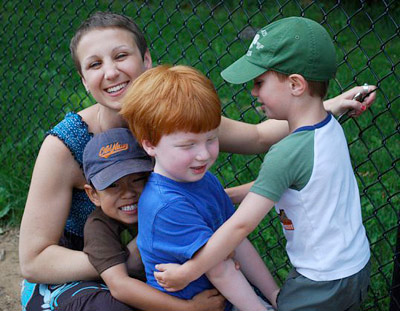 In 2002, Dani Shotel Greene ’98 of Arlington, Va., received a devastating diagnosis of acute myelogenous leukemia (AML). Her only chance of survival was a bone marrow transplant, and her only match was Heimhuber.

“Some things are just meant to be,” says Greene. “How lucky am I that he did that? If Tom had not gotten on the registry, I would never have survived my diagnosis. I am so incredibly happy to have Tom in my life.”

Greene’s parents, who also wrote It’s Good to Know a Miracle: Dani’s Story (Gordian Knot, 2008) chronicling her battle with leukemia, flew Heimhuber to Washington, D.C. for her wedding. Worried she wouldn’t recognize him, Greene took a photograph with her when she went to pick him up at the airport an hour before her rehearsal dinner.

As it turned out, Greene did not need the photograph. “I had memorized his face the first time I saw it,” she says. “I was just beside myself with joy to hug this man and stranger who saved my life. Tom was the most popular person at my wedding. People appeared much more interested in meeting the man who saved my life than congratulating me and my husband, Scott!”

After surviving AML, Greene and her family and friends became committed to raising research funds for the Leukemia & Lymphoma Society (LLS). Christening themselves “Team Promise,” they tackled the task as a second job. LLS invited Greene to compete to be Woman of the Year, a fund-raising competition limited to 10 women and 10 men per region. Over two months, Team Promise managed to raise over $50,000.

“It is a huge honor to be picked to compete,” she says. “In my case, it was very special because almost all candidates chosen have some type of link to a corporate sponsor. When I was chosen, LLS was aware that I was a teacher and that my husband works for the federal government.” Team Promise was inspired by the pledge campaign Demi Moore and Ashton Kutcher set up during Obama’s campaign but chose to avoid the word “pledge.” So they promised to do their very best to raise funds for research. “I now have a $50,000 research grant in my name, which was awarded to Dr. Lucio Castilla, associate professor at University of Massachusetts Medical School, for fighting blood-related cancers,” says Greene.

As a preschool teacher for children with disabilities in the Arlington County Public Schools, Greene says her experience with leukemia helped her understand what her students and their families go through on a daily basis.

“My whole life, I was what you would call ‘normal,’” she says. “I just fit in. I got decent grades, I was a good athlete. I was a responsible kind of kid. I had never experienced being different. I remember a particular day soon after my transplant. I was on steroids and bald and swollen and everybody stared.  In those moments, I knew what my kids felt like. Having this little bit of insight into how it felt to be different, even though my time was only temporary, gave me the ability to feel empathy and, if possible, more passionate about my job than ever before.”

A strong support system was one of the keys to Greene’s recovery, and her Lafayette connections came through when it mattered. Some friends flew to Seattle during her transplant procedure. Others raised money for her treatment, ran marathons for LLS in her honor, and participated in LLS’s Light the Night walks.

Greene says the attitude she brought to the mound as a member of Lafayette’s softball team carried her through her battle with AML. Winning was the only option.

“The moment I was diagnosed was the moment we all – my family and friends – determined that I was going to beat this thing. I think being a fastpitch softball pitcher for a good portion of my life helped me in many ways,” she says. “I know it sounds strange, but pitching is probably 90 percent mental. It is a complete head-game. I went into my illness with the same attitude I went into most games with: ‘I will win.’ Even when I played at Lafayette, I was by far one of the smaller-built pitchers, but I think my attitude made my confidence great.”