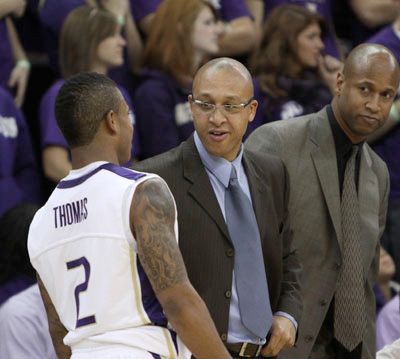 All that shouting and gesturing helped fuel a red-hot career in the prestigious prep school league. During his eight years in the league, he established himself not just as a championship-caliber team-builder, but as one of the nation’s best young recruiters.

Chillious was head coach of South Kent School in Connecticut for five years. He saw three of his recruits go straight to the NBA: Josh Boone to the New Jersey Nets, Dorrell Wright to Miami Heat, and Andray Blatche to Washington Wizards. He spent one year as business manager for Nike’s Elite Youth Basketball program before joining UW.

When Chillious arrived at UW in Oregon in December 2009, he was reunited with two of his other prize recruits: 2009 Pac-10 Freshman of the Year Isaiah Thomas and power forward Matthew Bryan-Amaning.

“Every conversation you have is a recruiting opportunity,” Chillious says. “I was born to recruit, whether it’s sports, college basketball, even if a company hires me or a school wants me to be a fund-raiser. I am a recruiter.”

He’s also an honest one. It’s a business in which dozens of high-powered, big-money schools are all gunning for the same talent; talent that will lure students and inflate budgets. Chillious says he always tells the truth and keeps his word.

“You have to always be authentic, and the best way to do that is to always tell the truth,” he says. “A lot of coaches are scared to tell players the truth because they’re afraid they’re going to lose the player. I’ve always felt that if you tell the player the truth about themselves and their game, and they decide not to come to you because of that, you didn’t want that guy in your program anyway.”

Though Chillious is dedicated to building winning teams, he also cares deeply about his players. One of the hardest parts of his prep school jobs, he says, was having to send a player home for academic or disciplinary reasons. Adjusting to boarding school life—the jackets and ties, the curfews, the loneliness—can be hard for students, particularly those from inner-city backgrounds. But rules are rules, even for students with dreams of college scholarships and NBA careers.

“You recruited the kid, you got to know the family,” Chillious says, “so you know the family situation, but the kid committed an egregious act and has to go home…This could be the tipping point in his life—in a good or a bad way. Most of the situations where I’ve had to do that, I’ve kept involved and helped the kid transition to something else. But at the same time, during that process you’re the one that’s delivering the news that they have to go home, and they don’t care much to hear from you at that point because they really don’t understand.”

Chillious was also a man of his word at Lafayette. After playing guard during his first year, he transferred to Pfeiffer University in North Carolina because he didn’t think the Lafayette seniors were competitive enough. But he promised that he’d return his junior year, when the program improved. And he did.

The competition he felt in the classroom was a big reason why he returned, and the reason why he chose to attend Lafayette in the first place.

“At Lafayette, there’s no distinction between being a student-athlete and a regular student,” Chillious, a Silver Spring, Md. native, explains. “In the classroom, you are graded by your academic merits and your preparedness only.”

He says Lafayette’s faculty was also an attraction.

“Even though Lafayette is a small college, it’s richly diverse in terms of the delivery of information and the professors,” he says. “I came to Lafayette with a narrow, microscopic view of the world. It was my first time in that type of environment where the social inequity between my roommate, Craig Kowadla ’96, a lot of other students, and I was so dramatic…But it really helped me look at it from a different perspective. Not ‘Woe is me’ and ‘I’m going to feel sorry for myself,’ but to say, ‘Wow, here I am with all these people with all these advantages in life, and I can compete with them in the classroom.’”

Chillious graduated with a B.S. in psychology and went on to earn a master’s in coaching studies with an emphasis on sports psychology from the University of Victoria in Canada. His knowledge of the brain and physiology helps him understand the way his players learn, and sometimes the way he reacts as a coach.

“You don’t want to self-diagnose or self-analyze,” he says, “but a lot of times when you’re coaching, whether you have a good team or a bad team, there are frustrations with players, and it helps you to take a step back and say, ‘Is it about them or about me right now? … A coach wants everything to be perfect, and in the real world, not everything is perfect.”