Elbern H. (Ed) Alkire Jr. ’58 was presented the Lafayette Medal for Distinguished Service, the College’s premier award for volunteers, at the 176th Commencement May 21. (See full coverage of Commencement on the web.)

A Lafayette trustee from 1986 to 1991, Alkire served on the Committee on College Relations. 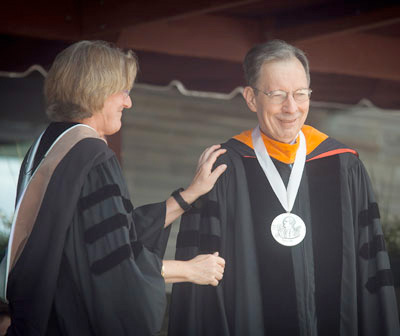 He was president of the Alumni Association from 1982 to 1984 and a Board Associate and member of the Committee on College Relations from 1980 to 1984. He chaired the Lafayette College Fund from 1991 to 1994 and served on the Lafayette Leadership Council from 1996 to 2000. He was presented with the Alumni Association’s Joseph E. Bell ’28 Award, given for service to the College or the association, in 1996.

Alkire’s service to the College is distinguished not only by his key volunteer leadership roles, but by his dedicated, consistent willingness to assist whenever asked. He has held eight leadership positions in alumni and development programs, six in Class of 1958 activities, three in chapter activities, and three as an Alumni Admissions Representative. In 1988, he received the William G. Wilson Award for distinguished service by an AAR.

As his class’ fund manager for 50 years, from the time of his graduation until 2008, he received the Joseph E. Losee ’94 Award and Ernest G. Smith ’94 Award. In 2008, he was elected class president. Having served on all 10 of the Class of 1958’s Reunion Committees and as chair of the 10th Reunion, Alkire also was chair of the 50th Reunion Gift Committee in 2007-08. As part of their Reunion gift that year, the class gave the College its second leopard statue; the first was their senior class gift. He received the Outstanding Reunion Volunteer Award in 2008.

Alkire and Gratia Greene, his wife of 50 years, are sustaining members of the Marquis Society. Alkire is a charter member of the Fleck Consistent Giving Society and a member of the James Madison Porter Society.

Alkire had a 32-year career with Air Products and Chemicals Inc., from which he retired in 1995. In 1975, he was chosen to serve on the Pennsylvania Governor’s Review team studying state-owned universities and was assigned to Bloomsburg University, where he later served as a trustee and foundation chair. From 1995 to 2001, he was executive consultant to the State System of Higher Education of Pennsylvania in Harrisburg. He now devotes his time to family and volunteering.