In September 1970, Lafayette welcomed its first official coeducational class with 146 women. About 30 members of that pioneering group from the Classes of 1972, 1973, and 1974 returned to campus April 29 for the inaugural First Women of Lafayette Reunion. 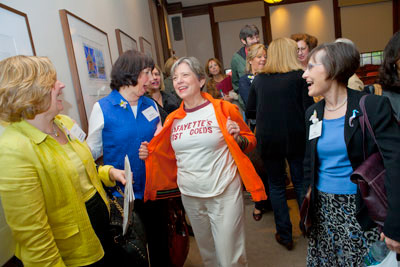 “Lafayette has always been special to me, and, while I don’t often return to campus, this seemed like the perfect opportunity,” says Karen Nettler ’74, director of community connections at Jewish Community Services, Baltimore. “I was amazed at how similar the campus looked as it did in my time, yet also changed. I admire the way the necessary development of new and renovated structures has maintained a consistent look over the decades.”

Others also noted and enjoyed the beauty of the campus as the day’s schedule took them from building to building to attend classes of their choice, a lunch presentation by students majoring in women’s and gender studies sponsored by the Council of Lafayette Women, and tea at McKelvy House.

“I was surprised at what an emotional experience the event proved to be,” says the Rev. Judy Thomson ’73, family ministry chaplain at St. Andrews Presbyterian Church, Kilmarnock, Va. “I found myself deeply reflecting on my life during the 40 years since September 1970. It was a delight to sit in on classes, and it warmed my heart that professors still know their students’ names.”

The attendees included several who own their own businesses, a minister, lawyer, psychologist, radio producer, marketing director, librarian, senior magazine editor, psychiatrist, and human resources vice president just to name a few of the careers. In addition, a number are involved in College voluntary leadership positions such as the Board of Trustees, class correspondent, and Alumni Admissions Representatives.

“I wanted to show that being one of the first women to graduate and the opportunities it afforded me in my business career were important to me, and I am very grateful,” says Shirley Blackall ’72, founder and owner of Blackall Associates Inc./Masterpiece Dolls, Providence, R.I. “In the business world, the best way to remove the glass ceiling imposed by others is to control your own destiny through entrepreneurship. Owning your own company gives you the opportunity each day to be compensated for your abilities regardless of gender.”

“They shared their quite unique views of the evolution through the years,” says Alma Scott-Buczak ’74, College trustee and assistant executive director of human resources at New Jersey Transit, Newark, N.J. “This was the most interesting session for me.” Several others agreed. “It was fun to hear from professors and staff who were around when we were the ‘war stories’ and about the process that went on when the decision was being made about coeducation,” says Thomson.

“You truly were pioneers,” Weiss said. “You faced hardship, hostility, and other challenges. And you had to make your way on College Hill without the benefit of role models. But you also had the exhilarating experience of exceeding the already high expectations that the College had for you when you enrolled. You paved the way for others through your hard work, your determination, and, above all, your success.”

Several attendees echoed the President’s recognition of the remarkable achievements of the first women of Lafayette. “I would say that I was extremely impressed by the successes of my fellow coeds,” says Meg Axelrod ’74, College trustee and an attorney with Muchnick, Golieb & Golieb, New York. “We took an informal poll of how many of us were working women, and everyone raised their hands. Everyone had satisfying careers, and most had achieved an enviable work-life balance.”

For nearly everyone, the highlight was the unveiling of the plaque to be placed in Ruef Hall to commemorate Lafayette’s move to coeducation (see “Plaque Honors Lafayette’s First Women” in this issue). Thomson says, “I was deeply touched by the plaque and the wording.” And Nettler adds, “Over all these years, I have always felt grateful that I was accepted to Lafayette. The Friday program made me feel so valued by the College.”

“It was a very exciting time in an environment struggling with the social and political issues of the era,” says Judy Campbell Hochman ’73 of Easton, a retired school psychologist. “This reunion was the first time that we, as a group, were recognized and thanked for being the first to walk through doors where we were not always welcome. The day on campus reminded us of our small number relative to the overall student population and the bond that we formed as we became the first faces of Lafayette College coeducation.”