Mikhail Gorbachev, who ended Communist rule in Eastern Europe and was awarded the Nobel Peace Prize, will deliver a major address at Lafayette October 19. His visit will celebrate the creation of a new center for global education made possible by the support of Walter Oechsle ’57 and his wife, Christa. 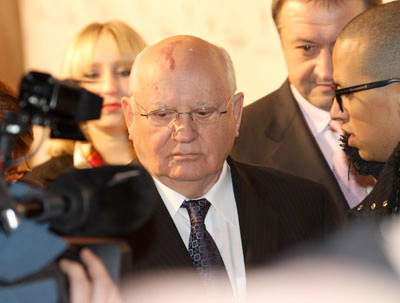 Mikhail Gorbachev, “a towering international figure who played a courageous and pivotal role in transforming our world.”

“Connecting the classroom to the world outside our walls is at the core of the College’s mission,” said President Daniel H. Weiss. “We are immensely grateful to Walter and Christa Oechsle for their exemplary dedication, vision, and generosity that are enabling the College to broaden the global dimension of our educational offerings.

“This initiative reflects our commitment to a curriculum that meets the needs of our students and graduates in a complex, rapidly changing world,” Weiss added. “We are honored that Mikhail Gorbachev, a towering international figure who played a courageous and pivotal role in transforming our world, will play a role as we launch our new center at Lafayette.”

The Oechsle Center for Global Education will be housed in a new academic building with faculty offices, seminar rooms, and state-of-the-art classrooms with international connectivity, in addition to space for public lectures and common areas to encourage dialogue about global issues.

Building on the College’s historic strengths, a significantly revised major in International Affairs will be the core of the global education curriculum. The curriculum also will include study-abroad courses, a capstone experience, community-based learning, and area-studies programs.

Additional details, including the time and location of Gorbachev’s speech, will be announced. As the general secretary of the Communist Party of the Soviet Union from 1985 to 1991 and president of the Soviet Union in 1990–91, he taught the world two new words, perestroika (governmental restructuring) and glasnost (political openness).

At the 1990 Peace Prize award ceremony, Gidske Anderson, chairperson of the Norwegian Nobel Committee, said, “The committee has made this award in recognition of the leading role Mikhail Gorbachev has played in the radical changes that have taken place in East-West relations. He has undoubtedly cooperated with other persons and other nations. But . . . his manifold personal contributions and his efforts on behalf of the Soviet Union have proved decisive.

“It has been suggested that the award of this year’s prize to [Gorbachev] was somewhat bold. Our boldness is, however, nothing like the boldness shown by Mikhail Gorbachev when he embarked on the course which has today led to the receipt of the Nobel Peace Prize, or the boldness shown by the many peoples of the Soviet Union too in rewriting history.”

The inaugural recipients were announced March 30 at a charitable gala celebrating Gorbachev’s 80th birthday at London’s Royal Albert Hall. They are Timothy Berners-Lee, the British physicist and computer scientist credited with inventing the World Wide Web (Perestroika category); Ted Turner, founder of CNN (Glasnost category), and Evans Wadongo, a Kenyan engineer who invented a solar-powered lantern that would become a clean, healthy source of light for tens of thousands of Africans (Uskorenie category).