By Roger B. Clow | Photography courtesy of Morgan West ’13 and Camille Borland ’13

Waking up sore, sunburned, and bug-bitten every morning for a week is not everybody’s idea of a great way to spend time during winter break, but in spite of such discomforts, a dozen Lafayette students found that living and working with the Shuar people of the Amazon rainforest was the experience of a lifetime. 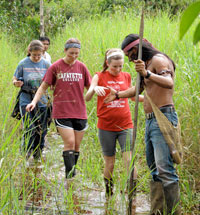 In January, members of the College’s Alternative School Break Club traveled to the village of Arútam in the Pastaza province of eastern Ecuador. Their mission was to help the members of that community build a botanical garden.

“The Shuar rely on the jungle for their medicines, using naturally growing plants and trees as means to help them overcome illness,” explains Ryan Shroff ’12, a psychology major. “The community decided to create a botanical garden, where they would transplant a few useful plants from the jungle so they could grow their own medicines and thus remove the need to constantly venture into the rainforest for them.”

CONNECTED TO THE ENVIRONMENT

The Lafayette team partnered with the Foundation for Indigenous Community Development in Pastaza (or FUDECOIPA). Founded by the villagers of Arútam in 2005, the non-profit foundation owns and manages the Arútam Rainforest Reserve, an expanse of more than 2,600 acres, and provides volunteer, tourism, and research opportunities in the reserve and surrounding communities.

The life of the Shuar is strongly connected to their natural environment. Traditionally they lived in clusters of semi-nomadic households, living from subsistence farming, hunting, and fishing. But in the middle of the last century, having lost a large amount of their indigenous lands to settlers, they abandoned the nomadic lifestyle and began forming fixed settlements. Today, according to FUDECOIPA, there are about 100,000 Shuar living in more than 650 communities.

The students and their adviser, Luis Schettino, assistant professor of psychology, arrived at their rainforest headquarters at 3 a.m. after a bus ride of an hour and a half from the provincial capital of Puyo and a long walk up a steep, muddy hill, where they knew for sure they had overpacked. (Puyo is a five-to-six hour bus ride from Ecuador’s capital, Quito.) They stayed at the rustic home of their native guide, Enrique, one of a half-dozen households in Arútam. 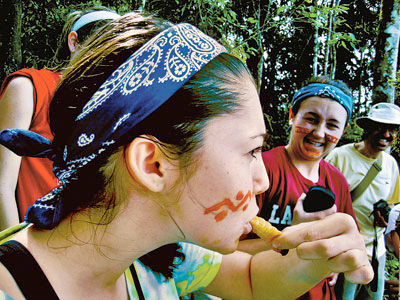 The exact moment when I let go of all inhibitions and adapted an open mindset in order to truly become immersed in the culture.

In the morning, they were given a tour of the village and surrounding jungle. “It was a nice way of easing into the week,” says Camille Borland ’13, a neuroscience major. “They showed us a schoolhouse where children learned English and other subjects. I found this very interesting. While the villagers want people to remain in Arútam and continue sustaining the jungle, they also prepare their youth for the outside world.

“Two of the most memorable moments were eating live larvae and getting our faces painted, using fruit for ink,” she adds. “I don’t know what type of insect the larva was, but Enrique found it in a tree. Eating it was the exact moment when I let go of all inhibitions and adapted an open mindset in order to truly become immersed in the culture.”

SIMPLE DOES NOT MEAN EASY

Morgan West ’13, also a neuroscience major, grew to appreciate what she calls the “simple yet incredibly and genuinely happy” Shuar lifestyle. But, she adds, “by simple, I absolutely do not mean easy. We all learned how hard a life it actually is as we experienced the physical labor that goes into sustaining a life in harmony with nature.” 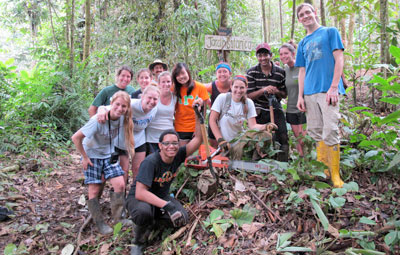 Taking direction from Enrique and other villagers, the Lafayette team worked on the garden from about 8 a.m. to 4 p.m. every day. Plans for the layout of the plot had been emailed in advance, so the students could envision the outcome. They cleared and leveled the land, using machetes to fell trees and remove roots and sheer strength to haul out rocks. They dug four irrigation trenches with shovels and hoes and constructed walkways of wooden planks. One afternoon they gathered medicinal plants in the jungle, heard from Enrique about their benefits, and planted them in the garden.

“It was a struggle to get it all done in such humid and buggy conditions,” Borland says. But as a neuroscience major with hopes of attending medical school, she was fascinated. “It’s not every day that we learn about how a certain tree sap can heal a wound, for instance.”

One of the most strenuous things they did was carrying wooden planks to Enrique’s house from a location in the jungle about a mile away. The boards will be used to construct a building in the garden. The team members walked into the jungle on a muddy path and each came out toting a seven-pound, eight-foot board. They did this three times.

“Walking to and from the first couple times was a struggle,” Borland says. “It was pouring, and the mud was getting dangerously slippery. However, by finding different carrying strategies and the team encouraging each other, we were able to complete the task well.” 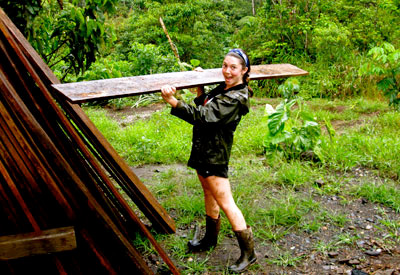 Camille Borland ’13 grabs her last plank. The students made three two-mile roundtrips into the jungle to carry out boards for a building project at the botanical garden site.

“The Shuar used power machinery to fell the tree and cut the planks,” Schettino explains. “They use a mule or a lot of manpower to bring in the saw. But both the saw and the mule are borrowed, so they don’t usually have access to them; hence our participation. I was amazed at how everyone did their part.”

Before the trip, Schettino worried a little about how everybody would get along, but the group worked together well. His goal was to be helpful and make the students’ experience as memorable and constructive as possible, and it didn’t take long for him to realize how to fulfill it.

“Practically none of the people with whom we had to interact — the bus drivers and our hosts at Arútam —could speak English,” he says, noting that John Bachner ’11 and Christopher Vinales ’13 could speak a good amount of everyday Spanish but were not fluent. “That meant I was the designated interpreter for the group. Of course, that did not stop many of the students from trying out their Spanish whenever they had a chance.”

Enrique’s brother and sister-in-law made breakfast, lunch, and dinner for the team each day. After lunch, the students had an hour or so to relax, read, or nap, “which led to many unwelcomed sunburns,” Borland says. Before dinner, they played soccer and other games with Enrique and his family and other volunteers. At night they gathered around a campfire and listened to native music and learned dances. 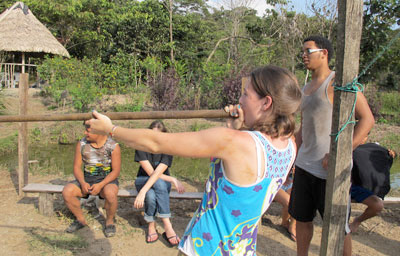 “It was great to be able to work with the community members then relax with a friendly game of soccer or traditional cultural games,” says Emily Defnet ’13, a chemistry major. “They spoke Spanish and their indigenous Shuar language, but we still managed to learn from them.”

For Borland, the food was a revelation. She liked it a lot.

“I came back a few pounds lighter, but not because I wasn’t eating. Everything they made were things they produced. Pineapple, mangos, bananas, plantains, yucca, soup, chicken, various vegetables, and the occasional homemade popcorn were just some of the fresh foods we ate,” she says. “This organic style of living was apparent in the Shuars’ appearance, from their healthy weight to the shine of their hair and the glow of their skin.”

Shroff says, “The Shuar community has been making an effort to assimilate modernity and technological progress with age-old beliefs about sustainable development. My time in Arútam gave me a better understanding of how sustainable development can help a small community achieve the right balance of progress and tradition utilizing the resources they have in their own backyard.

“As student volunteers, our physical help was important in helping them create their garden, but what was more important was our desire as active citizens of our community to learn about the Shuars’ views of sustainable development and bring that back to Lafayette and our communities in the United States.”