On a keyboard, Jackie Macri ’09 bangs out chords that open the song “Rolling in the Deep.” Propped in the wheelchair next to her, Uri Acosta drops her voice to a register that seems deeper than her 12 years.

“There’s a fire starting in my heart,” she sings, her brow creasing from the effort. “Reaching a fever pitch, and it’s bringing me out the dark.”

Acosta probably doesn’t know jilted anger on the same level as the song’s author, Adele. But the girl knows pain. And she knows how Macri, her music therapist for about half her life, can use a song to bring her “out the dark.”

On bad days, when the pain of trying to straighten her legs is too much, Acosta only wants to sing until it doesn’t hurt any more.

On good days, Macri and Acosta invent languages, make goofy noises, and joke in a way that makes more sense when you’re 12. Today is a good day. 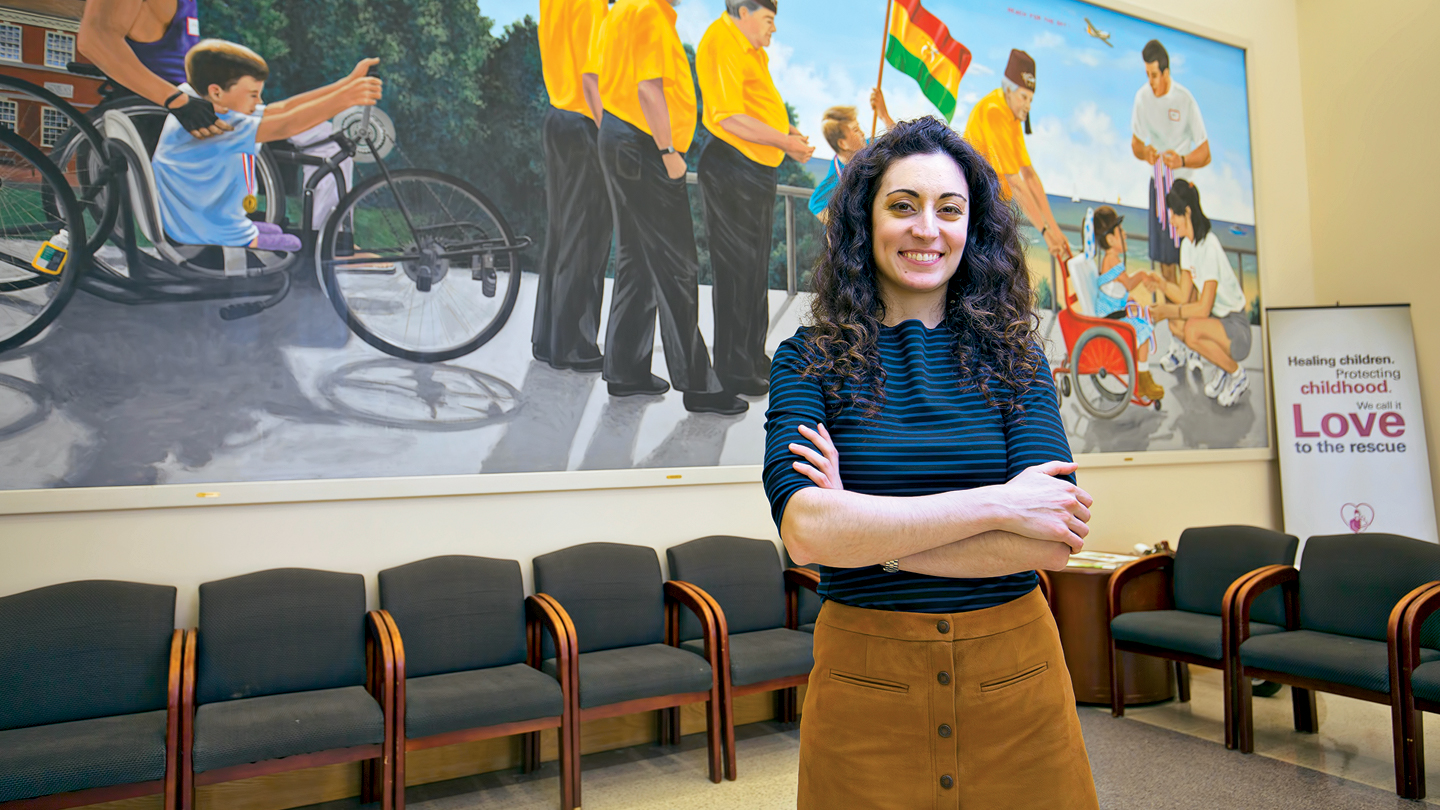 Walls of windows in the occupational therapy room at Shriners Hospital for Children gaze over miles of North Philadelphia rooftops. The room is painted and appointed to resemble a city, complete with a grocery store, roads, and a town square. In one corner of fake buildings marked Independence Square, Macri keeps her studio—really a closet-sized room hung with guitars and ukuleles. Acosta enters through the gate and promptly tells Macri she has a stomachache.

It evaporates soon after Macri sits at her keyboard. For a silly vocal warm-up, they trill like horses on helium, screech like dolphins on a date, and shout “Ma!” like toddlers with megaphones.

Soon they’re speaking in funny accents that seem to meld German and French.

“It’s from a planet,” Acosta says, “where they speak  … how do you put Uri and Jackie together? … Uraki!”

Macri hoots. “Uraki?! I like that. That sounds like a real language. All right. Let’s try Bruno.”

And they try “Grenade” by Bruno Mars. It’s silly; it’s fun, but the connection Macri and Acosta have forged is essential.

Acosta, who is staying in a nearby Ronald McDonald House on an extended trip from Colorado, was born with arthrogryposis multiplex congenita, a condition that causes her legs and arms to bend permanently. Doctors have straightened her legs with surgery, and now Acosta is trying to learn to walk via hours of painful physical therapy.

Macri’s music, as it has for so many other children facing a litany of maladies from birth defects to gunshot wounds, helps pull Acosta through.

The healing benefits of singing, playing an instrument, and listening to music are well-documented. Studies show music therapy reduces the perception of pain, boosts the immune system, decreases stress and anxiety, and can help improve everything from a patient’s speech to memory to balance.

The discipline gained traction as a form of treatment after World War II when professional and amateur musicians began visiting veterans hospitals around the country to play for soldiers suffering from both physical and emotional trauma, according to American Music Therapy Association. Doctors and nurses noticed such an improvement in patients that hospitals began hiring musicians as healers. The idea caught on and in 1944 Michigan State University founded the first music therapy degree program in the world.

Shriners Hospital’s music therapy program has become an important part of patients’ recovery processes at a facility offering orthopedic and burn care so specialized it draws patients from throughout the globe. From as far away as the Gaza Strip and South America, speaking every language imaginable, many come to Macri and her sixth-floor studio. Here, the marriage of art and science saves lives in a sense that couldn’t be more real.

A music and psychology double major at Lafayette, Macri didn’t always buy the notion that singing an Adele song did much to help someone with medical needs. Not at first. Now she sees it every day.

Take the time she worked with a physical therapist to help a 14-year-old boy with cerebral palsy learn to walk. That day, the boy grappled with his own body on a set of parallel bars, crying out from pain and frustration. Macri’s colleague, the physical therapist, was worried about him. At one point she said, “Just step up.”

Inspiration flashed. “You know how a song just pops into your head,” Macri says. She picked up her guitar and started playing “Steppin’ to the Bad Side” from the musical Dream Girls.

Within seconds, the boy’s head bobbed in time with the song. He sang along. Then, assisted by nobody but Macri playing her guitar, the boy stood and walked across the room.

He’d never done that before.

Macri gaped down at her own guitar. What just happened? she wondered.

Usually, it doesn’t work that way. Usually, you get to know a patient, find out what works, what doesn’t, what songs, rhythms, and music make the perfect salve. 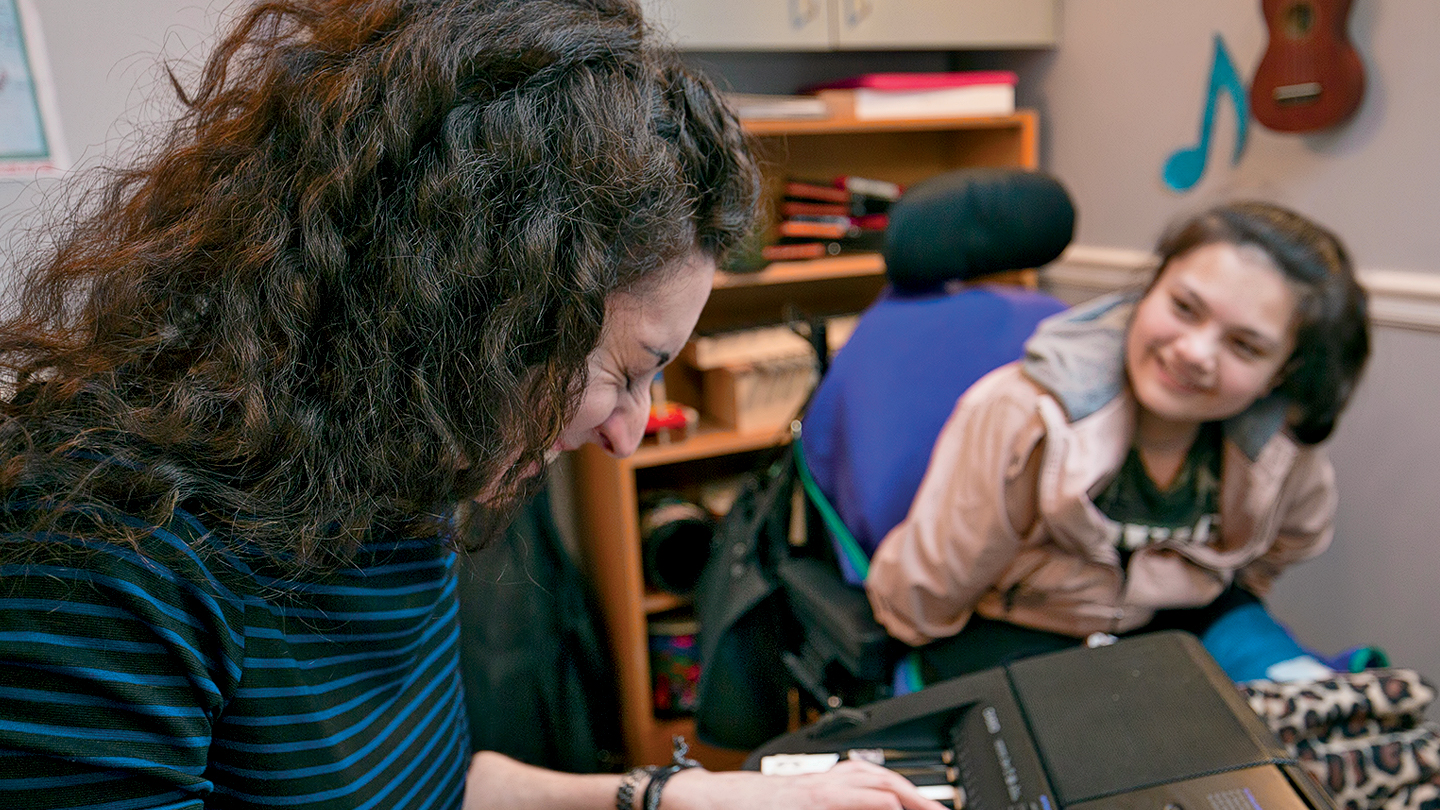 Macri presides over four types of sessions or “interventions.” One is a simple music lesson; a patient learns to play the piano or sing, and it gives the brain a new topic to chew on separate from anguish. Another is music re-creation, which is what she’s doing with Acosta, where both therapist and patient sing or play together. Other sessions are improv, where patients are encouraged to recontextualize their environments through free play. For example, Macri helps a patient fantasize about a place where the patient wants to be and attempts to create that place via music. And then there are times when she and her patients write and record their own songs.

The latter two are geared to give the ailing person jurisdiction over something. The kids receive long-term medical treatments that will change their lives, but can be painful, stressful, and at times impossible for them to understand. Their world has become a horror show. Many feel as if they no longer control their own bodies. Macri gives them music. That, they can control.

“Sometimes it’s a slow burn,” she says. You watch the effects of rhythm on a patient from one session to the next and search for its therapeutic value. Other times, you see how the emotion of a particular song helps allay a patient’s anxiety.

Once, Macri was working with a patient whose pain was so severe it was forcing the hurt person to cry. With her music, she sought to match the sounds the patient was making to try to forge a connection. The ailing person’s breathing slowly began to mimic Macri’s musical rhythm. Little by little, music created a connection. Macri understood the suffering. The sufferer felt a measure of isolation slip away.

Later, Macri was startled to find tears in her own eyes.

“It was a physiological response,” she says. “It’s hard to describe.”

For the first six months of her career, compartmentalizing emotions had been a challenge. She’d grown up as a stage kid, getting her start in musical theater at Papermill Playhouse in Millburn, N.J. She loved music, but she also wanted to help people.

At Lafayette, “I was an academic butterfly,” she says. “I liked to do everything.”

All of it comes in handy, she says, from her courses on clinical therapy to a class she took on children’s literature. “I feel as though I have a significant advantage because I was given freedom to have lots of versatility in my studies and didn’t have to focus on just one thing,” she says.

Macri had an internship at a regional Pennsylvania theater and continued to make music, but soon she began to feel the old pull of helping people.

“There’s a point where you forget why you were doing it in the first place,” she says. “It becomes about product; it becomes about selling something. Selling yourself. It gets really competitive. And the more that happens, the more disconnected you feel from what drives you to do it at all.”

After graduation she took a job with Meridee Winters School of Music in Ardmore, Pa., and obtained her master’s degree in music therapy from Immaculata University, where she still teaches as adjunct professor of voice.

For her first six months on the job as a music therapist, her own feelings were hard to navigate. While Shriners has always been such a positive place, Macri was seeing children suffering in ways that most adults couldn’t fathom. It was all so unfair. As an artist, Macri’s emotions are coal to fire the engine—one of many challenges of straddling two worlds. On one hand, she needs her feelings and empathy to create the connections essential for her to do her job. At the same time, you aren’t helping anyone by going around feeling bad for everyone, she says.

Like most therapists, Macri obtains therapy herself. She’s a member of communities of therapists who help one another cope. Now she finds that musician and therapist are far from mutually exclusive; in fact, they complement one another.

“You get to connect all the time with the reason you do music in the first place,” she says. “Now, as a musician and therapist, I’m less focused on performance and approval just for its own sake. It’s more using music for that root purpose of self-expression—or the arts in general—and for discovering different parts of yourself. I find that to be a much deeper experience than just performing.”

How do you know music therapy is even working?

It’s not always easy to manage progress during sessions that are, by necessity, noisy. After all, a kid banging a drum in your face repeatedly might do wonders for his recovery, but you don’t stop being human.

But the science part of the job is very real, Macri says. Music therapists set measurable goals for patients’ coping skills. Most of it is about relationships, how well music draws patients out of the shell their malady has molded around them.

When Acosta first began learning to walk, she was overwhelmed. She came to visit Macri and barely spoke. It took a while—a few songs into the session—to break through the pain. Soon Acosta was singing with abandon, belting out her own take on “Firework” by Katy Perry.

She’ll tell you straight out, ‘Music is what helps get me through.’

“Once she gets into that state, she’s able to articulate, ‘This really helped me, I feel a lot better,’” Macri says. “She’ll tell you straight out, ‘Music is what helps get me through.’”

This time, Acosta’s stomachache disappears in about three minutes. And shortly after that, she curls her lips over her teeth and raises her voice from the lower reaches of Adele to a string of high notes at which an opera singer might marvel.

“Ah, ah, ah!” she calls. The sound bounces off the windows. It’s a short strain from Mozart’s “The Magic Flute.”

“Uri!” Macri gapes. “I never heard you sing like that before. That was beautiful.”

The girl giggles and looks at Macri, wide eyed. “I could hear it echoing out there.”