When I was 22, I came to a fork in the road. Do I endeavor to pursue my true vocational interest of dentistry or sign an NFL contract with the New York Giants in the hopes of making the team?

At Lafayette in the late ‘60s, I’d majored in biology and was also the Leopards quarterback for three seasons. This year marks the 50th anniversary of the 1968 season when we were 7-3—the best record in 30 years. 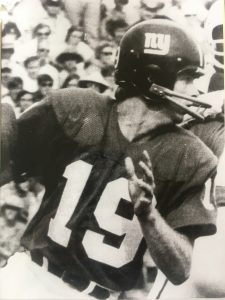 I never planned to play pro ball, but a couple NFL teams had expressed interest. Still, I was taken by surprise when I got a call from the Giants after the NFL draft concluded. I told Jim Trimble, personnel manager for the Giants, that I would come to camp if he would agree to pay me $3,500 to put toward dental school, and he did.

When I showed up for preseason camp, Y.A. Tittle was the quarterback coach. He felt I had the most potential of all the candidates, and soon the others were placed on waivers. During the first exhibition game against the Green Bay Packers on Aug. 8, 1970, I heaved a 55-yard pass into the arms of receiver Rich Houston for a touchdown.

Y.A. told me that I’d made the team, but I was fearful to let the Giants know that I was supposed to get married that next weekend. I needed to report back to training camp at 7 a.m. on Monday!

I spent two seasons with the Giants.

In the off-season I decided to enroll at University of Tennessee Dental School, where they allowed NFL players to attend a six-month session from January to June. It was nice to have that break from football.

After the Giants, I had a year as a Houston Oiler where I played my only pro game outside exhibition season. That game was all it took for me to set an NFL record.

In the final game of the ’72 season, we were losing to the Cincinnati Bengals 40-10. I took over in the second half. I completed some nice passes, but, unfortunately, threw three interceptions (on two tipped passes) that were returned for touchdowns, an achievement I now share with the San Diego Chargers’ John Hadl and Giants’ Eli Manning. We ended the season 1-13.

I told him that I needed $15,000
for dental school or I would not
be able to return.

The Oilers job ended at mini camp the following March when I met with Sid Gilman, general manager, and told him that I needed $15,000 for dental school or I would not be able to return. His reply was, “We don’t give dental scholarships.”

I played an exhibition season with the Raiders and was once again placed on waivers. I went back to dental school.

Two days into the new semester, New York Jets coach Weeb Ewbank called. Quarterback Joe Namath had separated his shoulder. I told Coach Ewbank that if he could make up his mind whether to place me on the team in a couple of days I would fly up. They brought in three other QBs, worked us out, cut the others, and signed me.

I had a Jets contract in hand for the 1974 season, but Joe was coming back. The best I could hope for was a third-string position, so I submitted a letter of resignation. It was the right decision not only for me but for my wife, who was completing her master’s degree at Memphis State.

A week or so later I got a call from Jim Garrett. You might know him as the dad of Lafayette head coach John Garrett and Dallas Cowboy coach Jason Garrett. Jim was the smartest coach I ever met in my professional career, and I met a lot of them. He was with the Giants during my stint in New York and was a booster of mine.

Jim had just become head coach of the Houston franchise in the new World Football League, and he offered me a two-year, no-cut contract. “Jim, I’m in dental school,” I told him. “I’m not coming down there.” He tried several times to change my mind, even calling me some names, but it was to no avail.

Looking back, I wore many jerseys, but the one that means the most is the one I wore as a Leopard.