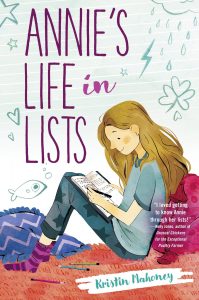 1. When Kristin McGinn Mahoney ’95 was a little girl she dreamed of becoming a children’s author. On May 29, that happened.

2. Her book, Annie’s Life in Lists, available from Knopf Books for Young Readers, tells the story of a shy fifth-grader with an incredible memory and a love of making lists.

3. Mahoney is a list maker herself. Here, she tells us about her memory, how her daughters inspire her, and how when she reads Sylvia Plath, the voice she hears comes from Lafayette. 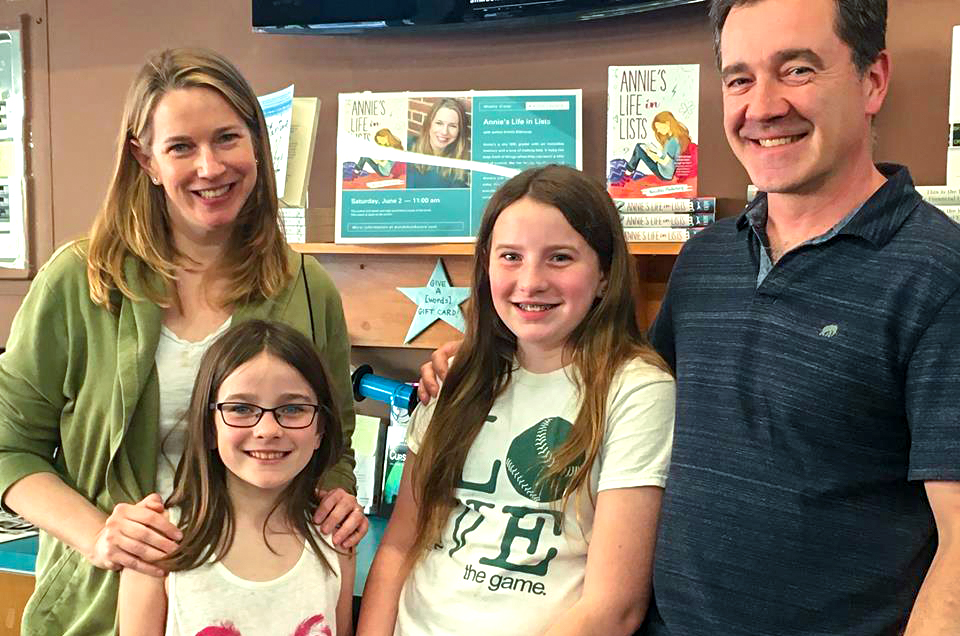 The Mahoneys at Words Bookstore.

I notice your website’s “about" section is a list. You’ve written a book about a character who loves to make lists. Are you a list maker?

Sort of. I don’t make nearly as many lists as Annie does (as I say in my bio, I mostly make lists about groceries I need and karaoke songs I want to sing). But I do often find myself making lists in emails, even ones that are just social; it’s a good way to communicate a lot of information clearly and quickly.

Who is Annie? Is she based on anyone?

She’s mostly based on me as a kid. I was relatively quiet and introspective, and I definitely noticed and remembered things about other people in a crazy amount of detail. My childhood friends still consult me when they can’t remember some little thing that happened in high school—but don’t ask me to tell you what I did yesterday.

Some of Annie’s adventures are based on other kids I’ve known. My brother accidentally rode his bike into a pit, and my older daughter got a comb stuck in her hair before her school Halloween parade one year. And then some things are just unique to Annie.

Where did the idea come from?

When my younger daughter was little, I noticed that she liked making lists about all sorts of things: businesses she wanted to run, supplies she would need for the business, pets she would like to have, names for the pets, etc. At first I thought it would be fun to write a much shorter book—like a picture book—about a kid who makes lots of lists. But once I got going, I realized Annie’s story could be much longer,  and that the whole thing could actually work as a series of lists.

What was your major?

I was an English major and an anthropology and sociology minor.

Was the goal to become a children’s author?

That was definitely a dream of mine as a kid, but by the time I graduated from Lafayette I wasn’t so sure. I knew that ideally I’d love to do something involving writing, but I also knew I’d have to figure out a way to pay the bills, and that dreams of being a book author might have to go on the back burner for a while. I worked as an editor in magazine publishing for several years. Then I went back to school for my master’s degree in elementary education and teaching literacy and worked as a reading specialist in New York City public schools. I stopped working full time when my second daughter was born, and when she started kindergarten I started thinking more in earnest about writing for children.

How did your time at Lafayette influence the book?

Hmm … most of the experiences and feelings in the book were inspired by my life before college. But I will say that the best thing at Lafayette that helped me keep a foot in the world of childhood was Prof. Susan Niles’ amazing Forms of Folklore class. Each student had to compile a collection of 50 forms of folklore (jokes, stories, games, etc.), and I drew heavily on my childhood memories for that. Recording and analyzing those artifacts was a great exercise for an aspiring children’s writer.

And of course I can’t discount my Lafayette friends … They were and still are some of the funniest people I’ve ever known, and being surrounded by sharp-witted people who make great observations is also terrific for writers.

How is Lee Upton as a creative writing instructor? What did she teach you?

Oh, Lee is wonderful! She was my adviser at Lafayette, and I think I took every class she taught. Certain poems can reach a person the way certain songs can and make you realize someone else really gets a feeling or an idea that you thought only you understood. But sometimes poetry is tricky, and it makes a big difference to have a shaman to help you navigate it. Lee was that shaman for me and for so many others in her classes. I still hear her voice every time I read a poem by Sylvia Plath or Sharon Olds.

Lee was also very supportive of all the writers in her Creative Writing class. She herself is a phenomenal poet and writer, and to hear someone so talented say that she thought my writing was good, especially when I was 19 or 20, went a long way toward making me think “OK, I can do this!”

What’s your process? When and where do you write?

I wish I could say my process was very disciplined … Ideally I’ll write when my kids are at school and when I’m not at my part-time editing job. But sometimes I’m stumped when the timing’s optimal, then struck with an idea much later. So I’ll find myself on a writing jag when I should be asleep. This is similar to how I worked when I was in college.

What’s on your desk?

Pictures of my family, including my husband, Whelan (’94), and our daughters, Lucy and Alice.

Some of my own really old pictures to help me keep my kid self in mind. A mug my friend gave me from the Strand bookstore that says, “I am secretly judging your grammar.” A mess of papers.

There are so many … I think Charlotte’s Web remains the gold standard for children’s novels; it’s just so beautiful and funny and sweet. And of course Beverly Cleary and Judy Blume are two of my idols. I think voice is one of the hardest things for adults to get right when they write for children, and those two nailed it again and again. And as a parent and a former teacher, I’m also realizing how important it is for kids to have books that reflect a wide range of backgrounds and experiences. Some of my old and new favorites in that regard are Roll of Thunder Hear My Cry by Mildred D. Taylor, Brown Girl Dreaming by Jacqueline Woodson, Esperanza Rising by Pam Munoz Ryan, Finding Someplace by Denise Lewis Patrick, The Whole Story of Half a Girl by Veera Hiranandani, and The Hate U Give by Angie Thomas.

On your website, you mention how your daughters give you ideas for stories. Did they read Annie’s Life in Lists? What did they think?

They did, and they both liked it, or at least they told me they did. My favorite story about that is that Alice (my younger daughter, who was 8 at the time) read a very late draft of the book and found a mistake in it. I was pretty impressed that she caught something that had escaped my notice and the scrutiny of several professional editors. Needless to say, that’s one of her favorite stories now, and luckily there was time to fix the mistake before the book went to print.

How did you become connected with Rebecca Crane? How did she go about capturing the characters and story from your imagination?

Rebecca was hired by the design department at Knopf to do the cover and interior illustrations. I wish I knew more about her process; we’ve actually never met. I think she lives in Australia. But she must have read the book very closely because she did a fantastic job. It was such a thrill for me to see her drawings of the characters I’d thought up.