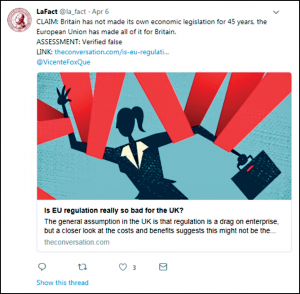 As former president of Mexico Vincente Fox and the U.K. leader of Brexit Nigel Farage sparred in Colton Chapel over which is better, globalism or nationalism, a group of 21 students and faculty met in the basement of Skillman Library to fact check claims made during the debate and then post their findings on Twitter and Facebook.

In two hours, the team identified 129 claims and researched 19. Results were posted at the feed @La_Fact.

Earlier in the day, faculty held a panel discussion to ground the campus on issues likely to be discussed by the leaders.

Daveed Diggs catapulted into stardom portraying a founding father. But not just any founding father: our founding father. Diggs, who won a Tony and a Grammy award for his Broadway debut as the Marquis de Lafayette in the musical Hamilton, spoke to a packed house in Colton Chapel April 10 as the Senior Speaker, an event supported by the Class of 1963 Speaker Endowment Fund. Diggs signed autographs and even complimented the artistic talents of our own President Alison Byerly for her lip-sync rendition of “Guns and Ships” for the President’s Challenge for Financial Aid.

Thanks to a gift from Bradbury Dyer III ’64, the former IDEAL Center for Innovation and Entrepreneurship is being significantly expanded.

The center has been renamed after Dyer, whose gift also funded an endowed position—the Bradbury Dyer III ’64 Director of the Center for Innovation and Entrepreneurship, held by Yusuf Dahl.

“In order for the Dyer Center to truly be on par with best-practice institutions, it must offer a blend of curricular, co-curricular, and experiential experiences,” says Dahl.  “As the Dyer Center expands and evolves, we are seeking the engagement and expertise of more alumni entrepreneurs and working to grow initiatives, including a summer accelerator, seed money for student business ideas, internships at startup companies, and more. Through the generosity of Mr. Dyer, the College will be better able to adapt to the marketplace and ensure that students remain globally competitive.”

The Dyer Center will be on the third floor of Rockwell Integrated Sciences Center when it opens in fall 2019. It will feature shared work space for student entrepreneurs, a maker space for prototyping, and offices. 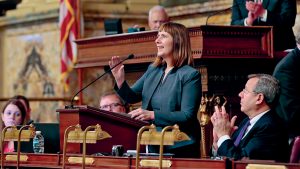 President Alison Byerly addressed the Pennsylvania House of Representatives on May 2 about the positive impact higher education has on the state and urged continued support of the Pennsylvania Higher Education Assistance Agency, which provides financial aid to college students. Celine Lawrence ’20 and Bryan Cocco ’20 joined her for the visit to the State Capitol in Harrisburg.