What can we learn from our pioneering African American forefathers? How can their fortitude and determination be an inspiration for Lafayette students today?

In 1838, two African American slaves, David and Washington McDonogh, arrived at Lafayette. Their owner, John McDonogh, was a proponent of colonization and intended to educate them to become missionaries in Liberia. Washington continued on to Liberia, but David was determined to become a physician. In 1844, he became the College’s first black graduate and went on to attend classes at the College of Physicians and Surgeons in New York. Ultimately, David was the first black staff member at New York Hospital and New York Eye and Ear Infirmary. 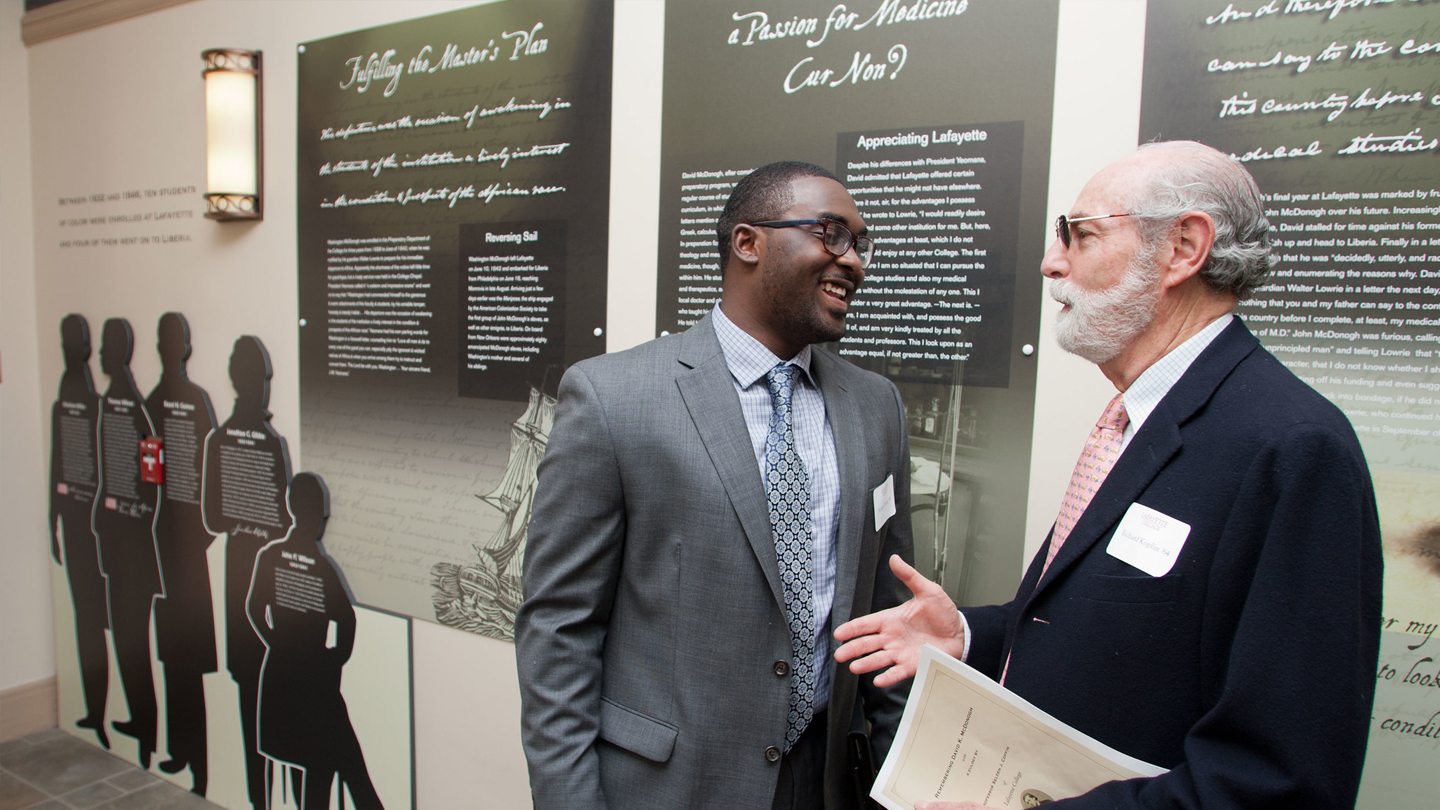 Robert Young ’14, curator of Tales of Our Brothers, speaks with Dr. Richard Koplin ’64, whose generosity supported the exhibit during its opening in 2013.

Their time at Lafayette was not easy, and an entire century lapsed before the College admitted another African American student. But today, the McDonogh name is becoming more and more recognizable at Lafayette. Named after David McDonogh, the McDonogh Network is an active organization that spans multiple generations of Lafayette alumni and students, promotes programs and mentoring, and offers career opportunities for students and alumni of color. In addition, if you visited campus over the last 10 years, you will notice the large sculpture, Transcendence, which stands adjacent to David Bishop Skillman Library. It was created by Melvin Edwards in 2008 to honor David McDonogh.

A milestone occurred in 2013, when the Tales of Our Brothers: The Journey of David and Washington McDonogh exhibit was unveiled at Pardee Hall. The display was curated by Robert Young ’14 while he was a student in conjunction with Diane W. Shaw, former College archivist. It features the stories of Aaron Hoff 1836, the McDonogh brothers, and several others who were among the first African American graduates of Lafayette, who continue to serve as inspiration for students and alumni today.

“The intent of displaying the exhibit in Pardee Hall was to educate the larger community on its institutional history,” says Young, who now serves as Lafayette’s associate director of annual and leadership giving. “Since 2013, the exhibit has morphed into an Africana studies and anthropology and sociology course, panel discussions, and further archival opportunities with our Special Collections department.”

Tales of Our Brothers was made possible through the generosity of Dr. Richard Koplin  ’64 who has supported much of the research into David McDonogh’s past. Both Koplin and David McDonogh practiced medicine at the College of Physicians and Surgeons (later Columbia University Medical School). In 2016, National Medical Fellowships held the inaugural Dr. David Kearney McDonogh Scholarship in Ophthalmology/ENT reception in New York City, further honoring the accomplishments of the first African American to graduate from Lafayette.