Let’s take a quiz. Which of the following might keep a vice president of development up at night?

By Kimberly A. Spang with Mark Eyerly

Your feasibility consultant suggests a stretch goal of $300 million; the Board of Trustees asks you to raise $400 million.

The campaign is in its “leadership phase” when:

After the campaign’s launch, the new president suggests doubling the target for financial aid support.

Alumni, leadership, faculty, and staff of what institution would treat each and every one of the above challenges—and many others—as opportunities to make the campaign’s appeal even more fresh and powerful?

I’ll give you one hint: Look in the mirror. We couldn’t have done it without you.

Mettle is not a characteristic frequently attributed to elite undergraduate colleges. But the Live Connected, Lead Change Campaign proved that at Lafayette College, we have more than enough moxie to go around. 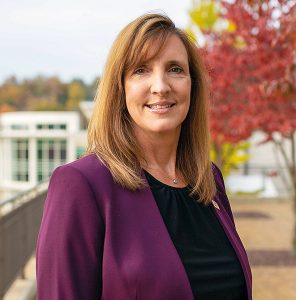 Personally, the true grit that played a part in our success goes all the way back to 2002, when I returned home after 10 years in sales and marketing with Walt Disney World and spent an entire year trying to become a major gifts officer at Lafayette. During that year I worked as an admissions counselor at DeSales—learning firsthand what a small private school means in the lives of its students—and I eventually landed that Lafayette job, later earning promotions to director of the annual fund and advancement services, and then associate vice president.

That 2008 recession didn’t derail us; we merely focused on raising funds for highly visible projects, such as transformation of the Quad into a pedestrian paradise. President Dan Weiss’ departure didn’t derail us; his goals continued to guide our fundraising. Alison Byerly’s inspiring strategic direction built nicely upon those ongoing efforts, as it sought to elevate Lafayette among the nation’s best colleges.

In March 2014, two weeks prior to the board meeting at which trustees would adopt the $400 million goal and fewer than eight months before the public launch of the campaign and 150th football game between Lafayette and Lehigh in New York City, former vice president of development and college relations Jim Dicker ’85 P’18’22, who (along with Gary Evans ’57, trustee emeritus,) taught me everything I needed to know, and more—announced he was accepting the vice president’s job at Temple. Panic? Nope. We knew that Jim had already started countless conversations that would form the foundation for our success.

And as a new vice president serving a new president, I learned quite a few things about Alison. Chief among them: She’s tireless; she sweats the details (the Live Connected, Lead Change logo was hammered out on a telephone call with our consultant as we drove along I-75’s Alligator Alley); and she didn’t mind (too much) a swing through McDonald’s when the schedule left no time for a real dinner.

There were humorous hiccups too. A fruit smoothie (size large, of course) exploded all over me while my flight to Atlanta queued on the tarmac. A man sat next to me at a Cosi in Philadelphia and surreptitiously removed cash and credit cards from the wallet resting in my purse, a theft I noticed only when grabbing my wallet for a business card to hand to the alumna with whom I was having lunch. My passengers (a major donor and the president) joked about needing seatbelts when I got a new campus golf cart hung up on the steps outside Williams Center for the Arts. (We still got that gift!)

So there you have it. Fearlessness, determination, and a little adventure on our way to $425 million, 6.25% beyond our elongated stretch goal. It wasn’t textbook, but that’s what a talented development team, strong trustee leadership, the vision of two presidents, dedicated faculty and staff, and inspired alumni, parents, and friends of the College can do! On behalf of everyone at Lafayette—including generations of students, faculty, and staff to come—THANK YOU!

Now, while I have your attention, can we talk about the President’s Challenge for Financial Aid? How about helping to create a championship culture for athletics? Investing in STEM? The Climate Action Plan? The six areas of focus in our academic plan? Gateway Career Center? …

Kimberly A. Spang is the proud and grateful vice president of development and college relations.